Motherhood: God doesn’t call the equipped, he equips the called 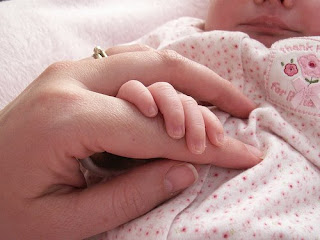 I’ve come across a series of posts and comments lately related to the topic of determining God’s will for how many children you should have. I’ll pick on a commenter named Sarah, only because she offered a clear articulation of the point of view I’ve been puzzling over. In response to my interview with Hope, she wrote:

I would like maybe four kids total…I cannot imagine having 7, 8 or more. My husband and I are just not cut out for that.

My initial reaction to statements like that is always, “Whoa! Does that mean there are people who actually think they are cut out for that?” In my life I’ve known one or two couples who, early in marriage, thought that they had what it takes to have five or six kids…and then had a drastic change of mind, usually around the time when the second baby started teething.

It seems to me that if God called only natural “supermoms” to have large families, there would be like five women in America with more than three kids. Maybe I’m doing some projecting here since I lack pretty much every skill one would want to be a mother to anything other than a Chia Pet, but I’ve come to believe that when it comes to having kids, nothing is more true than the old saying that “God doesn’t call the equipped, he equips the called.”

And this is good news for people like me. Because I am “equipped” to do very little, least of all be a mother. When I try to come up with a list of things at which I naturally excel, that are easy for me because of some innate skillset, the train of thought goes something like, “I like to drink wine…and eat stuff. Umm…I’m good at reading blogs…”

As a person who is still getting used to difficult concepts like cleaning up after myself and doing my own laundry, motherhood is, not surprisingly, a big challenge. My loving parents wanted to give me the “perfect childhood”, which meant having to do almost nothing for myself. I was expected to get good grades, but didn’t have to lift a finger around the house. My home environment was quiet and orderly, kept in tip-top shape by my mother alone while most of my time was spent relaxing. I had no experience with young children until I had one — I’d never even known people who had little kids except for one aunt who lived out of state. I never babysat because that sounded too much like “work”. I’m naturally introverted, impatient, disorganized, self-centered, irritable, and have an extremely low tolerance for noise and chaos. The closest I get to being a supermom is when I make sure that whatever the baby is eating off the kitchen floor is actually food (and the closest I get to being neat is when I think, “Cool, I don’t have to sweep now.”)

It is from this background that I can proclaim with great joy that God does indeed equip the called. If three years ago I had had all the facts about what motherhood really entails and sat down to carefully analyze whether or not this is an endeavor I should undertake, the overwhelming verdict would have been to get a goldfish and call it a day.

What I couldn’t have known in my pre-kid days, though, is how much God was planning to use motherhood to transform me. I would never have guessed that the experience of holding my first newborn baby would be one of the final blows to my life of atheism; I could not have known that the difficulty of managing a strong-willed toddler and a very loud redheaded baby with a redheaded temperament would push me to a level of depending on God that I would have never sought on my own; never in my dreams would I have thought that an unexpected, untimely, potentially financially ruinous pregnancy would bring with it a series of experiences and answered prayers so profound that I’d never be the same again. And, of course, I cannot imagine what God is planning for these three little souls I’ve helped bring into the world. I can be certain, however, that the world is a better place for them being here.

When I think of my life as a mother and the future of our family, I’m reminded of that great poem They Weren’t Ready. I now see the decision-making process for how many children I should have solely as an issue of accurately discerning God’s will, rather than approaching it from the perspective of what I think I can do. I assume that God knows my limits and he’ll take into account my weaknesses in his plan for the number of children I should attempt to parent.

And who knows, perhaps after this next baby gets here God will clearly reveal his will to be something like, “Quit having kids! Now! Just try to keep the ones you have alive!” I think, however, that I am called to have a fairly large number of children. And it’s hard not to second-guess that call. I often think that I just don’t have what it takes. But then again, who does? What sane woman who currently has few or no children could confidently say, “I could definitely handle six, seven, eight kids — no sweat!” I think that almost nobody could do it on her own, without God’s grace.

Of course not every family is called to have lots of children — I don’t mean to imply that every couple who decides that a small family is best for them isn’t following God’s will. I only offer my experience as a testament to the fact that when making decisions about bringing new lives into the world, we should focus a lot more on accurately discerning God’s will and a lot less on our own assessment of what we think we can and can’t do. As I have found, God sometimes calls people to do very unlikely, seemingly impossible things — especially when it comes to parenthood. But he does, indeed, equip the called.

photo by Chris and Jenni

« "The finger of God is here"
Building a house of cards »