I was going through my email yesterday and came across this one that my dad sent back in late 2005, when he first moved to Abu Dhabi in the United Arab Emirates for work. I thought it had some amusing and interesting stories from life in a modern Muslim country. Here are some excerpts (click on the photos to enlarge):

Some updates from life here in Abu Dhabi… 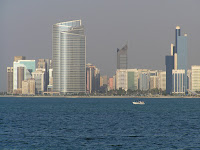 At the office, there is a good atmosphere even though senior managers have to wear a tie every day. There is none of the barbaric custom of having to go to a coffee pot to get your coffee. By the time I have my computer booted up in the morning, a gentleman in a coat and tie brings coffee to my office, in porcelain cup and saucer and it’s fixed to my taste. We pick what we want for lunch off e-mail and it’s delivered to our office. Also, I can tell when it’s near prayer time here in the office because the men’s bathroom looks like they just had a water fight. The men wash their feet then put on shower shoes and go to a makeshift mosque we have in the parking lot. I assume the women do the same but I don’t spend a lot of time in the ladies’ room. 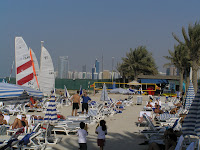 One thing that shows the European influence here is the bidets in every bathroom. The funniest one is here in the office where there was no room for a separate bidet, they have a spray hose like on a kitchen sink hanging next to each toilet.

I moved into my apartment last Wednesday and it was good to get out of the hotel even if it was a Hilton. The apartment is nice and spacious with tile floors. One thing that I was glad to find out by accident ahead of time is the switches for the bathrooms and kitchen include one that turns on the hot water heater. Each bathroom and kitchen has its own HW heater and apparently people don’t leave them on all the time. I don’t know if it’s a savings thing or a safety issue so I turn mine off just in case. This requires a little planning for showers and shaving.

One thing I wanted to hear was the Holy Men’s “call to prayers” that they chant from the Mosques. No problem. Right outside my living room and bedroom windows is a loudspeaker tied to the nearest Mosque, which is so loud that it rattles the windows. I especially like the 5:30 AM chant. It probably won’t be long before I roll out of bed and hit the rug on the floor when I hear it. I’ll bow toward Texas.

Speaking of which, over the weekend I talked to a guy who had just come here from Saudi Arabia. His company was expanding a hospital in Riyadh, and naturally there was a mosque attached to the hospital. A couple of his coworkers got into the mosque and replaced the call to prayers tape with a Rolling Stones tape. A full investigation was launched, the two were found, flogged and deported.

As I have said before, our weekend is Thursday and Friday. I may never get used to that. Thursday morning I didn’t have anything to eat in the apartment so I followed an Arab custom I’ve seen: I went across the street to the Abu Dhabi Mall and went to Starbucks and had a Colombian Venti and banana bread muffin. Later I returned to the mall for supper and had my choice of Hardee’s, McDonalds, Chili’s, Popeye’s, Famous Amos, Baskin Robbins among others. They had a Mexican food place that I haven’t ventured to yet. I did look at the menu and saw “Mexican Wraps” (soft tacos). McDonalds has a “McArabia” which is some kind of meat and spices in their version of a thick tortilla. 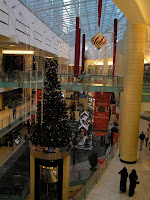 When I went to the grocery store I found Old El Paso brand jalapenos, tortillas, refried beans and chili fixings so there is some civilization here (though where is Mission brand???). Also, they have about 78 different brands of honey but not a single bottle of syrup. This is a store that caters to foreigners, so they have a the little room in back where they have pork. I bought two packages of bacon and some hot dogs (mmmmm!!!!) A package of Oscar Meyer bacon is $8.00, but I didn’t care.

The A D Mall makes a lot of upscale American malls look like strip centers. It is four floors of stores and I swear every other store is a jewelry store and I don’t mean costume stuff. It’s the good stuff. Same with clothes. One thing that was surprising was the Santa Claus and reindeer display at the entrance. I’ll bet the kids wonder what the white stuff is around the sleigh. (And notice the Christmas tree in the attached picture!)

Driving here is really different. I don’t like to talk on a cell phone when I’m driving anyway, but a golfing buddy of mine did it last week when his Bluetooth was broken. A cop saw him and they took his driver’s license away. It will take a while and many dollars to get it back.

This same guy has a friend who, in frustration, made a common street gesture to another driver. The other driver flagged down a cop and the guy was arrested, jailed and his car impounded. I may have been guilty of that a couple of times since I’ve been here. My luck I would flip off a sheik’s son and they would cut off the offending finger.

I got to see a Sheik Convoy the other day. When a sheik travels by car, the road is closed for him. When I was going home a couple of days go, the southbound lanes of the road were closed and there were police at every intersection making sure no one got on the road. In a few minutes here came six police cars in a V formation followed by some lesser cars, then the big limo followed by an ambulance with military vehicles behind, all going about 80 mph.

Sheik Zayed the 1st, who had the idea of creating the United Arab Emirates, is also the person who started planting trees all over the place. My dad said that during the broadcast of the A D Championship golf tournament the announcer said they had planted over 100 million trees. I heard that about a year ago a contractor was doing some road work and the trees were in his way so he dug them up. The next morning, Sheik Zayed’s convoy was flying by and he saw the trees gone, stopped the convoy, got out and started whacking the workers with his cane then canceled the contract. 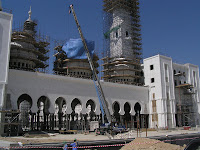 Last week we were given a tour of the Abu Dhabi Grand Mosque that is still under construction (see attached photo). It is amazing. It will be the second largest mosque in the world, second only to the one in Mecca. Apparently the original minarets were taller than the ones in Mecca and a delegation showed up to counsel them on who’s who and the minarets were lowered. They are still 300 feet high. Thirty stories.

The work has been ongoing for 10 years. There have been several changes of construction mangers and designs. Also quality control is unbelievable. After the basic mosque was built it is now being covered in pure white marble from a quarry in Greece. They were going to use the same quarry that did the Taj Mahal but it couldn’t keep up. The marble coverings are sections that are from 1 inch to and inch and a half thick. Most are going to be on a curved surface, many on a compound curve like a dome. They were all cut, shaped, numbered and shipped from Greece.

Anyway, that’s most of what’s new here. Hope everyone is well and has a great holiday.

Just thought I’d share in case anyone else finds this kind of thing interesting!

« Lunch with Big Mama
Why I was a pro-choice vegetarian »