The other day the kids were watching Barney and he started bouncing around and singing Pop Goes the Weasel with his goofy-voiced dinosaur friends. You know the economy’s bad that I interpreted it to be a mournful dirge. Recalling something I heard once that “popping” the “weasel” was some reference to pawning a valuable items when times get tough, I nodded bitterly as I heard: 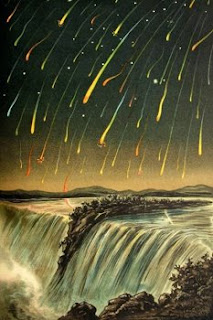 Neat story: there’s an oral tradition in my family — told to me by my 94-year-old grandfather, who heard it from his grandmother — that one night there was a great meteor shower that was so intense that everyone thought the world was ending, and our family members were scared.

I Googled around and found that this story almost certainly refers to “The Night The Stars Fell, ” the famous Leonid meteor shower in November 1833. I thought that was so neat to know about a historical event from family oral tradition alone! Also, here are a lot of interesting stories that came of it that I found in my research: here’s a first-hand account (scroll down), and here’s a story about what slaveholders did when they thought it was Judgment Day.

Thank you for all the great comments about how to make your own yogurt. Unfortunately, I will not be doing this. Not in my house, anyway.

When I told my germ phobe husband about the great techniques I learned that will help us save money by making our own yogurt, I watched his face contort into various expressions of horror as I said things like “…while you let the milk sit out overnight…” and “…then you keep it warm so that the bacteria can incubate and grow…” He abruptly announced that he chooses to believe that yogurt comes from yogurt fairies who fill the jars at the store with magic wands, and that he does not want anything to happen in this house that would shatter that image for him.

I was going through old emails and came across this one from my dad about his experiences with Ramadan while living in Abu Dhabi (more about that here). I thought I’d share in case anyone else finds it interesting:

I have some mixed memories of Ramadan. I remember how impress I was that they could do it. One day I ate breakfast before sunrise and, because of meetings, didn’t eat again until 2:00 PM. I thought I was about the die. The Muslims still had about four hours to go.

I learned not to drive on the roads or streets in the last half hour before sunset. The people heading home to eat are almost panic stricken and their driving showed it. I only did it one time because I didn’t think about it. I was running an errand after work and was wondering what the heck was going on. It was so crazy it was unbelievable!

In the Middle East the official word that Ramadan has started comes, of course, from Mecca. I pictured some Holy men in the top of the minaret at the Grand Mosque looking for the new moon. NOT! They went up in a corporate jet. THAT surprised me.

One day I went to the mall across from my apartment to grocery shop right before sunset. I had to cross one of the widest, busiest streets in Abu Dhabi. While I was shopping I heard the sunset prayer. When I came out, that street was completely empty.

I thought it was interesting, particularly how many people observe these long fasting periods.

To the commenter named Sara who just left a comment to this post: as you may know from perusing the extensive scorpions category on this site, I have made a certain peace with living in a scorpion-infested house. However. When you have scorpions FALLING INTO THE BATH WHILE YOU BATH YOUR BABY and ON YOUR KITCHEN TABLE, it is time to move. I hear that Barrow, Alaska is lovely.

I’m sorry about #5. There’s something about the topic of scorpions that makes me UNABLE TO TYPE WITHOUT USING THE CAPS LOCK KEY.

Back when I did my own post about using Magnart, I had to laugh when I compared my post to Dooce’s original, where mom Heather Armstrong wrote of the artwork she used her Magnart to hang:

It’s the red version of a silkscreen print from Wayne Pate of Good Shape Design. I bought it the first time I saw it because it matches the Flor tiles in our living room perfectly.

Ah, yes. I should have mentioned to my readers that I was hanging the limited edition print “Red Blob on Construction Paper” that I chose because it offered an interesting contrast to the permanent marker stains mixed with crushed raisins on the living room carpet.

Have a great Tuesday night, everyone!