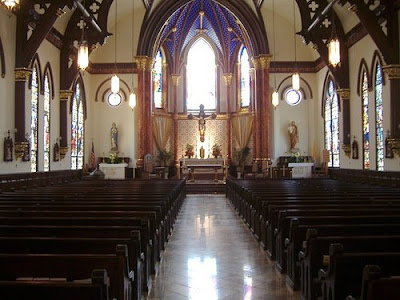 As soon as I post this I have to start getting ready to go with my husband to the Red Mass, a Mass held by the bishop for Catholic judges, prosecutors, attorneys, law school professors, students, and government officials. For some reason, this is always one of my favorite nights of the year. Every year I try to write a post about why this night is so special to me, and every year I give up because I can’t quite put it into words. Though I’ll probably fail again this year, I thought I’d give it a shot.

Maybe I spend weeks looking forward to the Red Mass because it’s held in the beautiful old downtown cathedral (pictured above), and the tradition of the Red Mass is more than 700 years old (the first one was held at the Cathedral of Paris in 1245). There’s nothing like participating in a 2, 000-year-old liturgy as part of a 700-year-old tradition in a 150-year-old church to overwhelm you with the fact that, truly, you are just a part of God’s epic story — not the other way around.

Maybe it’s the ambiance. I remember the first Red Mass we attended, in 2006 before we converted, and how I was moved to tears when the choir began belting out a flawless rendition of Beethoven’s Ode to Joy as the entrance procession began. I saw the bishop walk by, then almost a dozen priests from around the diocese (a sight which would have moved me to tears in and of itself, since I was still absorbing the concept that there really are people left in the world who give their whole lives to God), followed by the smiling faces of various ministers from other Christian denominations — all walking in their elegant robes behind a gilded crucifix, hoisted high in the air, the way you might hold the flag of a conquering army.

Maybe it’s the idea of so many people throughout the legal profession coming together to seek the guidance of the Holy Spirit in all that they do; that afterwards we always meet so many fascinating, likeminded people who are a pleasure to talk to.

Or (let’s be real) maybe it’s the fact that various local law firms put together the reception, which is usually held at an exclusive private club, and it’s an amazing spread of delicious food in an oak-paneled ballroom. And there’s an open bar. (I promise, I promise, I’d still love the event if it weren’t for that!)

But I think that the biggest factor might be that the Red Mass was the first Catholic event that my husband and I were ever invited to (probably the first non-Sunday religious event I ever attended), and it also falls within days of our anniversary each year. So as we sit on the balcony of the hotel restaurant that we like to go to to spend some time together after the Mass and reception, sitting in the perfect Texas nighttime air, talking about life, the evening always reminds me of my marriage, and of becoming Catholic — the two best things that ever happened to me.

Thanks to Abigail for letting me call her and hum into the phone so that she could tell me that that song I was thinking of was Ode to Joy. Speaking of which, here’s a cute video version I stumbled across while Googling around to make sure I had the right song:

Can you sense the Creator, world?
Seek Him above the starry canopy.
Above the stars He must dwell.
– Ode to Joy