Though I read the Two-Income Trap a couple years ago, I find myself thinking about it frequently given the current conditions of the economy. Harvard Law professor Elizabeth Warren wrote it in 2000, but the topics she covers are very relevant to what’s going on now. Re-reading the book the other day, I found that it left me with a ton of thoughts about not only my own financial situation but some of the trends going on in the overall economy today. I was going to just mention the book in a book chat post, but thought I’d share a bit more at length since I find it so interesting and since this is a topic on many people’s minds right now.

We live in a treacherous financial climate

The materialism and overconsumption that plagues our culture is an interesting topic that other books have explored in depth (and that I’ll probably do another post about as well). But this book takes a much-needed look at the other side of the coin: the disturbing practices of the lending industry that became widespread after a change in laws in the late 70’s incentivized states to cooperate with banks to allow them to charge exorbitant interest rates and thus drastically increase their profits. Warren offers a good analogy when she writes:

My father used to talk about Herring Hardware, a farm supply store that my grandfather had run in rural Oklahoma beginning back in 1904. When the Dust Bowl hit in the 1930’s and families could no longer scratch a living out of their modest farms, many packed up and headed west…Some of those families never forgot the debts they left behind. Twenty years later, my grandfather would still get an occasional envelope with a few twenty-dollar bills…My father would lean back at the end of one of those stories and remark that these were “good people, good people who followed through on what they owed…Folks just aren’t like that anymore.”

But my father overlooks one very important fact: Borrowers aren’t the only ones who changed. Lenders changed too, and far more than the people to whom they were lending…When a borrower makes a partial payment, when he misses a bill, and when his credit ratings drop, he actually gets more offers for credit…He has joined the ranks of an elite group — The Lending Industry’s Most Profitable Customers.

Warren then goes on to recount a story of when she gave a presentation to Citibank where she pointed out that if they stopped lending to people in financial trouble, Citibank could cut their bankruptcy-related losses by 50%. The room got quiet and an executive said, “We appreciate your presentation. We really do. But we have no interest in cutting back our lending to these people. They are the ones who provide most of our profits.”

She goes on to make this analogy from her grandfather’s hardware store:

The strategy used by today’s lenders exactly reverses the approach bankers used a generation ago when their main goal was to be repaid on time…Herring Hardware may have collected most of its debts but its lending policies were radically different from those embraced by today’s major lenders. Unlike today’s megabanks, Herring Hardware stopped making loans when a family got in trouble. Grandfather Herring would never have dreamed of sending a flyer in the mail cheerfully suggesting, “Fred, you’re behind on your payments for the fertilizer. Can we lend you the money for a new cookstove?” Nor would the local bank have suggested a second mortgage to the family that had just missed a payment on its first mortgage.

What I took away from this part of the book was that, yes, people need to be responsible for their own financial decisions and be cautious not to get themselves into trouble. However, in this new lending climate our fallen natures are up against big banks who are throwing all their weight behind getting people into debt; the average person today has to be far more savvy and able to resist temptation than the average person 30+ years ago. 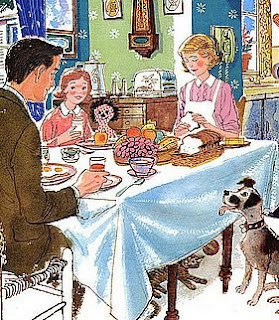 Here is probably the biggest takeaway I got from the book: it’s time for us (“us” meaning “me”) to rethink standard of living. People didn’t used to have to be quite as cautious about getting overloaded on fixed expenses; for example, banks would probably only offer you a loan for a house if you could put 20% down and if the monthly payments would be no more than 50% of your monthly income. No so today. We are constantly tempted to live a little (or a lot) higher on the hog than we really should.

There are definitely people out there who use modern banks’ questionable lending practices to get the biggest McMansion on the block out of sheer greed, signing up for mortgages that are blatantly unreasonable given their incomes. However, I think there are plenty of others out there who get in over their heads mostly out of ignorance about what a reasonable mortgage should look like. My husband and I made that mistake once.

Until I read this book I didn’t know what the traditional ideas were about what percentage of your monthly income should go to mortgage, and back when I did the math on what the payments would be for our downtown condo it seemed reasonable enough. We’d be able to make the payments and the HOA fees with what seemed like plenty of money leftover each month. On paper, it worked out great. But life threw us some curve balls and we quickly realized that our mortgage payment was too high. Luckily it all worked out and we were able to sell the condo and do a major lifestyle downgrade, but it gave me a new sympathy for people who find themselves overextended. A lot of people end up in that position out of not having the benefit of traditional wisdom about what percentage of your income you should dedicate to your various expenses, and out of not understanding just how unrealistic society’s expectations have become about standard of living.

Which brings me to the most interesting point:

Warren points out that, due to a lot of factors which she details in the book, the average family in the early 1970’s spent only slightly more than 50% of their income on fixed expenses: mortgage, childcare, insurance, car, debt payments, etc. She also makes a compelling case that when those fixed expenses take up too much more than 50% of a family’s monthly income, they’re in a very precarious position financially.

I remember when first did the worksheet in her budgeting book, All Your Worth, and added up our fixed expenses to see what percentage of our monthly income they took up. It wasn’t pretty:

When I added all that up…let’s just say it was more than 50% of our monthly income.

Even though we’d done a big lifestyle downgrade and were living in a much more reasonable house, I still marveled at how difficult it would be to get all those figures to add up to a number that we could pay with just one of my husband’s two monthly paychecks. Granted, a lot of our fixed expenses are bigger than they would have been if we’d lived decades ago because of factors out of our control, like rising health insurance costs or gas prices; yet that doesn’t change the fact that when fixed expenses start creeping up past the 60% range, you’re overextended (we know a lot of bankruptcy lawyers, and they all emphasize this heavily). And the more overextended you are, the more likely it is that you’ll face major financial problems if even minor unexpected events arise.

So this is what’s been on my mind lately:

First of all, given the modern lending climate, I’ve realized that I have to be much more astute than I’d realized to avoid getting in over my head, and that this is something I need to emphasize with my children as they grow up as well.

Secondly, I think our family might need to re-think what a reasonable standard of living is for us. I can’t directly change the fact that our health insurance is extremely expensive, that our property taxes are too high or that gas and food prices are crazy these days. However, I can drastically re-set my expectations in terms of what sort of house we should be living in, what kind of car we can really afford to drive (shoot, for that matter, whether we can really afford two cars), what constitutes “basic food needs, ” etc. I could admit that for too long I’ve been categorizing all sorts of luxuries as “needs, ” not really putting much effort into drastic cutbacks on the grounds that I “need” all sorts of things that are really not necessary for survival (or even a modestly comfortable lifestyle) at all.

I’d had it in my head that if/when my husband’s salary increases we’d get a slightly bigger house since at that point we’d have four children, and we’d “need” a bigger house since ours is only three bedrooms and less than 2, 000 sq. ft; I figured we might get a minivan with less than 120, 000 miles on it (maybe even one that has a door handle that actually works!); I thought we’d get back to buying fancy cheeses and sushi at the grocery store every now and then. But now I see that, if and when his salary does increase, if we don’t increase our expenses by one penny we might get to the point that, as is, we are truly living within our means.

So those are my thoughts! This subject easily lends itself to a discussion of topics like sacrifice, gratitude and worldly detachment as well, but I’ll save that for another post. Sorry for the long post — as you can tell, I’ve been thinking about this subject a lot lately. Anyone else have any thoughts?

UPDATE: A while back Meredith at Like Merchant Ships posted an excellent, interesting video by Elizabeth Warren that tackles the question: “If American families are working so hard, why are we still in debt?” The ensuing discussion in her combox, as well as the discussion to the follow-up post, are great as well.

« "Did they see something I don’t?"
Consumption leads to more consumption »