How would you know?

This picture haunts me: 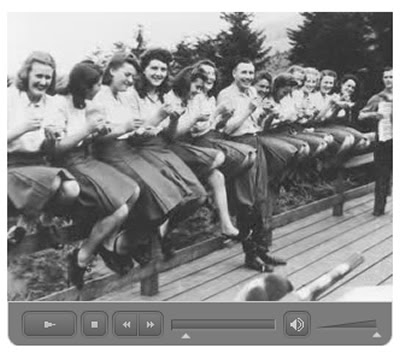 It’s just one of many pictures from a photo album full of pictures of the staff at Auschwitz relaxing and having a great time, sometimes with their children, during on-site retreats. I originally posted it as part of my post about “good people” and “bad people, ” but I’ve thought about it many times since then.

For me, this picture symbolizes all average folks who ever lived during times where particularly dark shades of evil gripped societies. It reminds me that though today we can see through the distance of history the thick pall of darkness that overshadowed the world in which these people lived, many of them could not see it themselves when they were in the midst of it. Like being in a city with air pollution, it’s easy to think that the air is clean and fresh when you’re standing in it; it is only when you get some distance and look back that you can see the dark cloud looming over where you were, and know that you were breathing soot all along.

I tend to be an easygoing, optimistic person who focuses more on my little corner of the world than the macro issues of the day. I tend to want to believe the best about people, and guard against buying into hyperbolic rhetoric that makes generalizations about the activities of certain groups of people being particularly heinous — so often, upon reasonable analysis, that type of claim pans out to be nothing more than a lame attempt to vilify people you disagree with.

If were a 31-year-old woman with three little kids in a busy house in Germany 1941, would I have fully understood the evil that surrounded me? As a woman living in 2008 I can see the horror that was going on there, but at the time there were some awfully sleek lies being told about the situation; it would have been really, really convenient to let myself be persuaded by the lies and just make the nasty little problem go away by telling myself that it wasn’t really a problem at all.

What if I were living in a time and place in India where it was common and accepted for wives to be burned alive on their husband’s funeral pyres? Or living in Rwanda when an entire race of people were murdered by their neighbors? Or a citizen of pagan Rome where newborn girls were frequently “discarded” with hardly a second thought? The people in those times and places had cheery, sunny days, went to birthday parties and get-togethers with friends with lots of yummy food, and had daily lives not terribly different than our own. There are no records in any of these cases that indicate that average people fully comprehended what was going on around them or were as outraged as they should have been at the atrocities in their midst.

It is sobering to realize that the odds are that I would not have been one of the very few people who saw it all for what it was.

Recently I was looking through some genealogy documents and noticed that a distant ancestor of mine owned a slave. My own flesh and blood, people probably not unlike me at all, participated in the horror of slavery. Can I be so sure that I would have seen the truth? Or, if I had lived alongside my ancestor, would I have included a human being on the list of possessions I owned? Even if I didn’t own a slave myself, would I have shooed the distasteful subject from my mind by surrounding myself with the comfort that all my friends seemed to think it was fine and, after all, it was perfectly legal? Evil’s most powerful tool is that it always works through lies; the lure to tell yourself that something bad is not really bad at all is a powerful temptation, and one that I’m not sure I could have resisted.

Sometimes I think about this, and wonder what advice I would pass along to my own descendants to make sure this never happens again; to help future generations guard against being blinded should they find themselves in the midst of a culture where something terrible is taking place.

But the question is: How would you know?

What litmus test could you offer that would apply to all places and all times as a way for a person to look around themselves with completely clear eyes, piercing through even the thickest fog of self-delusion and widespread cultural acceptance, and see that they are surrounded by grave evil? Is there any simple way for a person to immediately undergo an earth-rocking paradigm shift in which they look up and realize that the world around them is not what they thought it was?

One thing that stands out in all these examples is that the victims of the widespread evil were categorized as something less than human. In fact, though the exact level and degree of evil that took place may vary, one thing that unites all of these practices as worthy of a place in the Human Depravity Hall of Fame is not only that innocent people were killed or enslaved, but that their humanity was taken away by the societies around them. The Nazis classified their victims as sub-human, less worthy of life than the better members of the race; wives were burned with their husbands because they were seen as nothing more than property; in the 90’s in Rwanda the media fueled the genocide by assuring citizens over and over again that Tutsis were not fully human, referring to them as insects rather than people; the Romans accepted it as a matter of fact that baby girls inherently had fewer rights to live than baby boys; and in early America enslaved men, women and children were accepted by both government and society at large to be barely above livestock in their dignity and worth.

Every decade or so, take a look around the society in which you live, and ask yourself if there is any group of human beings who are seen as something less than human. A big tipoff is if dehumanizing words — terms other than “man, ” “woman, ” “child, ” “baby, ” or “person” — are used to describe any category of people.

And if you ever see that going on, you might be in the midst of something gravely evil.

UPDATE: A Part II to this post is here: Abortion and Holocaust comparisons