There is water here

As I mentioned, our church is doing 24 hours of Adoration for people who want to pray before the election. After my husband and I put the kids to bed yesterday I wanted nothing more to go collapse into bed myself, but instead I grabbed my purse and headed out into the night to go to our church. 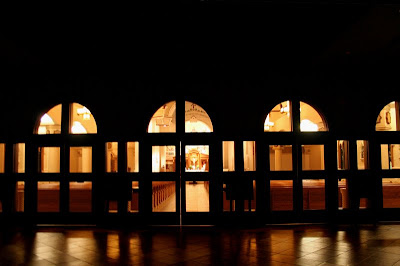 Adoration started after the daily Mass yesterday and will continue until the Mass this afternoon, right around the time the polls close. I happened to have my camera with me and took a few pictures from the narthex that I thought captured the feel of the evening nicely. 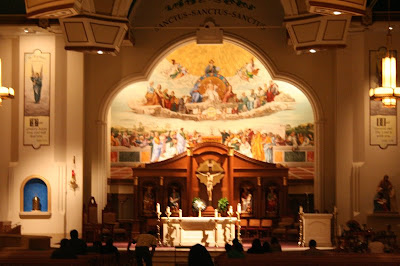 It was late on a weeknight, so I was surprised that there were about 40 other people there. As usual, the group was of all different ages and backgrounds. After I sat down three hispanic teenaged boys dressed in baggy clothes slid into the pew in front of me and knelt on the kneelers to pray. Behind me were some middle-aged gentlemen in business attire praying Rosaries.

Last night I didn’t feel any big emotions like I sometimes do. Maybe I was just too tired, but the wave of inspiration that sometimes hits me during Adoration wasn’t there. Nevertheless, something did happen that always happens: after praying in front of the Blessed Sacrament, my thoughts were ordered. There was a clarity there that wasn’t there before, that I did not come to on my own.

Probably the most interesting “religious experience” I’ve had since my conversion from lifelong atheism is Adoration. It doesn’t seem like something I’d be attracted to; though I found the doctrine of the Real Presence to be perfectly reasonable, I’ve never had a gut-level understanding that Christ is actually there, physically, in what appears to be bread. And when I walk into Adoration each time, I still look at the Blessed Sacrament in the monstrance and think something like, “How is this possible?”

I look around and marvel at how many people flock to this devotion, and what they sacrifice to do so. Though Adoration last night was in our beautiful sanctuary, many churches hold it in a small room in another part of the church so that Adoration can continue during Masses and other services. There is usually very little visual stimulation, just the exposed Sacrament in a nondescript room and the one red candle. Maybe some flowers or other candles, but that’s usually it. There is never any music. It is always completely silent. There is no “payoff” in terms of sensory experience.

Also, the exposed Sacrament can never be left alone, so each church has to come up with an elaborate sign-up system managed by at least one person and a backup to make sure that the room is never empty. In our area there are a few perpetual Adoration chapels, which means that the host is exposed 24 hours, seven days a week, including holidays.

Christmas night at 3:00 in the morning? Someone has to set their alarm, get out of bed, and be there.

The Fourth of July at 2:00 in the afternoon? Someone is there.

The stroke of midnight on New Year’s Eve? Someone is there.

I always feel a sting of tears when I see the schedule at an Adoration chapel, seeing the handwritten names in blocks like 2:00 in the morning on a Tuesday or 4:00 in the morning on a Saturday. It’s touching to see so many people sitting there in silence, just spending time with the Lord, often grabbing a Kleenex to dab their eyes. Adoration chapels always have lots of Kleenex.

When I think of the impact that Adoration has had on my own life, the intense pull I feel towards it, even when it’s late on a Monday night and I’d rather be in bed, and the way it gets people to behave in ways they normally wouldn’t, leaving their homes in all types of weather at all hours of the night to come sit in a still room in front of a monstrance, I am reminded of an oasis.

I might not be able to see Christ’s presence in the Host or even understand exactly how it works that he is there; yet I see the results of him being there. I see how my own thoughts are ordered and transformed by something external to myself, even when I can’t muster up much emotion about it or would rather be in bed; I see what people sacrifice to sit in the same room with him, and know humans well enough to know that you couldn’t get that number of people to do that if they hadn’t experienced something real; I see the Kleenex boxes, the vases of flowers people bring from their homes, the fact that almost every parish can get enough people to sign up to sit with the Blessed Sacrament so that they can host 24 hours of Adoration once a month (and many can have their own perpetual Adoration chapels), and it’s like coming across an oasis of lush, flowering land in the desert. I might not be able to see the running water in a form I’d expect, but I see it in the fat, green plants that could not get such nourishment from anything else. I might not understand exactly how it got there, but I see overwhelming evidence of its presence. Looking around at the flourishing life in an environment where such a scene is rare, I’d know that there is water here.