I officially love hosting 7 Quick Takes Friday — it’s a new weekend tradition that when I have a moment of free time for web surfing, I eagerly use it to read everyone’s posts. They’re all so much fun to read, and a great way to get to “know” other bloggers. So, from here on out, I’ll do 7 Quick Takes Friday every week unless otherwise announced.

Also, I got the idea the other day that I if I were to make this a really classy meme I’d create a proper logo to go with it (like Shannon’s lovely Works for Me Wednesday banner). So now I must have a logo. You cannot imagine the vast amounts of time and energy I’m going to waste over-analyzing this endeavor.

Southern hemisphere readers: does it bother you that the holidays are in the summer? Or is it what you’re used to?

I ask because I’ve lived most of my life in warm climates where white Christmases are unheard of and it’s not unusual to wear short sleeves to New Year’s Eve parties, and I’m still not used to it.

Doing Christmas cards this year has reminded me: one of the advantages of having the most secular wedding ever is that our conversion offered easy opportunities for conversations about the faith when shocked friends heard that we’d become orthodox Catholics.

I remember when our 2006 Christmas newsletter went out with the announcement that both of us were converting, you could tell how long the post office took to deliver mail to various parts of the country by how long it took the phone to ring with calls from bewildered friends. A day after the cards were mailed we got the “YOU DID WHAT?!” calls from friends in Texas; it took two days for friends in other parts of the South to call; three for friends in the Great Plains regions; and four days later our phone rang with friends on the East and West coasts asking if we’d lost our minds.

Now that it’s winter again, I want to rave about how much I LOVE my Twelve Months of Monastery Soups cookbook (which I originally discovered through the lovely blog Joyful Chaos). Benedictine monk Br. Victor-Antoine d’Avila-Latourrette shares the soup recipes that he uses to feed the brothers at his monastery and, as you might expect, they’re delicious, cheap, simple, and seasonal to both the weather and the liturgical year.

If you’re looking for a great gift idea: give a loved-one this book along with a pot of soup made from one of the recipes! 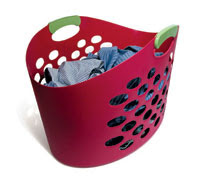 I’ve been trying to figure out why it is that I perpetually have a basket of clean laundry sitting in the family room, waiting to be put away. For a while I thought the problem was that I don’t have self-folding, self-storing clothes (I still think that’s a large part of it, actually). Then I thought it was because I still haven’t had time to do that epic closet re-org that I’ve been planning for, oh, two years, and it’s just too much to ask that I endure the overwhelming drudgery of cramming clothes into my overflowing, non-color-coded, non-Container-Store-grade closet racks.

Then I was reading Pioneer Woman‘s home and garden blog yesterday and I realized: the problem is that I don’t have a laundry room like the one in her guest house. After taking a moment to estimate if that thing is actually bigger than my whole kitchen or not, it became clear to me that I would not have any laundry problems if I had all that space and all those drawers and that amazing top-of-the-line washer/dryer unit; nay, I would not have any problems at all.

Anyway, as I sit here blogging with said basket of laundry sitting there not putting itself away in front of me, I find it refreshing to know what the problem really is.

Isn’t BooMama’s Christmas Tour of Homes the best idea ever? I really want to participate…the only problem is that my efforts at Christmas decorating are very, ahem, un-tour-worthy.

In my great desire to join in the fun I’ve been half tempted to do it anyway. I imagine posting a picture of me sitting on the couch, Photoshopping in a thought bubble above my head that shows me imagining some living room featured in the holiday issue of Martha Stewart Living. Maybe I could also use Photoshop to take out the decaying Halloween-era pumpkin you would see in the background of the picture of the Advent wreath. I could perhaps feature a shot of my children yet again mistaking our long hanging Advent calendar for a Tarzan rope. And I could end with a picture of our street with houses lit in gorgeous, elaborate light displays, pointing out the dark one in the middle as ours, a lone string of lights haphazardly draped kind of across the front window, making some sort of artistic statement like, “HEY WE HAVE THREE KIDS UNDER FIVE WITH ONE ON THE WAY THROW US A FREAKING BONE HERE PEOPLE.”

If BooMama is giving any kind of awards for this event, I’d be sure to win Most Real.

I had some other story I was going to tell, but after I wrote the first six earlier today I took a break to decorate our first-ever family Christmas tree with the kids. It was great, but I’m now so exhausted that I’m going to go track some tinsel upstairs and collapse into bed.

———
Below is a Mr. Linky list if you’d like to add a link to your own 7 Quick Takes post. (1) Make sure the link you submit is to the URL of your post and not your main blog URL. (2) Include a link back here.