Ugh. Honestly? It hasn’t been a great week. Other than some very bright spots like one dear friend cleaning my house and another bringing over some delicious homemade meals for me to keep in my freezer, it was one of those weeks where I felt like I just could not control the chaos. It seemed like every time I turned my back to put out one fire (say, one child getting into a fireant bed outside) another would erupt (say, another child breaking a borrowed rocking chair that I’d told him to stay off of 1, 000 times and then using the broken piece as a weapon to harass his sisters).

Logically, I knew that I have so very much to be thankful for and almost nothing to complain about in the grand scheme of things, but I couldn’t seem to pull myself out of my self-pitying rut and actually internalize that truth.

Suffice it to say, I’m glad the weekend is here. I look forward to going to confession, hanging out with my husband, and gearing up for a fresh start next week.

By the way…FIREANTS IN JANUARY? I really thought that these things hibernated or something during winter months. But when one of my children’s feet were covered in them yesterday I found out that, nay, that was too much to hope for. Even our scorpions have the decency to go away for the winter! It seems deeply unjust that we must endure bitterly cold weather and fireants.

A while back my husband had the idea to learn about various periods in history by reading biographies of the major players involved for each era — reading about individual people’s lives is always more palatable than broad, impersonal overviews that list places, dates and names. Along those lines, he’s been raving about the books Cicero and Augustus by Anthony Everitt. In both books, the author does a great job of telling the story of each historical figure while weaving in all sorts of details about the times and places in which they lived.

Anyone else have any historical biographies to recommend?

Since my dad’s sun pictures were such a hit (#6 here), I thought I’d share another email I got from him with an interesting story from the construction site where he works as an engineer. 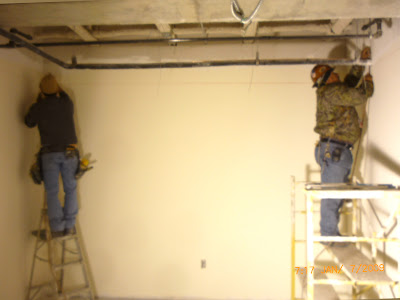 Most people use laser levels these days, but simple water levels work just as well. In the picture attached, the contractor needed to draw a level line around a room to mark the location of the ceiling grid. Juan took a clear plastic hose, filled it with water and held it up to the first measured elevation mark. The other guy took the other end of the hose and went to the other three corners of the room and made a mark where the water level was (which was, of course, identical to the level at Juan’s end). That is as accurate as any laser. After that they just drew a line from mark to mark.

That is how the workmen built the entire huge refinery in Salamanca, Mexico. [A refinery my grandfather oversaw in his many years working in Mexico and South America. – JF] Only they didn’t have clear hoses so they had to get the water right to the top of each end. When clear plastic hoses came out they thought they had moved into the space age. Using water level goes back at least 5, 000 years. When the Egyptians built the great pyramids they dug trenches along where the base line of the pyramids would be and filled the trenches with water. The biggest elevation error from corner to corner of the big pyramid is 3/4 of an inch.

Each morning this week I have found myself lying in bed, unable to bring myself to move from the warm cocoon of my covers, trying to prepare myself for the shock of the cold winter air in our drafty house, thinking, “Did I really complain about the heat? More than once?”

Mark my words, O internet: this shall be the year that I finally invent some kind of shock-prevention device. I really, really dislike getting a painful zap every time I touch something metal during the dry winter season (I feel like this hangup is related to the equally bizarre balloon issue, though I can’t prove it). Every year I announce that I’m going to invent some sort of device to put an end to these constant mini-electrocutions that plague me for months out of every year, perhaps some sort of metal ring/thimble thing that I can wear on my index finger that will absorb the shock.

“But wouldn’t that make you look weird?” you say?

Perhaps. But not as weird as when I recoil when anyone who has been walking on carpet tries to come near me for a handshake or a hug and I insist on touching them with my elbow first so as to diffuse any potential shock, or as when I hesitantly approach the metal handle on the frozen case at the grocery store as if it’s a nuclear bomb that I have been sent to disarm, or as when I’m caught off guard by a bad zap and barely catch myself from falling back into my old profanity-spewing ways and end up screaming something ridiculous like “OH SH-AAAAAA!”

I assure you, the lengths I will go to to avoid getting shocked make me look far more idiotic than wearing around a thimble contraption affixed to my finger.

Want to get to get things done like never before? Try writing a book.

I guarantee you, every time you sit down and see the blank screen with the blinking cursor, you will suddenly feel an urgent need to clean the baseboards, get those crumbs off the kitchen floor, de-lint the couch, Windex the skylight, clean the gutters, do your taxes and mop the garage. If you can swing a contract that puts even more pressure on you to write something good and thus brings out writer’s block in its worst form, you can count on having your to-do list cleared off in about a week.

————-
Below is a Mr. Linky list if you’d like to add a link to your own 7 Quick Takes post. (1) Make sure the link you submit is to the URL of your post and not your main blog URL. (2) Include a link back here.

« This is what a blessing looks like
Sweets and scales: trading one high for another »