A day at the Texas March for Life 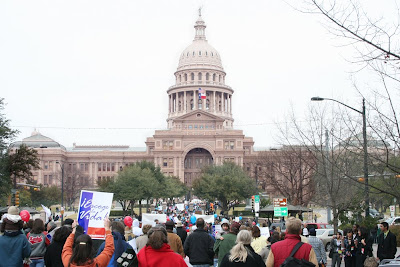 Friday night I told my husband I probably wasn’t going to go to the Texas March for Life with him the next day. My husband, who also used to be staunchly pro-choice, really wanted to go, but I had a million things to do and it was going to be cold. I said a little prayer asking if I should go (assuming that I’d skip it unless I felt strongly prompted otherwise), and went on about my business.

A couple hours later I accidentally stumbled across a picture of an infant killed by abortion at 27 weeks gestation, an age where babies are old enough to cry and gasp for breath and live outside of the womb (if you dare look, it’s on the bottom right of the sidebar here). It was a moment of the closet where I stuff inconvenient facts getting overloaded and bursting open, burying me in the dread of the cold realization that we live in a society where something terrible is happening. Infanticide is already legal under many circumstances (some currently-running ads for late-term abortions here), and may soon become legal under all circumstances. Sometimes I wonder how we sleep at night.

So I went to the march. Not that marching is a substitute for taking real action (I also reconfirmed an appointment to talk to someone about getting more involved at our local crisis pregnancy center), but I just couldn’t sit home. My heart felt so heavy about the issue that it was somehow cathartic to stand outside with numb fingers in the stinging cold wind just to add one more drop to the bucket of the gathered masses. 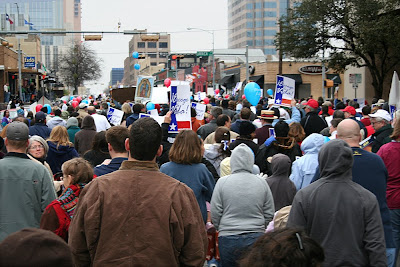 I felt bad for the organizers in advance because a cold front had blown through and the wind chill was in the low 30’s — unbearable by Texan standards — so I assumed it would be a sparse turnout. Boy, was I wrong. 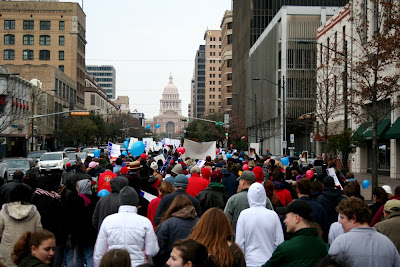 I’m terrible at estimating numbers, but there were thousands and thousands of people there. When we walked down Congress Avenue the crowd of wall-to-wall people stretched for more than eight blocks. (Below is a picture taken from the middle of the group, looking back on the crowd turning the corner.) 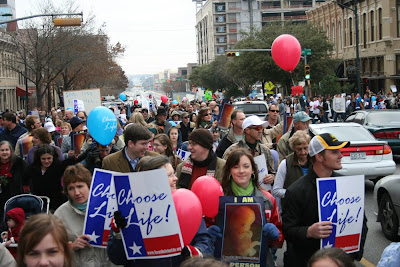 I’d never been to a march as a participant. I never really quite understood their purpose. Do marches really ever change the opinions of fellow citizens or legislatures? It seemed unlikely. But having been there yesterday, it was hit home to me on a gut level why marches are effective.

It’s a way to generate energy. So many bodies in one place, passionate about one cause, leaves a certain electricity in the air that makes you want to jump up and take action. 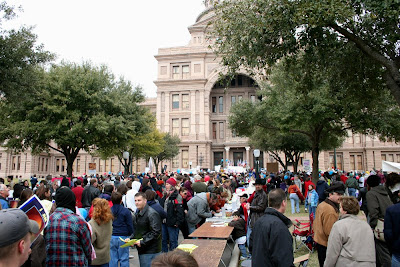 It sends a message. When I was pro-choice I didn’t know anyone who was pro-life. The pro-life movement to me was nothing more than a bunch of shadowy figures who were up to no good. I would have found it interesting to see so many thousands of my fellow citizens, maybe even some people I recognized, gathered for a cause that was so completely foreign to me — as perhaps it was for the countless passers-by who stopped to stare at all the marchers while fumbling for cameras and cell phones.

It’s a way to meet other likeminded people, to exchange ideas and information and get involved with organizations. This was one of my favorite parts of it. I met some great folks like Fr. Michael Buentello, who was there with the students from St. Thomas University in Houston. (I told him I just had to take his picture since a priest in a cowboy hat is just so “Texan Catholic.”) 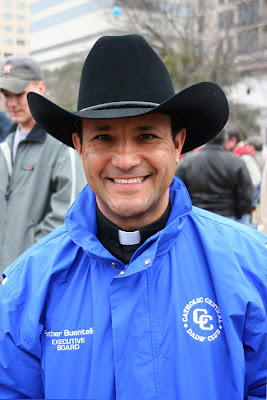 I got to chat with the founders of the New Wave Femmes, a powerful pro-life feminist organization that’s doing a lot of exciting stuff. You can see some pictures of what they’re up to here. (Baby New Wave Femme is in the sling there on the left.) 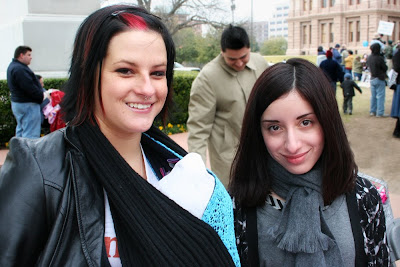 …And I met folks from the tons of other organizations that were there, including Silent No More, Texas Lutherans for Life, Texas Abortion Recovery Alliance, Concerned Women for America, and many of the various crisis pregnancy centers throughout the state.

I’m so glad I went. The pro-life stance doesn’t get a lot of coverage in the mainstream media and society at large, so it was inspiring and invigorating to see such a force assembled to fight for this cause. Walking amongst thousands and thousands of pro-life marchers sent a loud, visceral message to all involved. For the women who have been personally touched by the trauma of abortion, for anyone who’s ever lost sleep at night after seeing pictures or video of what really happens to those “fetuses, ” for anyone who sometimes looks around with deep concern about the increasing erosion of respect for human life and wondered, “What are we going to DO?”, one message was loud and clear: You are not alone.

« 7 Quick Takes Friday (vol. 18)
8 Ways to Talk to Your Pro-Choice Friends about the Pro-Life Position »