Sweets and scales: trading one high for another

This post is part of a series about re-thinking my relationship to food, which I call “The Saint Diet” to remind myself that the ultimate goal is deeper union with God. You can read all the posts on the subject here (scroll down to see them all). 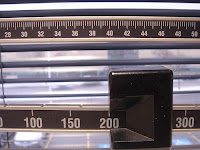 When I first realized that now was the time for me to make some radical changes in my relationship to food, it was exciting. God was clearly leading me down a brand new path, and I really felt like this might be it, a path to finally breaking unhealthy attachments to certain foods that had plagued me all of my life. It sounded like fun to see what he had in store! And then I remembered:

And it got a whole lot less fun. In fact, if it weren’t for the overwhelming confirmation I’d received multiple times in Adoration that now was the time (along with my obstetrician’s agreement that this would be a good thing to do), I would have done what I usually do and shoved it all to the backburner of my life until pregnancy and breastfeeding were over. Being pregnant left me unable to use any of the tools from my old bag of tricks: setting exciting weight loss goals, imagining getting into those size 10 jeans, creating colorful Excel graphs tracking pounds lost per week, following strict diets laid out in books, etc. With all of this off the table, I was lost. How do you break unhealthy eating habits without spreadsheets and scales and diet books?!

I was praying about this one afternoon, and a clear answer came to me:

When you are motivated to do it during pregnancy, you’ll be motivated for the right reasons.

When I “heard” that in prayer, something big clicked for me. In fact, I realized that the thinking that “I can’t work on food issues now because I’m pregnant” was indicative of where my mentality went wrong in the first place. If the drive behind previous efforts had truly been to achieve a healthy detachment from nutritionally void foods, to treat my body as a temple by nourishing it with quality, nutrient-rich foods and break my addictions to those foods full of processed sugar and white flour that harm me spiritually and physically, I would have been more motivated to do it during pregnancy since that would benefit my unborn baby as well; but that’s not what was really driving it.

I didn’t realize it until now, but in all my previous efforts I was looking to replace one worldly high for another: I would give up the “high” of the rush of pleasure from eating a bowl of cookies n’ cream ice cream; but I would replace it with the “high” of seeing a five-pound drop on the scale. The satisfaction I got from my efforts did not come from a deep, still place of joy at letting go of attachments that hindered my relationship with God, but from seeing how effectively I controlled the numbers on the scale to meet my goals on my timetable. I was like an alcoholic who quit drinking by smoking pot all the time. I was still seeking a high in something other than God.

This also explains why I have never been able to achieve long-term changes in this department: because once my weight would level off and I’d stop getting that high from seeing lower and lower numbers on the scale, that old high of a sugar cookie or huge plate of fettuccini alfredo would start to seem awfully appealing.

By prayerfully examining all of this while pregnant, learning how to get motivated to make these changes when there’s no high available to me, I have learned more about my issues with food in the past few weeks than I had in the past 17 years combined.

I’ve learned that I can’t make the scale an integral part of any long-term healthy eating strategy, because I will be too tempted to become addicted to it as a new high in relation to food issues.

I’ve learned that the spiritual part of getting my food issues under control is going to be the hardest part. To let go of seeking highs in any form — to learn to eschew the pleasurable rushes that come with control and short-term payoffs and seek only the slow-moving, deep-rooted peace that comes with when we begin to break our attachments to those things that come between our relationship with God — will require a level of spiritual maturity way beyond where I am now.

I’ve learned that to truly free oneself from an addiction to an unhealthy substance is a slow, sometimes painful, often boring process that involves just taking it one day — sometimes one hour — at a time.

I’ve learned that I have so much more to learn than I could have imagined, and that it’s silly for me to think that I have all the answers right now.

I’ve learned that I cannot do this without God’s help.

I want to add the important disclaimer that I am not suggesting that these lessons apply to everyone. In fact, one of the biggest things I’ve learned lately is just how much the process of detachment is a completely unique process for each individual — especially when it comes to food. There is truly no one-size-fits-all approach. I’m only offering my experiences in case it’s interesting at all to people struggling with similar issues.

(Also, I should add that I’ve been going over all this in detail with my doctor, and would recommend that anyone who’s pregnant do so as well.)

So this is foreign territory for me, tackling gluttonous, addictive, unhealthy eating habits without any of my usual substitute highs. On the surface level, it’s so much more mundane and, well, boring than when I’m getting on the scale every day and relishing the illusion that I’m totally in control. Yet without all the noise of my own controlling thoughts and immediate worldly payoffs, in the silence that’s left I am finally beginning to hear the still, small voice of God.