Why my life is better since becoming open to life

“You guys aren’t going to have any more after this one, right?” a few people have asked me privately since finding out that I’m pregnant again.

“We thought about having another, but the sleepless nights, the diapers, the pregnancy and birth — ugh! Aren’t you just so ready to be done with all that?” a neighbor asked at the playground last week.

“I do not envy you, ” a lady at the grocery store said solemnly as I passed by with a cart full of three kids under five and a hugely pregnant belly.

Whenever people say things like this, I have this odd reaction of simultaneously having no idea what they’re talking about and knowing exactly what they’re talking about. My life seems so completely normal to me that I can’t imagine it any other way; yet just a few years ago I would have been horrified by the idea of having so many kids so close together and would have thought it unthinkable not to use at least five different forms of contraception to make sure that no others came along any time soon.

Up until my mid-20’s I was firm in my belief that I never wanted to have kids. A combination of events made me reconsider the issue, and by the time we got married I was open to the idea of having some pre-set, small number of kids and had begun thinking about the precise timetables on which I would have them.

Even after my husband and I came to an intellectual agreement with Catholic thought on contraception and agreed to do Natural Family Planning, I viewed my future with trepidation. I’d see women at Mass or on blogs who were pregnant and had lots of kids, or I’d hear about a Catholic couple mis-estimating their fertile period and ending up with a surprise pregnancy, and I’d think, “Ugh. That is not the life I want!”

It is surprising, then, to find that even though our combination of high fertility and high ineptitude at NFP makes me well on the way to being “one of those women, ” my life is actually much better than it was before. It would have been inconceivable to me to imagine that constantly having my plans derailed by pregnancies and not even having any idea when I’d be done changing diapers would be an improvement over my fully controlled, well-ordered life, but it has been.

Lately I’ve been imagining what I would say to 2003 Jen if I could go back in time and give her a crystal ball to show her what her future would be like. I’ve been trying to imagine how I would talk her down from the balcony ledge after the crystal ball got to the “four kids in five years — and doing NFP!” part, how I could possibly convince her that this life is not only not a recipe for misery, but the true fulfillment of everything she thought she wanted.

I would love to tell you that I’d simply be able to explain that each child is such a joy and a blessing, but that would not have resonated with Old Jen; I might have agreed, but ultimately I would have said that those joys and blessing are just too much hard work. “I just don’t see how that kind of life could be anything but miserable for someone like me, ” I would have said.

Here is what I would say in response, based on five key things I didn’t understand then that I understand now through the wisdom of Christian teaching:

1. Each of us is called to a vocation, and we’ll never find peace until we find it and throw ourselves into it.

I’ve talked before about how understanding the concept of vocation revolutionized the way I saw my life. Until I understood this concept, that God has called me to the married life and that therefore my primary purpose on this earth is to be a wife and a mother, I kept thinking that there was something “out there” in the world that was going to bring be fulfillment and joy. I was stuck in the mindset that I needed to hurry up and get these challenging diaper and temper-tantrum years out of the way so that I could get back to living my “real” life, i.e. immersing myself in worldly pursuits in search of fulfillment.

What I could not have imagined is that when I surrendered to the idea that I am a wife and a mother first, that all my other hobbies and interests are important but secondary to that primary calling, it opened the floodgates for a waves of peace and grace to wash over me.

2. The world has nothing to offer us.

At the same time I began to understand my true vocation and attempt to fully embrace it, I also began to really get the Christian concept of, to paraphrase the great theologian Yaya, “WHAT YOU THINK IS OUT THERE AIN’T OUT THERE!” I realized that all of these excellent and important things I was going to do with my life after I was out of that difficult diaper phase were nothing more than all the things I’d been doing with my life before that had just left me restless and endlessly searching for the next big thing.

Slowly I began to realize that the only thing that was ever going to bring me lasting happiness was to discern what God’s will was for my life, and to abandon myself to it.

A product of secular society, I’d fallen into the common notion that the way to find true happiness is to focus on yourself more and other people less. It makes perfect sense, after all: doing pleasurable things for me is fun, sacrifice and hard work are not fun; ergo, the secret to happiness must be to live for myself as much as possible. Right?

How shocked I was to discover that I was wrong — dead wrong. Part of fully understanding the concept of vocation was understanding that a vocation is not to be thought of as “what you do” as much as it is “whom you serve.” It was nothing short of revolutionary to hear the concept that God has called every one of us to serve others, that living for yourself is not a valid option; that the key to deep fulfillment, to finding your very purpose in life, is as simple as finding out the specific way in which you’re called to serve. Do that, and you will find peace.

It sounded not only too simple to be true, but too difficult. As a spoiled only child the idea of living to serve sounded terrible. But once I actually took a leap of faith and tried it, I had no doubt that this was truth.

4. When you see something as temporary, you don’t optimize.

On a practical level, I realized something that should have been more obvious to me given my business background: when you see a situation as temporary, you don’t optimize.

Back when I saw pregnancy and birth and babies and diapers and the terrible two’s as just a brief phase of life, my mentality was to simply grit my teeth and get through it. I had the luxury of belaboring every inconvenience because I knew in the back of my mind that it would all soon pass.

But once I changed my view to see new life as an inherent part of marriage and made no more long-term plans about exactly when we’d be done having kids, I was forced to confront the difficulties of the baby/toddler years in a new way. Now I was motivated to really get creative and brainstorm with my husband about how we could overcome some of the difficulties of these years and make things run more smoothly. And, due to some combination of natural psychological mechanisms and the grace of God, all those things about having little ones that had seemed like such a big deal just weren’t that much of a big deal anymore once I saw it all as a lifestyle instead of a brief phase of life.

5. Life is better when you don’t try to control everything.

One of the most frightening things about this lifestyle change — taking the decision about whether or not to have more kids month by month, seeing openness to life as the default, not using contraception even though we’re bad at NFP — was the lack of control.

“But what about my plans?!” I’d think. “What about those lists of things I want to accomplish in the next five, ten, twenty years? How can I make progress on that if I don’t even know how many kids I’ll have and when I’ll have them?!”

As I’ve said before, after a few years of living this way I’ve come to the shocking conclusion that my plans weren’t actually that great. I’ve seen over and over again that just taking it day by day, discerning what God wants me to do here and now and not worrying about the long-term, is a far more fulfilling way to live.

What I was ultimately searching for with all those grand plans was a sense of accomplishment, a feeling of making a difference, a life of excitement, joy, peace and happiness. Little did I know that children would never get in the way of any of that, because those things are not the result of well-crafted goals spreadsheets and to-do lists; they are only found in God.

And then, of course, there’s this: 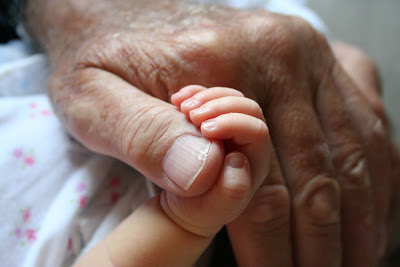 …the “result” of my first surprise pregnancy, snuggling with her grandfather. Children are only burdens when they’re theoretical. Once they’re here, you don’t need any further analysis to know that they are priceless gifts from God, that whatever you had to sacrifice for them to exist was a small price to pay.

« Recommended reading for Lent
Life as an eloquent sermon »