From Agnosticism to the Priesthood (Part I)

To give myself a little blogging break I decided to try doing a post where I interview some interesting person whose insights my readers might enjoy. I immediately thought of Br. James Brent, a young man with a fascinating story of losing his faith only to find it again and realize he was called to be a priest. I hope you’ll enjoy hearing his thoughts on faith, doubt, finding your vocation and the priesthood as much as I have! 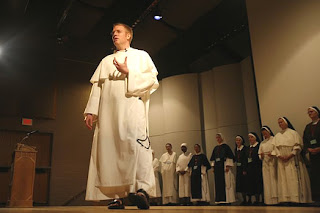 Q: Tell us a little bit about yourself.

My name is Br. James Dominic Brent, O.P. I am a Dominican Friar of the Eastern Province of the United States (the Province of St. Joseph). I was ordained a transitional Deacon in early January 2009. I live and study at the Dominican House of Studies in Washington, D.C., and I am assigned as a Deacon to St. Peter’s Catholic Church on Capitol Hill. I blog at dominicanfriars.org, the Dominican vocations blog.

Q: Have you always had a strong faith?

No. Although I was raised in a good Catholic family, and went through Catholic grade school and high school, and even believed what I was taught, when I was an undergrad I lost my faith. I went for four years without believing any of the Catholic faith at all. I think that is where a lot of young people are today. They find it hard to say that the Catholic faith is actually true. I’ve been there.

Q: What is your educational background?

I’m a weird case. Long before I joined the Dominicans, I finished a Bachelor’s degree in philosophy from a state school, then I finished a Master’s Degree in philosophy from a different state school. I then went to a Catholic school — Saint Louis University — where I completed all the requirements for a Doctorate in philosophy save the dissertation. I then joined the Dominicans. As a Dominican, I finished writing my doctoral dissertation in philosophy, and commenced theology and the other requirements such as canon law. At this point in history, Dominicans in my province tend to do an extra year (or two) of theology on top of the four required. I am making my way through theology now.

Q: How did you know you were called to be a priest?

In my freshmen year of high school, I began to have a sense that God was calling me to the priesthood. I asked a teacher for guidance, and he gave me one of those prayer cards to “Know Your Vocation.” Over the course of several days, I sat in my bedroom and said the prayer on the card. And then it began.

And those three words were extremely bad news to me. I was a young man, and now intensely interested in women and related matters. As high school went on, I began to party more and pray less. My faith dwindled.

When I got to college, I threw myself into two things: partying and philosophy. The mix was a deadly cocktail for what little faith I had left, and within months of being in college I lost my faith entirely. I stopped praying, stopped going to Mass, stopped going to confession, stopped reading Scripture, etc. All I knew how to do anymore was party and raise adolescent kinds of questions about the existence of the external world. The philosophy of Descartes, and his method of doubt, indeed the enlightenment project generally speaking, is a most excellent means of silencing one’s conscience in the name of “reason.” And silence my conscience I did. Silencing it brought me temporary relief from the haunting voice. Doing so in the name of “reason” tickled my ego to no end. Whenever I thought of faith at all, the only question I could ask was “how can faith possibly be reasonable? what rational justification is there for believing this stuff?” These questions continued for years.

After four years of partying, broken relationships, and rationalizing it all in the name of “reason, ” I became pretty conceptually and morally bankrupt. The prodigal son was waking up in the pigpen, and things were stinking up good. Certain books in philosophy triggered my wake up, and certain other books guided my way back to the Father’s house. I would be happy to talk about the sequence of books I read, and the philosophical points that cleared up a lot of my confusion. I think my story is testimony to the simultaneous greatness and wretchedness of philosophy. Philosophy can drag someone into hell, but it can also raise you up and set you down right in front of heaven’s door for you to knock.

The search led me one day, in my last year of undergrad, to go to confession to a priest for the first time since early high school. Let me tell you, when that priest made the sign of the cross over my head, and said the words “I absolve you from your sins in the name of the Father, and of the Son, and of the Holy Spirit, ” something happened in me that remains ineffable. Even the term “experience” is inadequate. I cannot describe it except as Jesus does: “if anyone believes in me, out of his heart shall flow rivers of living water” (Jn. 7:38).

The sacrament of penance was the turning point.

About a year later, when I went to graduate school in philosophy, I was a freshly converted (or reverted) Catholic, but I ended up in a department that was very atheistic. As divine providence arranged it, though, down the street from my office was a Parish run by Dominican Friars.

Next door to the Church was a convent full of Missionaries of Charity (Mother Teresa’s sisters) and their soup kitchen. The Dominican priory and the MC convent formed a little urban Catholic village. So here I was, standing in the middle between a graduate department full of atheistic philosophers who had fancy degrees from the fanciest schools and a little village with short Indian women running around looking like Mother Teresa and Friars looking very medieval in their white habits. In the middle of it all, the voice of my conscience came back. “Be a priest.”

Only this time, atheism and agnosticism, was no longer a possible response. I had been there, done that. I had tasted life with no conscience except one of my own making, and I wanted nothing more to do with it. Actually, I should say that I had tasted death, that is, life without faith. So, I had to face what still seemed at the time to be pretty much the worst news I could imagine: “Be a priest.” It took me about three more years to say yes, and three more after that to enter. In his providence, however, God used all those years to prepare for things down the road.

Thank you to Br. James for taking the time to answer my questions, and be sure to stop by the Dominican vocations blog at dominicanfriars.org!