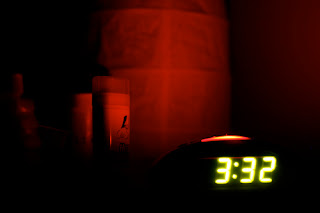 The comments to my last post reminded me of an interesting moment I had in my recent interview with Nona Aguilar for the National Catholic Register. She surprised me when she asked about something I’d never really tried to articulate before: what the biggest changes are in my daily life since my conversion. We ended up having a long discussion about the countless ways my day to day life is different now, but when she initially asked me the question I was caught off guard, and just blurted out the first thing that popped into my mind.

I was surprised by my own answer. I’d never thought much about it until the words left my mouth, but one thing that is really different about my life since becoming a Christian is that I no longer struggle with the chronic insomnia that plagued me for years before my conversion. I still have bouts of sleeplessness occasionally, especially if I’m under stress, but it’s nothing like what I experienced before.

Other than a period of a few years where I struggled with serious depression, I was generally happy as an atheist. I went through my days like anyone else, taking pleasure in good friends and an interesting job, dealing with frustrations as they came, overall feeling good about life.

And then nightfall would come.

Some nights were better, some were worse, but every night that I found myself lying in a dark room without distractions, I felt some combination of fear, loneliness, helplessness and discord. I quickly learned to avoid the situation altogether, alternately reading or watching TV until my eyes glazed over, or staying out drinking all hours with friends. But this behavior left me with an elephant-in-the-room situation where my odd sleep habits only reminded me that there was something I was trying to avoid.

On the nights that I didn’t have any distractions handy, the specific thoughts and feelings that would keep me awake varied: sometimes it was worry about specific problems in my life; sometimes it was a whirl of thoughts about everything that could go wrong; other times it was just a vague feeling of psychological discomfort; and, every now and then, I felt the cold terror of fully understanding the implications of my own mortality. Underneath it all, though, was that “something, ” the elephant in the room that I tried so hard to avoid. And when the lights went out, I could begin to hear it move and groan beside me.

The sensory deprivation of lying awake in bed at night let the silence shout at me of my utter insignificance in a vast, lifeless universe. Any worldly trappings that might have given me feelings of worth or importance were stripped away in the stillness of the night, reminding me that all life, including my life and the lives of everyone I loved, would one day flicker out, returning to the dead nothingness from which it came. It was then that I would understand that the only kind of legitimate hope that was available in the human experience was short-term hope; in the end, we would all perish.

Though I wouldn’t have thought of it this way at the time, it was an uncomfortable place to be. Insomnia was just one of the symptoms of the state of psychological distress that resulted from not understanding the truth about myself and the world, from not knowing my Creator. As I once described here, my soul was suffocating, cut off from its source of life like a limb deprived of bloodflow. And a soul gasping for breath is not — can never be — at rest.

“Come to me, all you who are weary and burdened, ” Jesus says in Chapter 11 of Matthew. “And I will give you rest.” Three years ago I was weary. Weary from lack of sleep, from almost three decades of carrying the burden of a desolate and incorrect worldview. I have now found the truth in Jesus Christ, and, in more ways than one, he has given me rest.