Status in the sight of God 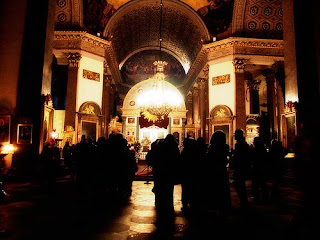 I went to confession tonight; well, I tried, anyway. It was one of those big pre-Easter sessions where there were hundreds of people and about a dozen priests. By the time I got in one of the lines there were at least 30 people in front of me, and after waiting a while I decided to go home and try again tomorrow.

But as I was waiting I looked around the building and noticed something interesting. Since it wasn’t a Mass and took place at the end of the day, most people were in their regular street clothes, which made the cultural and socio-economic differences between everyone much more striking than usual.

As people filed in and out of the building I saw pretty much every walk of life represented. I saw some of our parish’s new immigrant families, recently here from Africa and Mexico and the Philippines; I saw women with perfectly coiffed hair and two-carat diamond rings in the same lines with sunburned construction workers with callused hands; I saw young and fit people holding the heavy doors open for people with disabilities; I noticed uniforms of all types, from medical scrubs to fast food shirts to police uniforms. In one of the most amusing juxtapositions, I saw an older gentleman in a pressed white dress shirt and slacks standing next to a young hispanic teenager with baggy pants that included an airbrushed panorama of the life of Tupac down one leg.

Just as I was about to leave, I saw the door at the other end of the church open. A man walked in whom I’ve seen around a couple times before. He always has a kind smile though he looks quite disheveled and wears clothes that are in much need of repair; I think I heard someone say one time that he might be homeless.

As I saw him take a place in line next to woman in crisp business attire, I thought of how different things would seem if I ran into him outside the church. If I passed him on the street, I would certainly think of us as two very different people. I would definitely presume my circumstances to be much better than his. Would some hidden part of my mind slip in the thought that I am somehow better? I hope not; but the mind of a sinner does strange things sometimes. But tonight, here in the church, all of us in line for confession, the truth was clear. St. Francis put it best when he said:

Here is one of the best means to acquire humility; fix well in mind this maxim: One is as much as he is in the sight of God, and no more.

This quote rolled through my head all night. You are what you are in the eyes of God, and no more. Never is that truth more clear than in line for a confessional.

The group of us spanned the range of the socio-economic spectrum in our city, and if you saw us outside the church we would seem to be divided along lines like powerful and powerless, rich and poor, immigrant and native. By external indicators it would seem that the people with jewelry and expensive clothes were in a much better position than the folks in threadbare shirts and muddy workboots. But to look at us all in the warm glow of the church and remember why we were all there was to remember that our differences in terms of anything that really matters are very few, and that the differences that you can see by external appearances matter not at all. Every one of us would end up on our knees in humility before the Lord that night. We are all sinners; we have all fallen far short of the glory of God; we are all in desperate need of God’s mercy and forgiveness. And, most importantly, as each of us would be reminded at the end of our confessions, we are all forgiven, and we are all dearly loved.

« When You Find Joy in Easter, the Reversion’s Complete
Reminder »