The story of a beautiful Mass 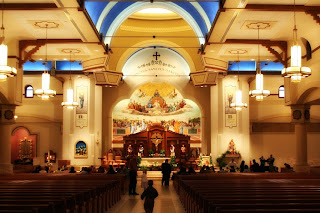 After all the austerity of Lent, I was really looking forward to experiencing the beauty of the Easter Mass this morning. I couldn’t wait to behold the visual feast of our breathtaking sanctuary filled with freshly cut white flowers, rich white and gold fabrics, and other decorations that symbolize a season of life and hope. I looked forward to settling into the comfort of our usual pew and listen to the choir proclaim joyful hymns that they’d undoubtedly perfected over weeks of practice.

But as we neared the church and policemen in orange vests waved us past the entrance, I realized that things weren’t going to go as planned. The huge parking lot was already at capacity, and we had to park a few blocks away. When we arrived at the church building, which has a capacity of almost 2, 000, we saw signs that said that it was already full. We were directed to go to the overflow seating in the parish meeting hall.

We walked into the parish hall to see that it too was almost at capacity; we headed for some of the few remaining seats at the very front. As we walked down the aisle between rows of yellow plastic chairs I moaned to myself that this was not where I wanted to celebrate Easter. It’s a nice enough room as church meeting halls go, but it has all the ambiance of a high school gymnasium.

After we settled into our seats, however, I looked up at the front of the room and my mood immediately changed: under the large screen that showed a live broadcast of the Mass from the main sanctuary was a solid oak box with a gold key sticking out of the lock, a red glass candle on each side. It was a tabernacle. He was here.

I was caught off guard by how comforted I was that the Blessed Sacrament was here in the room with us. My memory flashed to a time when I was a toddler when I felt lost and scared at a new pre-school and my dad unexpectedly showed up to come get me. In an instant, I went from feeling vulnerable and disoriented to basking in the reassuring presence of my father, knowing that I was safe and everything would be okay. It was the same feeling today.

The Mass began, and it was immediately clear that the sound system left something to be desired. Over the speakers, the choir sounded like they were singing into empty coffee cans, and they were often drowned out by the sounds of fussing children or chairs screeching across the floor. Visually it wasn’t much better. The screen showing the Mass was washed out by the bright lights, and there were no decorations other than some rich silk sheets under the tabernacle. My own children were restless and I had to spend a lot of energy keeping them quiet since there was no cry room available.

And yet, tears filled my eyes at the beauty of it all.

It was a powerful sight to see so many people there at this one service. In my more cynical days I might have dryly noted that many of these people obviously don’t come every Sunday; I might have assumed it was just a meaningless cultural tradition for most of them. But today I recalled the hundreds (maybe thousands) of people I saw in our church last week to receive the Sacrament of Penance so that they would be properly prepared to receive the Lord in the Eucharist today. Many people had to wait for hours, some not getting home until near midnight. It says a lot that while the church was overflowing with people at the celebration of Easter, it was also overflowing with people confessing their sins the week before.

When we saw our priest approach the altar on the screen to begin the consecration, almost everyone got down on their knees on the hard stone floor. It was a gripping scene to see everyone from children to elderly adults on their knees, in their finest clothes, on a painfully unforgiving floor.

The choir began singing I am the Bread of Life and I noticed that its melody was no longer a new sound for me; its comforting familiarity made me realize that I’m slowly leaving the “new convert” phase and entering a new season of faith. I walked up to the Eucharistic Minister, and when she placed the Body of Christ on my tongue I was moved to tears. I was in a gymnasium-like building with all sorts of abrasive noises echoing off the unadorned walls, yet Christ was there, and that was all that mattered to me. It was the first time I fully understood what J.R.R. Tolkien once said about the Mass in a letter to his son: the Eucharist is really all that matters; the externals are nice, but it is Christ who makes the Mass beautiful.

At the end of the service I dried my eyes as the choir began enthusiastically belting out Beethoven’s Ode to Joy. As we walked back down the aisle under the fluorescent lights, past the rows of cheap plastic chairs, the music sounding tinny over the speakers and overtired kids throughout the building yelling and crying over the din of metal chair legs scooting across the floor, I thought that it was one of the most beautiful Masses I’ve ever seen.

« A mini New Year
Want to watch something really interesting? »