When You Find Joy in Easter, the Reversion’s Complete

This is a guest post by Elizabeth Barr. Her site is Tink’s Mom, where she writes about pop culture from a mom’s perspective. (Be warned that she uses salty language at times.)

Everyone loves Christmas. It would be hard to argue that an ardent Christian loves Christmas any more than your average atheist. Our secular society has imbued it with so much magic and sourceless feelings of good will that it no longer belongs to Christians alone. (Of course, for those who don’t believe, “magic” truly is what they’re worshiping.) Secularists might not “buy” the reason for the season, but it’s hard to beat their enthusiasm.

Easter is a whole other matter.

Before I came back to the Catholic Church, I thought of Easter as a quaint relic observed by a generation that would soon be gone. I grew up in a Northeast Rust Belt city with a large Polish population and heard stories about how my grandmother and her family would take baskets of food – their Easter meal: fresh Polish sausage, rye bread, hardboiled eggs and butter sculpted into the shape of a lamb, and no, I’m not kidding – to church to be blessed. I, however, planned Christmas celebrations like an obsessed follower of Martha Stewart but only humored my other grandmother when she called to tell me what time to come for Easter dinner.

This year is the first year I am more eager about Easter than I was for Christmas. I think for anyone who is Catholic or becoming Catholic, it’s the real litmus test. A Christian who feels Easter is the most important holiday in the practice of Christianity truly gets it. 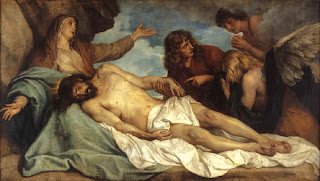 It’s not an easy holiday to love. I once thought it was morose. Even until recently, I wondered if all the references to nails and pierced sides and heads made bloody by crowns of thorns in the hymns we sing were, well, necessary. Why was everyone taking such delight in such gory descriptions?

Reading and studying and praying has done much to change my mind about Easter and the glory of Christ’s sacrifice, but my change of heart is largely due to my pastor, caught in an unguarded moment.

Easter 2008 was my first Easter since coming back to the Church. My reversion was only a few months old, and quite frankly I spent more time thinking about what friends and family members would think if they knew I was going to church than considering the actual teachings of my faith. Still, the call I felt to return to the Church was powerful, and I thank God He continued to gently pull me even through my confusion. Last year I could only focus duty and procedure of Holy Week (“OK, last chance for Confession before Easter is Wednesday, then Maundy Thursday’s Mass is at 7 p.m., then Good Friday…”) instead of the sorrow and joy of it.

There was a moment during the processional before Holy Thursday’s Mass where I was able to witness a glimpse of the enormity of Christ’s passion and resurrection, though. I was watching my pastor, a man who fills me with more than a little trepidation. He doesn’t sugar-coat the teachings of the Catechism and reminds us of Christ’s expectations for His followers in very direct language, in his homilies and his weekly letter in the bulletin. As he walked past the pew where I was standing, I could see the expression on his face.

I was only beginning to explore the reasons Christ had to die for our sins, a topic Steve G. discussed here just last week. The historical significance of the crucifixion and resurrection had me fascinated. My thoughts were of bemusement, and if I had actually articulated them, it would have sounded like: “If this is true, this is really big.” I was there out of curiosity, really, and a sense that the only way to test this pull I felt was to go to church. Basically, fake it until you make it.

Father Newman, on the other hand, was not there as a re-enactor of history. He wasn’t there to perform the Mass so that we the congregation could check it off our Holy Week to-do list. He was there to worship and give thanks to a man he knew, a man who was going to His death for us. For him, it was personal. I recognized the look on Father Newman’s face. It was that of someone about to lose his best friend.

I was instantly envious. I wanted to know what he knew.

It’s only now after another year full of attending Mass and prayer, especially the Sorrowful Mysteries of the Rosary, that I love Easter and have an idea of my role in Christ’s brutal death. I was particularly excited for Palm Sunday’s Mass. The drama of Jesus’ arrival in Jerusalem knowing what awaited him makes my heart beat a little faster. The hair on my arms stood up more than once as the Gospel of Mark was read. Everyone lingered a little longer after Mass on Sunday — with Lent over and Good Friday on the horizon, Passion Sunday is a little relief before the Triduum. Some tweenage girls were folding palms into the shape of a cross and gave one to my 3-year-old daughter.

I’m amazed at how far Christ has brought me in only a year. The thing about Christmas is, it’s a birth. Births happen all the time. As moms, most of us have even given birth ourselves. He might have been the Messiah, but Jesus was born a baby. It’s not a stretch of our human capacity to understand Christmas.

Jesus’ death, however, can take a lifetime to understand. For someone who was sure she had all the answers, it’s an unfamiliar place to be, but not fully understanding Easter has brought me more joy than celebrating pretend Christmas.

Elizabeth Barr lives in Greenville, SC. She’s a parishioner at St. Mary’s, where the Rev. Jay Scott Newman is pastor and Father Dwight Longenecker is an assisting priest. Can you imagine such luck for someone coming back to the Catholic Church?