Letter to a graduate

Earlier this month I was asked to be part of a project in which a bunch of friends and family wrote “life wisdom” letters to a high school senior, for him to open as a surprise on his graduation day. With all the chaos around here I was only able to dash off a short note in time for the deadline, but I’ve been thinking about the subject ever since then. Here is what I wanted to write:

The other day I received an email forward that offered the following thought:

Life’s journey is not to arrive at the grave safely in a well preserved body, but rather to skid in sideways, totally worn out, shouting, “Man, what a ride!”

Though I don’t know if I’d seen this exact quote when I graduated from high school, it’s a good summary of what I wanted for the rest of my life when I walked across the podium in my cap and gown that day. The only thing I feared was mediocrity; I was determined that I would seek a life of excitement and adventure, living each day to the fullest. 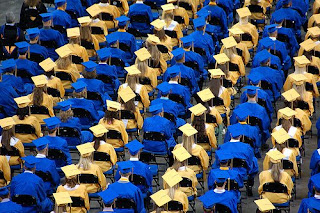 I worked hard in college, got good grades, and managed to land an interesting job working with cutting-edge technology. By the time I was 25 I’d quadrupled my salary, lived in a loft downtown, drove a Jaguar XJ8 and traveled constantly. I had a great boyfriend (now my husband), and together we became known for throwing parties that drew big crowds.

I thought I was living proof that money can buy happiness. All these luxuries did make me happy…in a sense.

I’ve come to believe in recent years that the English language is missing a word. Our term “happy” broadly covers two sensations that are vastly different from one another: there’s a kind of surface-level, fleeting happiness that comes from the highs of worldly pleasures and amusements; and then there’s the deep, lasting happiness that comes from inner peace. Career and travel and parties brought me the former; my soul was craving the latter.

As long as I was chasing after that high-happiness that the world gave me, there was always “one more thing” that I needed in order to feel like I was truly living life to the fullest. Like any other high, that kind of hollow sensation always faded away, leaving me in need of another fix. I’d been to Europe, but I’d never been to Asia; the Jag was comfortable, but those sporty little Audis handled a lot better; I was the manager of a small department, but I’d be more fulfilled if I were a director; and so on. The carrot stick of that “one last thing” that I needed for perfect happiness endlessly dangled in front of my face, leaving me restless.

In what I thought was an unrelated subject, I began to try to figure out whether or not God exists. I’d been an atheist all my life, even as a child, but I’d begun to notice logical cracks in the godless, soulless worldview and suspected that there might be more to life than just the material world at hand. After months of intense research and reading, I became convinced that God does exist and that he did become man in the form of Jesus Christ, so I became a Christian. Initially it was just an intellectual endeavor for me; I believed that these claims were true so I signed on the dotted line, so to speak.

But then, unexpectedly, things began to change.

Through prayer and the sacraments I came to really know God. He became Someone I knew, not just Something I read about in books. The closer I got to him, the more I was willing to give him control over my life. And the more control I gave him over my life, the better things got, even as my external circumstances became less spectacular. Setting my own plans aside to follow God’s will ended up with me living in circumstances that I once would have considered the height of banality: a modest house in the ‘burbs, a bunch of kids, clipping coupons and living on a tight budget, even driving a minivan with a broken door handle and more than 100, 000 miles on it. And yet, in the midst of that, I found not only that peace-happiness I’d always been craving, but more excitement than I’d ever known.

In the past few years I’ve experienced the healthy, heart-stretching pain of loving people I didn’t think I could love; the adventure of trying things I never thought I could try; the agonizing thrill of letting go of fears I never could have let go of on my own; the scary freedom of seeking God’s approval instead of the world’s approval; and the anticipation of not knowing what’s coming next, but knowing it’ll be something big.

A skeptic would say that if my life is more exciting now, it is surely only because lack of planning on my part means it’s more haphazard, and if I’ve found lasting happiness it’s only because I’ve told myself a nice story about God’s existence. I could not prove that this argument is false. The direct action of God’s hand guiding a life is not something you can know about from hearing someone else’s account; it’s something you must experience for yourself to understand. All I can say is that I have no interest in fooling myself — I have too much responsibility as a mother to be messing around with ceding control of my life to an Entity who isn’t there — and after carefully analyzing my experiences over the past few years as objectively as possible, I am certain that there has been a distinct Presence from outside the material world leading me down a very specific path. I am certain that when I asked God to guide my life, he did. 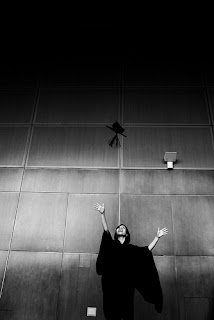 So my advice to you, on this most important of days, would be this:

If you’re ready to take the world by storm, to live each day to the fullest, and to experience a life of deeper happiness and more excitement than you’ve ever dreamed of, the best thing you could do would be to stop what you’re doing right now and say a sincere prayer to ask God to take control of your life. If you have doubts about God’s existence, start by saying a prayer to ask how you can know him. Say this prayer every day until you feel called to pray for something different. You may not “hear” an answer immediately; not because God is slow to respond, but because it takes us time to learn how to listen. But keep at it. Seek, and you shall find.

If you do this, today will truly be the first day of the rest of your life. Surrendering your life to God will not only lead you to that deep happiness that people spend their whole lives searching for, but it will be the beginning of a great adventure. No matter what university you attend, what degrees you earn, what career you choose — if you have fearlessly let God take control of your life, I guarantee that in the end you will be one of the few people who actually does go skidding sideways across the finish line, shouting, “Man, what a ride!”

« An interview about faith and motherhood
7 Quick Takes tomorrow! »