Science and religion – where’s the conflict? 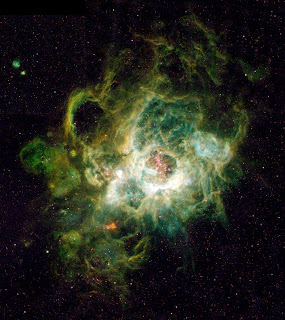 I’ve been on a physics kick lately, and my current nighttime reading is Brian Greene’s The Elegant Universe. I’ve been eager to read up on string theory for a long time, and am really enjoying the book. One thing I’m reminded of as I go through it, however, is just how much science and religion overlap.

The way I think of it, they’re two sides of the same coin. Both tackle different questions about the human experience: science defines that which is measurable and seeks to understand how the world and universe around us work, as seen from our limited perspective as animals with five senses who inhabit a little planet in a big spiral galaxy; religion attempts to explain why it’s all here in the first place, and to make sense of the part of human experience that is not measurable — love, beauty, hate, evil, etc.

The more I get into both religion and science the more I see how very complementary they are — one inspires me to learn more about the other.

For example, as I was reading Greene’s chapter where he talks about how string theory may perhaps be the unifying “theory of everything” that explains all the particles and forces in the universe, I felt so inspired. I’d read about this before, but now that I believed in God it was all the more powerful to learn about it. The fact that this theory of vibrating strings may lay the foundation of our understanding of the universe from which everything else flows, to me, spoke of the sleekness and beauty of a designed universe.

So I was caught off guard when Greene explained that many others have a totally different take on the implications of string theory. He writes:

Many find it fatuous and downright repugnant to claim that the wonders of life and the universe are mere reflections of microscopic particles engaged in a pointless dance fully choreographed by the laws of physics. Is it really the case that feelings of joy, sorrow, or boredom are nothing but chemical reactions in the brain — reactions between molecules and atoms that, even more microscopically, are reactions between some of the fundamental particles, which are really just vibrating strings?

He goes on to quote Nobel laureate Steven Weinberg, who writes of people who are “appalled by what they feel to be the bleakness of modern science”:

I would not try to answer these critics with a pep talk about the beauties of modern science. The reductionist worldview is chilling and impersonal. It has to be accepted as it is, not because we like it, but because that is the way the world works.

I don’t get it. Why does string theory suddenly make everything so bleak? Before we came up with strings we knew that all the wonders of the universe and human experience were caused by the interactions of electrons, protons and neutrons. Why are strings more repugnant than atoms? There is no denying that tiny physical particles are involved in everything from sensations of happiness to supernovae. It seems to me that whether science reveals their fundamental building blocks to be atoms or quarks or strings or this, it’s irrelevant to the questions of religion.

Greene writes that “a staunch reductionist would claim that…in principle absolutely everything, from the big bang to daydreams, can be described in terms of underlying microscopic physical processes involving the fundamental constituents of matter. If you understand everything about the ingredients, the reductionist argues, you understand everything.” I think the problem lies in that last sentence. That does seem to be the prevailing attitude in science today — yet it just doesn’t sound right.

Even if you could have a perfect understanding of the ingredients, you’re a long way away from understanding everything. You might be close to understanding how it all works, but the lines between science and religion start to get blurred when your quest to understand takes you to those final questions, “Why is this here at all? For that matter, why is anything in the universe here? Why is there something instead of nothing?” It’s when we ponder those questions that we can set our telescopes and microscopes and calculators aside, and seek answers in the disciplines that speak to those and all the other mysterious questions that science could never answer, and, in this life, we could never fully understand.

Here is a part II to this post in which I shared an interesting experience I had while reading this book.