Taking down the fences: fear and discernment 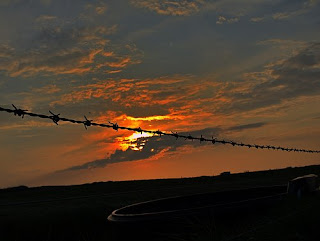 Since the very beginning of my conversion, I’ve had a great interest in learning how to discern what God’s will is for my life (you can see all the posts that touch on that topic here). I’ve always liked the idea of radical obedience to God’s will, but when I’ve tried to put it into practice it always feel like it’s hard to tell whether I’m living according to God’s will or Jen’s fantasies about what she wishes God’s will would be.

I recently noticed that things have been a lot better lately. My husband and I both feel like we’ve seen big improvements in the past few months in terms of not only being able to more clearly “hear” God’s voice in our lives but also actually being obedient to what he tells us to do.

“What changed?” I was asking myself yesterday. After a few moments, I immediately knew the answer:

Fear. I did a mental rewind on this year and tried to pinpoint when it seemed like my ability to discern and live God’s will saw such a marked increase, and it was exactly when I started the “day without fear” project.

When I think of my prayer life before I started working on fear, I imagine myself standing at the edge of a forest with hundreds of different paths in front of me, yet most of them are cordoned off with barbed wire fences, put there by my fears. God might start leading me a certain direction, but I’d quickly run into the razor-sharp barbs of “that’s too hard!” or “I’d have to sacrifice too much!” or “c’mon, people just don’t do that!” I’d end up asking God to show me which path I should go down — choosing only from the ones that weren’t blocked off by fear.

But when I started letting go of fear one day at a time — starting with the littlest things like not worrying about the next day when I’m up with the baby all night or trusting that God will work it out if I get caught in an unexpected traffic jam — one by one, those fences started to come down. Suddenly there were a whole lot more options in front of me; when I would think that God might be leading me down a path that seemed crazy at first glance, I would be willing to continue to pray and carefully discern whether this was something I was supposed to do, rather than outright rejecting it out of fear as I would have before.

I still have a long way to go, and there are still plenty of fences I’m too scared to take down. But I’ve found that one of the best ways to learn discernment is to first learn to let go of fear.