A lesson in prayer 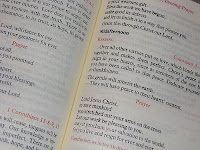 When I first started praying — when I was 28, after a life of atheism — I unintentionally fell into thinking of God as a glorified wish-granting genie. My prayers were all petitions for what I wanted God to give me or my family and friends. As I got to know more about prayer and the nature of God, I began to spend a little more time thanking God for the stuff he gave me and my family and friends that I’d requested. Eventually I even moved into throwing out some open-ended requests for guidance, asking the Lord to show me his will for my life. And for a long time, that was pretty much it.

But something slowly began to change when I started praying the Liturgy of the Hours. It’s something I’ve noticed in the back of my mind for a long time, but could never articulate until I read your fascinating comments to my questions about the Psalms last week. (If you haven’t read those responses, you really should — great stuff). After reading that comment thread, something finally clicked:

One of the first things that jumped out at me as different when I started praying the Liturgy of the Hours was that I found myself saying “we” and “our” more often than “I” and “mine.” Other than when I prayed the Our Father at Mass, I wasn’t used to saying those words in prayer. I didn’t think through the implications at the time, other than to simply notice that it put me in a more humble mindset to end the day with an evening prayer like, “Almighty God, we give you give you thanks for bringing us safely to this evening hour…”

Then, around the time our new baby was born, I fell out of the habit of praying the Liturgy of the Hours. In fact, I fell out of having any dedicated prayer time at all. I simply tried to “pray without ceasing, ” turning my thoughts toward God as I went through my days. That is definitely a great thing to do, and I don’t ever intend to stop doing that, but what I found was that when that was the only form of prayer I undertook each day, I drifted back into making prayer revolve around me-me-me! Prayers like “Lord, give me patience as I tell the kids not to jump on the bed for the SIXTH TIME…” are great, but when that’s what 90% of my prayers sound like I tend to fall into thinking that God is part of my plan rather than remembering that I am part of God’s plan.

It all clicked for me last Thursday, when Lauds (morning prayer) began with Psalm 143. I read:

The enemy pursues my soul;
he has crushed my life to the ground;
he has made me dwell in darkness
like the dead, long forgotten.
Therefore my spirit fails;
my heart is numb within me.

I was having a great day and feeling strong in my faith, and thought that I definitely would have skipped this Psalm if I’d come across it as part of personal prayer. “This is totally not speaking to me!” I thought, half tempted to gloss over it and move on to the next one in hopes that it would be more relevant to my life. And then I remembered something that a commenter named Jasmine said in that post about the Psalms, which was echoed by many of you throughout the comment thread:

Remember that the ‘prayer of the Church’ [the Liturgy of the Hours] is for the whole Church. You will not identify with every psalm at every moment, so when you pray them think of all of the people in the world praying with you who DO identify with the psalm. Pray for them and on their behalf.

It all finally clicked. For the first time, I think I really understood the power of the Liturgy of the Hours as the universal prayer of the Church. My mind immediately flashed to everyone all over the world who opened their day with the exact same prayers as I did that morning — my priest, all the priests and nuns in the world, all bishops, the Pope, my long-lost cousin the monk, all my friends and the other laypeople throughout the world who pray the Hours — and the wall that I’d unintentionally put up around myself was smashed.

As I had yawned through the psalmist’s cry of anguish, someone out there could barely utter those same words through trembling lips and tear-stung eyes. I thought of all the people praying the Hours in that state, and for the first time was conscious of our deep connectedness as we prayed in unison as part of the mystical Body of Christ. I began offering my prayers for them, which then led me to expand my prayers to anyone else in the world who was in pain at that moment. As my heart swelled to think of the great drama playing out all over the world that morning of which I was only a small part, I thought back to my words at the beginning of the office — “But this Psalm doesn’t have anything to do with me!” — and realized that I had learned something critically important about prayer: It’s not all about me.