The chaos of being on vacation with four kids under five in a non-childproof house is using up all my mental energy, so here’s one from the archives. It was originally published on October 9, 2007, and is still something I think about a lot today. I’ll be interested to hear your thoughts. 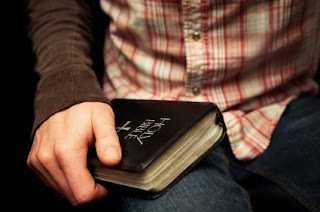 One subject that’s related to our recent discussion about women covering their heads at church is the concept of outward signs of piety. In the comments here as well as other conversations I’ve heard on the topic, people sometimes mention that they don’t do something that is an outward sign of their beliefs (e.g. praying in public, wearing chapel veils, carrying a Bible, etc.) because they’re afraid they’ll seem self-righteous. I’ve also heard people mention with a note of shame that it pleases them when others comment on their pious dress or actions.

But is that definitely a bad thing?

It love it when something I do or say or wear indicates to a stranger that I’m a Christian and they comment on it. I hope I’m not off base here, but I’ve been assuming that the pleasure I take in these kinds of events isn’t a bad thing. I just think it’s exciting when I’m identified as being serious — or, at least attempting to be serious — about my religion.

Once again, a lot of my feelings here are influenced by my atheist background. When I was an atheist I told myself that nobody even believed this Christianity stuff anymore. I saw what I wanted to see to tell myself that all these so-called “Christians” didn’t even take their own religion seriously and just went to church for social reasons. But on the rare occasions that I saw someone who went against the grain and did something unusual as an outward sign of their faith, it gave me pause.

One time I saw a few nuns in an airport. I noticed a priest at a local restaurant one afternoon. Once on a plane there was a little old lady in the aisle across from me who read her Bible out loud (quietly) through the whole trip, and when we landed safely she looked up and profusely thanked Jesus. One day I walked into a deli to see a Rabbi and a couple of orthodox Jewish men at a table. There was a family at a diner one time who all held hands bowed their heads in a long prayer before eating.

I smiled on all these occasions. These religious in their habits, the lady with the Bible, the Jewish men, the family in prayer…their actions and appearances left me without my old line that nobody took religion seriously anymore. They might have plenty of faults, I’d think, they might be wrong, but I can’t say they don’t take it seriously. Their religion is such a big part of their lives that they’re willing to look different than everyone else, to risk stares and perhaps even ridicule, to live their faith publicly.

I not only felt respect for people like this, but I even felt a bit of warmth upon seeing them. I didn’t know where that feeling came from at the time, but looking back I think I know what it was: hope. Though I had never consciously entertained the notion that God might exist, I think that something within me felt joy at the recognition that these people obviously believed the whole God thing, and they didn’t look totally insane. These people were beacons of hope to something hidden deep, deep down inside me…the part of me that wanted them to be right.

Another reason that I’ve come to love being recognized as a Catholic Christian is that I’ve discovered that many people who have fallen away from faith want to talk about it. Comments about my closely-spaced children frequently lead to the subject that I’m a convert to Catholicism, and I’ve been amazed at how many times people have opened up to me about their personal crises with faith and asked me questions about what led me to Christianity — so much so that I keep joking with my husband that I’m going to get an ASK ME ABOUT MY CONVERSION FROM ATHEISM TO CATHOLICISM t-shirt. I actually wish there were more ways that I could outwardly display my faith to others so that anyone who would like to talk about it would recognize me as someone who’d be more than happy to chat with them. Sure, some people might think that I fancy myself to be some kind of holy roller, but if even one person found it inspiring or helpful it would be worth the tradeoff.

And, finally, I think that displaying my faith through attire or actions helps keep me in line. I’m thinking about hanging a rosary from my rear-view mirror, and having it there will definitely incentivize me to keep any road rage in check. Sometimes it’s nice to have a physical reminder that, as a Christian, I’m supposed to be representing Christ to the world.

I want to end this with a BIG disclaimer that I’m not saying that outward displays of faith mean that you’re actually holy or devout or pious or whatever (definitely not in my case!), or that if you don’t do anything to “show” your faith then you’re not serious about it. Nothing could be further from the truth.

I just wanted to throw this out there, especially to share my memories from back before I was a Christian, to say that I think that sometimes the concept of outwardly showing your faith gets a bad rap. Sure, it’s not a good thing if it’s motivated by pride or feeling superior to others. But I’ve noticed that, even when those motivations are ruled out, when discerning these types of matters people usually err on the side of not doing anything to publicly display their faith unless there’s some extraordinary reason to do so. The reason usually cited is fear of appearing self-righteous. Perhaps that is a concern, but I think it should also be weighed with the benefits of having others recognize you as someone who is at least attempting to take his or her faith seriously. To some you may seem pretentious; but to others you may be a ray of hope.