The seven words that give hope in the face of suffering 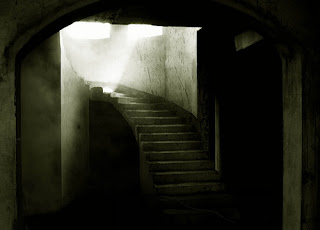 Yesterday I was catching up on some blog reading and came across a blogger who did a post in remembrance of Holodomor, the great Ukrainian famine of 1932-33. For her post she translated the writings of some Ukrainian bloggers who wrote on the topic.

I wasn’t prepared for what I read. First of all, I am ashamed to admit that I was not that familiar with Holodomor. I had some awareness that many people in that area of the world died of hunger around that time, but that was the extent of my knowledge. But to find out the details, and to read those stories recounted by the bloggers whose grandparents lived through it, was just shattering. I’ll save you from an excerpt containing any of the more disturbing details and just offer this thought from one Ukrainian:

Old men and women spoke calmly about [raskulachivaniye – persecution of kulaks, collectivization], about the war, about DneproGES [Dnipro Hydroelectric Station] construction. No big deal, they were saying, it was tough, but it was a long time ago, and tears and grief tend to get erased from memory.

But as soon as you asked them a question about the Holodomor of 1932-33, these ancient men and women, who had seen lots of horrors, began to cry. Just cry. Some refused to talk – they had no energy to tell anything about it.

Of course Holodomor is not by any means the only large-scale tragedy to have happened to civilization — many more occurred even in the same century. Maybe it was that I never heard much about this in history classes, that we live in a world where even a tragedy of that scale could get lost in the mix of all the other terrible things that happened in those years; maybe it was the personal tales that put a “face” to the suffering; maybe it was that quite a few of the stories involved parents mistreating their own children; or maybe it was the fact that the entire situation, this mass starvation of millions of people, was caused and perpetuated by a government. It was probably all of the above. But, whatever it was that jolted me out of my detached mode of reading words about historical events and into the mode of a mother, a daughter, a fellow human being whose heart ached terribly for the men, women, children and babies who faced such unimaginable suffering and evil…it left me in a sort of spiritual paralysis.

Since becoming a Christian I’ve read and prayed and thought a lot about suffering, so I tried to analyze the situation based on the knowledge I’ve gained from reading the great Christian scholars and their works on the subject. But it wasn’t working. Just as I would begin to recall what C.S. Lewis or St. Augustine had to say about it, the thought of all the children who lived during Holodomor would come to mind, which would remind me that the Holocaust happened just shortly after that, which would remind me of all the stories my dad told about his friends who died terrible deaths in Vietnam, which would remind me of the current AIDS crisis in Africa…it was too much to think about. I thought about praying for the people involved but couldn’t even really do that because bringing any of these topics to mind just overwhelmed me with sorrow. I have little kids to take care of, and thinking about this was making me feel so down that it was impacting my ability to function, so I decided to just forget about it for now.

I tried to, anyway. It didn’t really work. Shutting all of these horrors out of my mind, not even spending much time praying for the people involved because that would mean thinking about it, did not feel like the right response, especially as a Christian.

Last night, as I knelt beside my bed to pray, I asked God to show me what to do. I knew that putting my head in the sand was not the right response, but I just couldn’t think clearly enough to know how to even begin to pray about suffering at this kind of catastrophic level, to understand how we as Christians are supposed to have even a shred of hope in the face of such tremendous evil.

This angst was still with me in the back of my mind when I went to pick my husband’s car up from the mechanic’s shop this afternoon. As soon as I turned the key in the ignition, I heard a voice say:

You must keep your eyes on the risen Christ at all times, or life will seem to be just a bitter joke.

It was one of my great heroes, Fr. Benedict Groeschel, introducing one of the Glorious Mysteries over the sound of a mournful yet hopeful violin piece. Unbeknownst to me, my husband must have borrowed my favorite rosary CD and left it in his car. I’ve listened to it, this introduction to the Glorious Mysteries in particular, so many times; yet it was like hearing it for the first time today. I started it from the beginning, and wiped tears from my eyes as I heard:

No rosary, no meditation on the life of Christ, is complete, or even makes sense, without pausing to think about and to pray about the events that took place beginning early Easter morning. The glorious Resurrection and the absolute triumph of Christ makes all of these events comprehensible, livable, for those who are still walking in the valley of tears.

You must keep your eyes on the risen Christ at all times, or life will seem to be just a bitter joke.

In the Glorious Mysteries we have not only Christ’s victories in this world, but the coming of the Holy Spirit, and the promise of eternal life. The Christian life only makes sense when we keep before us the glorious and eternal mystery that we celebrate at the end of the rosary.

I came to believe not too long ago that Jesus probably did rise from the dead like the Christians claim; and now that I have lived as a Christian myself, and seen God’s work in my own life as well as the lives of those around me, I am certain it is true. And that’s really all that matters. In the face of suffering in our fallen world, it’s not even necessary to do too much complicated theological analysis, because the only important question is this: Did the crucified Christ rise from the dead? Did the Resurrection happen? Because, if it did, then we know that there is eternal life, and that all the terrible events of this finite world will be but a blip in comparison to an eternity with God. We know that the epic saga of human history has a happy ending.

I realize I’m talking about concepts here that most Christians probably mastered sometime around the third grade. But I thought I’d share anyway since this disarmingly simple truth has shown me how I can think about, pray about, and hopefully one day actively help those who experience great suffering, without succumbing to despair in the process:

I don’t need to analyze it or even fully understand all of the how’s and why’s behind all that is wrong with the world. I don’t need to sift through all the words in the weighty tomes about religion and human suffering. I need to remember only those seven words that mark the turning point of all of history and shine a floodlight of hope into the darkness of our fallen world: “He is not here; he has risen.”