When Less is More: Finding Inspiration in Severe Disability

I recently became familiar with the story of Jason and Angie Berger, whose daughter Sunni (pronounced “Sunny”) was born with a disorder causing her to be severely disabled. I was so touched by their story that I asked if I could do an interview with them. I hope that you find their answers as inspiring and thought-provoking as I have.

Q: Tell us a little bit about your daughter, Sunni. 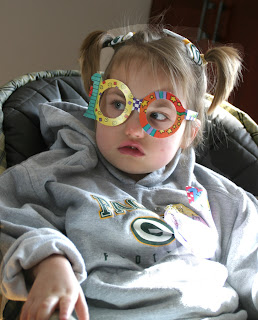 She has Mitochondrial Disease, an energy disorder affecting her at a cellular level. She has stalled at less than one year of development, cognitively and physically. This means she is unable to sit up on her own or bring food or drink to her mouth. She is blind, diabetic, and suffers from seizures that are kept under control with medication.

She has no real means of communication, although we have learned to decipher her different cries or vocalizations. Until recently, she suffered from bouts of severe pain, as is common with other children having this disorder. We were in and out of the ER every two to four months trying to isolate a cause. It appears to be due mainly to general neurological pain and to gastrointestinal pain due to very slow “motility” (digestion) and frequent constipation. A local pain specialist has been able to help us reduce the intensity of these episodes.

On the other hand, she is a beautiful child with her angelic face and striking blue eyes. She often looks skyward in the pose of a medieval saint. Sometimes, for no apparent reason, she giggles and laughs with glee. It is pure, unadulterated joy!

Q: Give us a glimpse into your daily life. What are some of the challenges you face as a result of Sunni’s medical condition?

We rely heavily on our Personal Care Attendant/Nanny, Melissa, who has been with us for over 4 years. She takes excellent care of both girls, along with Angie, who works three days per week. I work full time, but mostly from home, which allows me to take breaks to play with the kids and help Melissa from time to time.

Sunni requires continuous care, as she is unable to do even the most simple thing for herself. We constantly battle constipation, and keep a running “Sunni Poop Log.” She is classified as a brittle diabetic with blood glucose ranging from 30 to 600+. We have a pump now so that helps. As Sunni grows older, it becomes more difficult to bring her along in every situation. She can cry or laugh and carry on very loudly, which can be very disruptive, depending on time and place. Frankly, we end up doing a lot of “tag team” parenting. This has the effect of separating us so that we can run errands without having to bring Sunni and all of her gear, or spend time with our other daughter, Ava, in situations where we can’t leave her alone.

We have a volunteer one night each week who takes care of her while we spend special time with Ava. Sunni goes to school every day at one of the best school districts in the country for special ed. Not long ago, and today in some areas of the country, she would have been institutionalized, or at the least not be included in these programs, due to her low functional state. She receives various kinds of therapy and interaction with other kids. Although her actual interaction is limited, she just loves hearing the sounds of other kids playing. She has also become a distinct favorite among her teachers. We hope that this will plant seeds in their hearts as well.

Q: You mentioned in an email that you used to be staunchly pro-choice, but that after you had Sunni you became pro-life. Tell us about that process.

So dedicated to the pro-choice cause, that as a Senior in high school and freshman in college, I and a friend vandalized a “Choose Life” bill board out on the interstate that had been sponsored by the Knights of Columbus. We attacked the thing three times, as they kept putting it back up.

This attitude continued for years, despite growing more conservative politically. I was active in the local Republican Party and spoke out against the “abortion litmus test.” Angie was liberal enough to have voted for Al Gore in 2000. Since that time, she has become much more conservative and active in local politics. The best way I can explain it is this: Our dear little girl is probably one of the best arguments for abortion available. She is completely dependent, with a low quality of life that represents a tremendous burden to her parents and society in general. We were fortunate to have received a small revelation of sorts. It became clear that she was a powerful witness to the beauty of life, and certainly didn’t deserve to die. If she should not be aborted, then to argue for killing a beautiful, healthy child is a monstrosity.

When asked how he created such stunning works of art, a famous sculptor once said that he instills in his mind a clear image of the form and then removes everything that is not a part of it. In a way, God has shorn from Sunni nearly all of the adornments that would be considered part of a basic human life. She cannot act on her own, communicate, or possibly understand even simple concepts. She is left as a nearly pure example of human life without anything to distract us from its elegant beauty.

My wife and I both ended up converting to Catholicism. We could no longer stay in the Lutheran church, because they did not stand out against abortion. When you make the decision to leave the mainline Protestant churches behind, you are left with the two major, pro-life groups: Roman Catholic and Protestant Evangelical. I had been part of an Evangelical church (Assembly of God) in my youth, with the laying of hands, speaking of tongues, gifts of the Spirit, etc. It has become clear to us that the “born again” churches can offer no guarantee that they will not drift in the same direction as the mainline Protestants. I honestly don’t know what they will believe in another 20-30 years. There is no authority or hierarchy that is empowered to conserve the truth.

Another thing that attracted me to the Catholic Church was the rigor of its thinking. Writers like G.K. Chesterton and Fr. John Neuhaus really helped me along the road. Catholics aren’t simply submitting themselves to an all powerful, out of touch Pope with a list of antiquated rules. There are not only highly developed reasons for everything they believe, but they fit together into this seamless garment. I’ll have to admit that my view of Catholics wasn’t very high to begin with.

Q: There is an argument out there that sometimes abortion is the best thing to do for unborn children who are diagnosed with serious physical disabilities, on the grounds that it would save them suffering. What would you say to that? 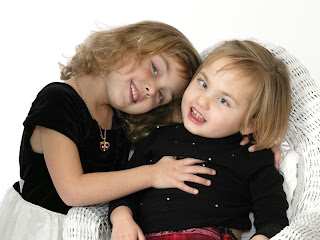 In objective terms, yes, it would save a great deal of suffering for us as well as her. Had she been born healthy, there is much we would not have learned. Some of what it has revealed has been awesome, some of it ugly. Regardless, this suffering is redemptive.

It has already lead us to the Catholic Church, the one institution that would reliably fight for her right to life. Sunni, and the way we care for her, is a witness to others. I sense in people a revulsion to seeing a person, especially a child in so damaged a condition. That is a natural reaction, and one that most labor hard to conceal. But it is important to Angie and I that Sunni be seen by others and that we be seen caring for her and enjoying our lives despite the sadness that it can bring.

Q: Unfortunately, our society might look at your daughter and say that she’s a “burden.” Some people might even imagine that your lives are worse for having had her. What would you say to that?

We are very grateful for the medical assistance, special ed, and other programs we may qualify for in the future. It has opened our eyes to the generosity of our culture. I think our lives would have been easier, and probably more shallow in some ways. I suppose we would have gone on to suffer other hardships, but they may not have brought us closer to God or caused us to ask the questions that we have.

Q: What would you say to any parents out there who have recently received a grave medical diagnosis for their child and are feeling scared about what the future might hold?

That this child will bring you closer to the mystery of life; that he or she can bring to you a deeper joy. If they were Christian, I would point out that this regard for human life, even damaged or limited, is what set early Christians apart from the pagans that came before them. In the more enlightened parts of the world, children like Sunni may be aborted or simply allowed to die in the hospital.

Q: Would you choose to have a child like Sunni?

I have a hard time answering this truthfully.

You may remember when Christopher Reeve became paralyzed, and word came out from his publicist within the matter of a couple weeks that said, basically, that this crippling incident was a great gift, that it taught him so much, and that he looked forward to whatever the future had to hold. I was skeptical when I heard this. Just once, you’d like to hear someone say, “This is obviously the worst thing that I could have imagined, I’m angry at God, and I wish I were dead.” That’s something we can all empathize with.

Hopefully, I’ll come to feel, deep down, the same way that I’ve been writing about it. No, I’d never willingly subject myself, my wife, or other child to the hardships that we’ve seen. I wouldn’t wish this on my worst enemy. But it happened, there’s a reason it happened, and our job now is to do the best we can to live it out and let it be a blessing to our family and others.

I want to thank the Berger family again for sharing their thoughts with us. I pray that their story will be a blessing to others, and please keep them in your prayers as well.

« EWTN / Sacred Heart Radio interview tomorrow
We have a book! »