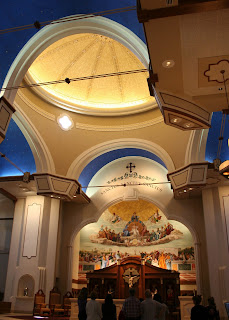 The ride home from the airport after we picked up our Kidsave child Rita was a little tense. We quickly found out that when they said in her bio that she speaks some English, by “some” they meant “not a single word.” A Colombian social worker named Maria was with us as well, and she didn’t speak much English either.

“Is hot too where you live?” I asked in broken Spanish.

They barely managed to nod and smile. They had arrived a day late after getting stuck in Atlanta overnight, and were too exhausted to strain for conversation topics. Rita was so tense and stressed by her strange new surroundings that she’d developed a bad headache. In the forty-minute drive back to our house we made some other efforts at chitchat, but it was hard work. Our group consisted of a suburban American family from Texas, a young career woman from the bustling city of Bogota, an orphaned child from rural Colombia, and we were all tired. It was pretty quiet for most of the ride home, the main sound being the air conditioner straining to beat the sweltering heat.

Then Maria started to say something, hesitating to make sure she chose the right words. “I hate to trouble you, ” she said apologetically, “but it’s very important that Rita and I go to Mass on Sunday.”

When I told her that we are Catholic too, everything changed.

In one moment we went from having nothing in common to having everything in common. We’d all read the same Bible passages at Mass the weekend before, so we talked about that for a while. Then the subject of the rosary came up, and we shared tips about how to make praying the rosary a daily habit (something we all wanted to do but hadn’t managed to accomplish yet). That led into a long discussion in which we gushed about Pope Benedict, which then got us talking about Pope John Paul II. While we were talking about our parish priests someone brought up the subject of Confession, and Rita mentioned that she was sure to go to Confession before she came on this trip. When the subject of Mary came up we were talking over one another, Maria and I both getting choked up while recounting stories of how God has used his mother to draw us closer to himself. Maria shared touching stories about how it helps her work with orphaned children to let them know that they not only have a heavenly Father, but that God gave them Mary to be their spiritual mother as well.

Over the next couple of days things were predictably awkward as we all got settled into the new routine, but our Catholic faith served as the anchor that held us all together. They immediately gushed over our painted tile of Our Lady of Guadalupe, and Maria noted that a friend of hers had the same Christ the Teacher icon that hangs on our wall (mine written by my long-lost cousin the monk). A little segment about St. John Vianney came on the EWTN-Spanish channel, and Rita was uncharacteristically talkative as she told us all about how his life has inspired her, impressing me by knowing off the top of her head that his feast day is August 4. I had given Rita a disposable camera, and later we’d see that the first picture she took was of our framed print of this beautiful photo of Pope John Paul II which hangs in the hall outside her bedroom door.

When we went to Mass, the unity we felt was palpable.

As we walked into the sanctuary (pictured above), we all dipped our hands in the holy water and crossed ourselves without even thinking about it. We slid into the pews and Rita smiled as she pointed out a nun sitting in front of us. Maria pulled Rita close and pointed to the red candle over the tabernacle at the front of the sanctuary, whispering that Christ is here too.

The service started, and I saw Rita’s body relax as she fell into the familiar rhythm of the Mass. Though she wasn’t able to understand a word of our pastor’s homily, she could read God’s Word along with us in the Spanish-language Bible translations provided in the missalette; and the central reason we were there, the Eucharist, surpassed any language or cultural barriers. We moved as one — Rita, Maria, our family, and everyone else in the building — as we crossed ourselves at the beginning of Mass, traced the sign of the cross across our foreheads, lips and hearts before hearing the Gospel, knelt as God was made present, stood to say the Our Father, then knelt again before receiving Communion, our external conformity of movement symbolic of the inner conformity of belief. Though I’d known all along that technically Rita and Maria are our sisters in Christ, watching how seamlessly they fit into the congregation at the Mass made me see what a true filial bond we really have.

After the Mass Rita and Maria took a stroll around the sanctuary, familiarizing themselves with the church. I sat in a pew for a moment and watched them move from place to place, chatting about the Stations of the Cross and our statues of beloved saints Faustina and Martin de Porres, stopping for a moment to pray in front of the image of Our Lady of Guadalupe. Rita began to move around the church as if it were her own living room, smiling freely, all the tension gone from her body.

I’ve read stacks and stacks of books with high-minded treatises on Catholicism and the Church as the mystical Body of Christ, but it wasn’t until that moment that I really got just what a gift Jesus gave us when he established a Church. I got it because, seeing Rita at Mass that day, I saw what a gift it was for her.

She’d arrived here an orphan without a home, tired and weary from a tumultuous journey and a more tumultuous life, blown to and fro by every kind of human inconsistency, finding herself living in a foreign land in a new house, surrounded by strangers. And yet through the Church we were united immediately as a family, not only in the core beliefs about God and life but even in our surface-level expressions of faith like blessing ourselves with holy water or praying the rosary or lighting candles to symbolize prayers. As I sat there in the pew that day and watched Rita walk through our sanctuary, seeing her rest in the soothing familiarity of her surroundings, my heart swelled as I realized that through his Church God had given her not just a family, but a home.