Inconvenient love: A lesson from a movie theater 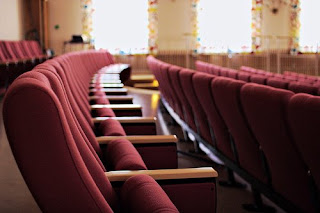 Last week I took our Kidsave child Rita and the Colombian chaperone Maria to see a free morning showing of the movie Kit Kittredge that one of the local theaters was offering. Rita put on one of her favorite new outfits, and she and the chaperone were excited about this special treat.

The theater got dark just as we walked in, making it difficult to find a place where we could all sit together in the crowded theater (which was especially important since neither Maria nor Rita speak English and wanted to be able to ask me questions if needed). Maria slipped into a row where there were a group of seats together in the middle, but by the time we all got there we realized that we were one seat short. Luckily there were a couple empty seats at the end of the aisle, so I leaned over and apologetically asked a lady sitting with her child if they’d mind scooting over one seat so that we could all sit together.

Based on her reaction, for a moment I thought she must have misheard me, thinking that I’d asked if I could borrow her credit card to buy extra-large popcorns and drinks for the entire theater. With a loud sigh she shoved her purse over to the seat beside her, and somehow managed to make the trip from her current seat to the one next to it look like a journey equivalent to summiting Everest. “I won’t be able to see the movie now!” she grumbled, pointing out the height difference of the person in front of her new seat (which didn’t look like that big of a deal to me). I immediately made a sincere offer to just sit somewhere else so that she could have her original seat, but she declined, the voyage of eleven inches being too arduous to repeat again.

After the movie got started, I had to laugh when I realized that one of its big themes was showing kindness to others. At one point toward the end, when Kit and her friends saved a group of people from trouble that included an orphaned child, I looked over to see the lady watching the scene with rapt attention, even dabbing at a tear at the corner of her eye.

The irony was too rich: she’d just bristled at helping an orphaned child have a special day at the movies so that she could better enjoy the movie about helping orphaned children.

I have to tell you, I was really enjoying the warm glow of righteous indignation there for a while, stopping just short of tattling to God, “Did you SEE what she just did?! I am a TOTAL SAINT compared to that woman!” And then this plank in my eye started bothering me, taking all the fun out of judging the woman sitting next to me.

The more I thought about her actions, the more familiar they began to seem; eventually I realized that what was most likely at the root of her actions is something I’ve struggled with for a long time now: a great desire to help others, with the unspoken restriction that the helping be done on my terms.

I’m sure that every one of us in the theater that day — including the seat lady — were filled with genuine warmth at the scenes of Kit and her friends giving a hand to women, children and homeless people in need. I’m sure that all of us — again including the seat lady — have done plenty of things in our lives to help others such as volunteer work, giving money to the homeless, etc.

But recently I’ve started to notice a line in the sand that demarcates the territory of the saints, where “helping others” turns into “truly showing the love of Christ to the world, ” and it’s a line that is painful to cross. On one side of the line is a sincere willingness to show love to others; on the other side is a sincere willingness to show love to others even when it’s unexpected, inconvenient and we get nothing in return. I’m sure the lady from the movies believes that it’s important to be kind to others…just not when it involves unexpectedly sitting in a seat that she doesn’t like. Maybe I don’t have strong opinions about where I sit in movie theaters, but how often do I put up my own boundaries about the exact circumstances under which I’ll show love? I am happy to Christ to the world…as long as I’m not in a hurry, cleaning up cat vomit, getting insulted by relatives, dealing with surly inanimate objects, arguing with atheists, etc. The list goes on (and on, and on…)

Now that I’ve been a Christian for a few years I’ve been thinking a lot about how to get to a deeper level of conversion, trying to figure out what exactly it looks like when a person fully, unconditionally surrenders her life to God. I don’t yet have the complete answer, but I’m starting to think that it begins with simply learning to show love when it’s most inconvenient.