A few weeks ago I met a wonderful couple named Kimberly and Jimmy who are in the process of adopting two HIV-positive children from Ethiopia. I enjoyed talking with them so much that I asked if I could interview them for my blog to share their story with you. The following is the first of a three-part interview, written by Kimberly. It’s a long post but I hope that you will find, as I did, that it is well worth your time to read the whole thing. 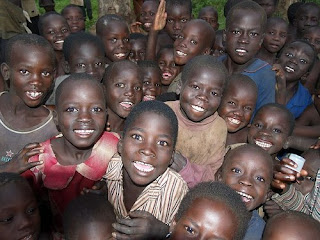 Q: Let’s start by talking about your discernment. How did your faith play a role in all this? Did you go into the adoption process intending to adopt HIV-positive children?

No. When we first set out to adopt internationally, the thought of adopting a child with HIV never once occurred to us. (In fact, I don’t think we even knew that adoption of HIV-positive children was possible.) Much the opposite, our very first thoughts about adopting a child were so common that the international adoption world has an acronym for it: AYAHAP. As Young And Healthy As Possible.

That’s still what the majority of adoptive parents end up requesting: a single baby, preferably a girl, as young as possible and with no known health issues. But pretty quickly after God set us on the journey of international adoption, we realized the AYAHAP path was not the path for us.

Q: So how did you go from requesting a single baby girl, as young and healthy as possible, to adopting two siblings, a brother and sister, ages 2 and 6, both HIV-positive?

Strangely enough, it was God working through a 12-year-old boy — a boy whom we’ve never met and likely will never meet — that truly opened our eyes (and hearts) and changed our path.

For the sake of this interview, I’ll call this boy “Essayas.” That’s not his real name, but it’s a most appropriate substitute. In Amharic (the main language of Ethiopia), the name “Essayas” means “God’s helper.”

So we’ll get to “God’s helper” in a moment. But first, God chose to speak to me directly.

At the beginning of 2008, I had an epiphany. I don’t know any way to describe it other than that, and I’m grateful that the English language contains the perfect word for it: epiphany, “a sudden, intuitive perception of or insight into the reality or essential meaning of something, usually initiated by some simple, homely, or commonplace occurrence or experience.”

One day last year, I was working at my desk in my home office (a most commonplace occurrence), when I suddenly had a flash of insight — not about my work but about my life. As I was lost in thought, it was as if God gave me an unexpected glimpse of the big picture of my life, of the essential meaning of things. And I knew, abruptly and immediately knew, that international adoption was meant to be a part of our lives, that my husband and I were being called to adopt children.

I realize this might sound bizarre or flaky or just downright unbelievable, but that’s exactly what happened. I can’t think of a single other instance in my life where I’ve had a comparable experience, yet I knew then (and still know) beyond all doubt that we are supposed to pursue international adoption, that it’s a part of God’s plan for our family.

Now, I just had to convince everyone else of this sudden insight! When my husband came home from work that day, I told him about my experience. And though he was very surprised (we were, after all, comfortably childless and completely content with our lives), he agreed to at least think and pray about the possibility. I didn’t say much more about it but just waited and prayed. Soon, after his own share of prayer and thought about the idea, he arrived at the same conclusion.

And then, the adoption adventure began. We began looking into what country to adopt from and quickly felt led to Ethiopia. Then, almost as a default, we assumed that we would adopt a baby girl. That’s what people do when they adopt internationally, right? Adopt a baby girl, especially since she would be our first child. We’d both grown up with sisters; we had a young niece; a baby girl must be the way to go. So we told our family and friends about our decision, and they rejoiced. Everyone was ready to welcome a healthy baby girl into the family.

I began researching voraciously — calling adoption agencies, poring over adoption blogs, reading countless books on adoptive parenting. But the more I researched and the more I prayed, the more I began to question the wisdom of our assumptions about what kind of child to request.

And then Essayas showed up. As I was researching different adoption agencies, I received a waiting child list from one agency. On it was a 12-year-old boy — a healthy child, but a child who was quite a bit older than most kids waiting for adoption. A 12-year-old boy? Not a girl? Not a baby? He wasn’t anything like the child we’d first planned on, but his biography was compelling. And the more we thought about it, the more Essayas seemed like he just might be the perfect fit for our family.

But first, we wanted to pray about it, and naturally, we asked our family members and friends to pray with us, as well.

And that’s when…well, I don’t know a much nicer or more accurate way to say it than “everything hit the fan.” Some people were scared of us adopting a boy. Others were scared at the thought of us adopting an older child. Virtually no one supported us, and everyone was vocal about it. Yet, to their credit, they all agreed to pray for us, to pray that God’s will would be done, whatever that was…though surely it couldn’t be a 12-year-old boy, could it?

So we all began praying about Essayas (some more grudgingly than others!), and in the meantime, my husband and I fought for this child. We advocated for him. I even tracked down other adoptive parents who had actually spent time with Essayas in Ethiopia. And, as it turned out, Essayas was universally loved, a wonderful kid. More than half of the adoptive families who had met him wanted to adopt him themselves but couldn’t for various reasons. And the more we argued for Essayas’ right to be a member of our family, the more we felt like he was a member of the family. He had been waiting for a family for months. Surely that months-long wait must be because he was meant for our family.

So we made our decision to adopt him. And miraculously, by then our family and friends had come around, too. God spoke to them, in one instance quite literally, and the message was always the same: do not fear. “For God has not given us a spirit of fear, but of power and of love and of a sound mind.” (2 Timothy 1:7) We all marveled at God’s goodness in revealing Himself this way. And we rejoiced that Essayas, the 12-year-old boy who, according to one adoptive mother who had met him, “really, really, really wants to have a mom and dad…a family to love him, ” would soon have a family.

But as it turned out, that family wouldn’t be us. Essayas had been on a waiting child list for months. We had been praying about him for weeks. And the day before we turned all our adoption paperwork in (we’d had to wait an extra week to get a doctor’s letter because my doctor had suddenly gone out of state), another family stepped forward to adopt him. All our praying and pleading, all the strife and heartache had amounted to nothing. We’d missed out on Essayas, the child we’d fought for, by a matter of hours.

Q: That must have been so difficult. How did you react?

I’d like to tell you that I reacted stoically, that I meekly took it as a sign of God’s will and moved forward with our adoption with grace. But I didn’t. Both my husband and I were completely devastated. We could not understand why God would put Essayas on our hearts so strongly, why God would have us advocate for this child so much, to the point of seriously endangering our relationships with friends and family members, only to have it all amount to nothing.

As I wrote to one friend at the time, “While I am not typically a very emotional sort of person, I have just been bowled over with grief by this. It seems strange, I know, to become so attached to a child you’ve never met, but the sense of loss has been overwhelming and crushing…Even though I know God has called us to adopt, I am tempted to turn away from the whole thing — at the moment, it just seems like an exercise in despair.”

And it was flooded with that sense of despair that one night I called out to God for what seemed like the millionth time. “God, there has to be some purpose to this! All we’ve done is what you asked us to do. Please let us see that you have some purpose behind this suffering.” It was a couple weeks after our adoption of Essayas had fallen through, and I had been at home, crying yet again. As I sent up this angry plea to God, I remember feeling like it was bouncing off my bedroom ceiling, drifting back at me like all the other angry pleas I’d sent up before. Sighing, I gave up on prayer and returned to the book I’d just started reading to distract myself. The book was called There Is No Me Without You.

Those of you who have read There is No Me Without You can probably guess where my story is going. But for those who haven’t, please let me explain. There Is No Me Without You is a nonfiction book written by a lady named Melissa Fay Greene, describing the HIV/AIDS epidemic in Ethiopia. Like most people who decide to adopt from Ethiopia, I had started reading the book to learn more about the country of Ethiopia and why so many children are available for adoption there. As I’d already found out, when you adopt from Ethiopia, HIV/AIDS is almost inevitably part of the adoption equation.

So I knew what the book was about before I began reading it. Yet what I did not expect, and what this book reminded me of, was the idea that children with HIV can be adopted. By that point, I’d run across a few vague murmurings of such a concept. But, in my moment of despair, when I’d asked God for clarity and purpose in the midst of heartache, I was struck anew by the thought. People adopt children with HIV?

Lest you think that I stumbled across this idea and clung to it in my hopelessness, let me assure you I did no such thing! In fact, immediately after the thought occurred to me — I wonder if our adoption of Essayas fell through because we’re supposed to adopt a child who is HIV positive? — I thrust it out of my mind. Mere emotionalism, the pragmatic part of me argued. This idea probably occurred to me because I’m grasping at straws, looking for meaning anywhere. So I promptly tried to forget it and move on.

Continued in Part 2…
Photo of African orphans by louris yamaguchi

« Thank you!
About Kidsave (infopost) »