I am delighted to post Part 2 of my interview series with a couple named Kimberly and Jimmy who are adopting HIV-positive children from Ethiopia. Make sure you’ve already read Part 1 since some of Kimberly’s answers here refer to what she wrote there. 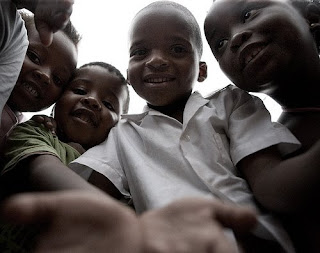 Q: At the end of Part 1 you were saying that when the idea of adopting HIV- positive children first came to mind, you tried to forget about it. What happened next?

I tried to thrust it out of my mind, but I couldn’t. The idea of adopting a child with HIV clung to me. Finally, the sheer persistence of these thoughts lead me to bring up the subject with my husband. I told him I was uncertain about the idea but asked him to pray about it. He agreed (albeit somewhat reluctantly). We prayed about it ourselves for a while before approaching the rest of our family and friends asking them to join us in prayer.

Remember what I spoke about last time, when I said that the idea of adopting an older child really freaked out our friends and family? Well, “hit the fan” does not even begin to describe the reaction when we asked friends and family to pray about us adopting a child with HIV. Suffice it to say that some people were extremely upset. Nevertheless, we persisted in asking them to pray for wisdom and discernment for us, that we would all discern God’s will, no matter what it was. And, to their credit, they did pray for God’s will to be revealed to us all…although surely that wouldn’t include a child with HIV, right?!

After months — at least eight months that we all spent praying, talking, and researching — we realized that God’s will was not for us to adopt a child with HIV…it was for us to adopt two children with HIV. In February, we went back to our adoption agency where our application had been on hold and requested only HIV-positive siblings. We had a referral within a few weeks, and it’s been a blissful, crazy, frustrating, wonderful whirlwind ever since.

All that to say that I truly believe that Essayas was a part of God’s plan for our adoption, though not in the way we had first thought. Now, looking back, I can see how God used him to open our family’s eyes to the beauty and potential of adopting a child that was not “the norm, ” not a little girl as young and healthy as possible. Because if we had come straight out of the gate saying, “We’re going to adopt siblings! Older siblings! And one’s a boy! And they both have HIV!” I don’t know that our family would have ever come around. Heck, my husband and I wouldn’t even have considered that kind of situation when we were first exploring adoption. I’m afraid we all would’ve been too paralyzed by fear to use the power, love, and sound minds that God had given us!

But God used Essayas to open our eyes and help us break from our fears. First, it was openness to gender — maybe we could adopt a boy and not just a girl like we’d always thought. Then, maybe, we could adopt an older child. Piece by piece, as we kept praying and seeking God’s plan for our family — even though it was painful seeking! — we could feel God stretching our minds and hearts to accept, and eventually desire, things we had never even conceived of on our own.

And now we are so blessed to be welcoming a precious brother and sister into our family! They are gorgeous and joyful and seem to have such sweet spirits. We can’t wait to meet them and bring them home soon!

And happily, my husband and I are not the only people who can’t wait to meet them. Our entire family and all our close friends have rallied around us in a way that can only be described as miraculous. We knew that disclosure was going to be a big issue for us, but after much prayer and thought, we decided to be completely open with people about the children’s HIV status. And people have been amazingly supportive — not merely tolerant but thoroughly excited to meet these children and play a part in their lives. The support we’ve received has been astounding and humbling and beyond what we could have ever wished for, even in our wildest dreams.

A year ago, when I was sunk in despondency over our loss of Essayas, I wouldn’t even have been able to imagine where God would take us — and whom He would take us to! — in the months that followed. It’s been one of the most emotionally painful years of my life, but suffice it to say that I have learned anew that God’s ways are not my ways, His thoughts are not my thoughts, and He often uses the most unlikely of vessels — 12-year-old boys, for instance! — to display the surpassing greatness of His power. Praise the Lord!

Q: Do you worry about contracting HIV from your children?

No. Despite persistent myths to the contrary, HIV is actually fairly difficult to contract. HIV has never been transferred through casual contact or everyday household interactions. You can share toilets, eating utensils, toys, food, and drinks, with zero worry about transmission.

(For perspective, the risk even through sexual contact is far smaller than people think. A single episode of unprotected vaginal intercourse with an HIV-infected person presents a risk of 1 per 500 to 1000 [0.1 – 0.2%].)

Q: What about health insurance? Will your kids be covered?

As to the second part of the question, in most situations, it’s required that insurance companies cover adopted children in the same way as biological children. There are a few rare exceptions, though, and you need to check with your individual insurance company for details. (For more info, check out this article and this article.)

Q: What are some good resources for people who want to know more about adopting HIV-positive children?

Also, the websites Positively Orphaned and Positively Adopted both serve as excellent compendiums of interviews, blogs, websites, news stories, and medical reports related to the adoption of children with HIV.

Most of all, if you feel drawn to the idea of HIV+ adoption but overwhelmed by the enormity of the HIV/AIDS epidemic or by the sheer number of orphaned children throughout the world, let me encourage you not to let your research overwhelm you. As Edward Everett Hale’s words remind us, “I am only one, but I am one. I cannot do everything, but I can do something. What I can do, I should do and, with the help of God, I will do.”