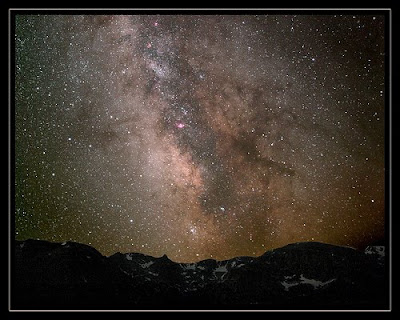 I was reading author and former atheist John C. Wright’s fascinating conversion story the other day, and something he said brought back an intense memory from this time of year back in 2005. He wrote:

A friend of mine asked me what evidence, if any, would be sufficient to convince me that the supernatural existed. This question stumped me. My philosophy at the time excluded the contemplation of the supernatural axiomatically: by definition (my definition) even the word “super-natural” was a contradiction in terms. Logic then said that, if my conclusions were definitional, they were circular. I was assuming the conclusion of the subject matter in dispute.

A couple days after I started this blog I went on vacation to the beautiful Ruidoso, New Mexico. The subject of God was very much on my mind. For the first time in my life I was open to the idea that God might exist — or, at least, trying to be open to the idea — but I felt lost and confused and didn’t know where to turn.

I was becoming increasingly dejected that I didn’t seem to be getting anywhere spiritually. I didn’t feel God’s presence, I wasn’t basking in the warm feelings of Jesus’ love for me. I didn’t feel…anything. And it didn’t seem like I ever would.

The second night we were there I couldn’t sleep. I was tossing and turning, the question of God weighing too heavily on my mind for me to sleep. I was depressed about some other things going on in my life and felt particularly low and hopeless. I felt like I was hitting a spiritual rock bottom, so I begged God to help me.

I begged him for a sign to let me know he exists.

I felt so bad I started crying and, not wanting to wake my husband, around three o’clock in the morning I decided to get out of bed and go sit on the balcony. Our room boasted a spectacular view of the Southern Rocky Mountains, looking out at two huge peaks. When I stepped outside I was stunned to see a storm raging silently between the two mountains. The only sound was the rustling of a mild breeze as the lightning flashed brilliantly to illuminate the great cloud, probably a hundred miles away. It must have been 60, 000 feet tall with raging winds, battering the ground below with rain or hail; and yet it seemed like it was framed neatly there between the two mountains just for my amusement. An artist wouldn’t have painted it as such because it would seem too contrived.

The rest of the sky was completely clear, and packed with stars. Just as I looked up to try to pick out some constellations, a large meteor sparkled across the sky. Then another. I saw probably eight in total that night, many of them large with long, dazzling trails. It was breathtaking.

It was the middle of the night and the grounds below were still, the hotel silent. I was probably the only person watching this display.

“Well, ” I smirked to myself, “be careful what you wish for.” I had asked for a sign, and this was about as “sign-ish” as it gets. What more did I want? Yet I wasn’t convinced. Even as my heart raced upon witnessing the grandeur before me I wrote it off as just a storm and an unexpected meteor shower. I refused to believe that there was anything more to this than a random cumulonimbus and some dust entering the earth’s atmosphere.

I realized then that there was no sign that God could give me.

If this wouldn’t suffice, nothing would. I wasn’t open to it. Had I walked out on the balcony to see “HI JENNIFER, IT’S ME, GOD!” written across the sky I would have been impressed but ultimately written it off as a practical joke. If Jesus himself materialized to shake my hand and greet me I’d write it off as a hallucination. Because, in my mind, there was a natural explanation for everything, so therefore anything supernatural was impossible.

I arrogantly assumed that because I knew how something worked that God couldn’t be involved. I watched the storm and thought, “That’s not God, that’s just condensation!” And the tightness in my chest and tears welling up in my eyes? “That’s not my ‘soul’ yearning for anything, that’s just chemical reactions in my brain!”

This was another major turning point for me. I realized that night that I wasn’t going to see God if I was determined not to.

« When God locks doors
Stopping to smell the roses: A practical guide »