Occasionally I post updates about the progress of my book for the amusement of fellow writing nerds. Those of you who don’t care about writing and/or the fact that I’m writing a book can safely skip this one and move on to something more interesting. (Like this blog post by a local man who doesn’t believe in killing scorpions, EVEN WHEN THEY STING HIM IN BED.) 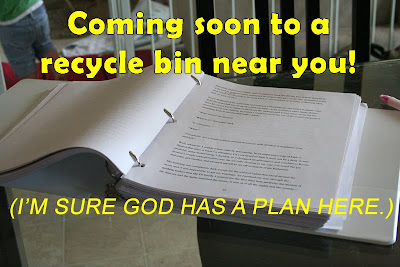 Well, I finally went back and re-read the first draft of my book after a two-month hiatus. I think I secretly hoped that I’d find that my memories of a mediocre draft were completely inaccurate, that I’d behold my completed book to realize that I had written The Great American Memoir without even realizing it. Uhh, no. Now that I’ve looked at it with a fresh set of eyes I see that it needs a lot of work to even get it to the level of being decent. Like, a whole lot.

I’ve been avoiding coming to this conclusion for a couple weeks now, but after a lot of thought and discussions with my husband and some trusted friends I’ve realized that I need to rewrite it. “Rewrite” as in open up a blank Word document, “it” as in the 212-page, 78, 000-word book that I JUST SPENT A FREAKING YEAR WORKING ON.

Well, I’m being slightly melodramatic. I think there are a couple chapters that can be salvaged, and there are plenty of little scenes throughout the book that are worth keeping. But it’s not a matter of just editing and revising what I have. I don’t know how I didn’t see it until now, but I was approaching the entire subject the wrong way — writing in a voice that I don’t usually write in, taking the subject too seriously, and not having a clear vision of the structure of the story from the beginning. The result isn’t terrible, but it’s also not very good. I don’t think I’m capable of writing a classic for the ages, but I do think that I am capable of writing a book that’s a good read, and this one just isn’t there.

For a few days I was tempted to just polish up what I have and send it over to my agent. With his help I think it could have been fixed up enough that he could probably even convince some publisher to buy it. I had poured such a tremendous amount of time and energy into this project that I was ready for it to be over, to move onto something else. I found myself at a fork in the road: I could continue to let myself mentally check out of this project and just pray that God would find some way to salvage it, or I could check back in, rekindle the energy I felt when I first signed the contract with my agent, and do what I needed to do to put a good book together. I decided to do the latter. And, surprisingly enough, I’m now really excited about it — maybe even more excited when I first started last year, since this time I feel like I know what I’m doing. My agent supports this decision as well; he’s told me from the beginning to forget about timelines and just write something good.

In a perfect world I would not have, you know, spent TWELVE MONTHS on a project that was headed in the wrong direction. But I say with my teeth only slightly gritted that I’m sure God has a plan here, and I know that my effort was not entirely wasted since some of the material is still usable. Besides, at least I learned a lot. And I know without a doubt that it’s the right thing to do, even though it demolishes the timeline I originally had set in my mind. It might not mean that the new version will be great, but at least it will be much better. If even just a couple of people take the time to read what I wrote, I want them to know that I gave it 100%, that it was truly my best effort, and that I took the time to get it right.