Stopping to smell the roses: A practical guide 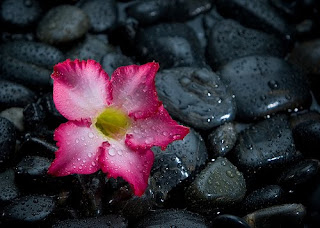 The other day I was picking up my children from my mom’s house, and just as I was about to have them all in the car my four-year-old and three-year-old broke away and dashed into the neighbor’s yard. I told them to come back, but they were enchanted with some dazzlingly colorful new flowers the neighbors put in their flowerbed.

“Why do flowers smell good?” my son asked. “What is this flower called?” my daughter wanted to know as I struggled to get my other two children in the car.

They persisted with their questions about the flowers, and finally I had to go get them from the neighbor’s yard and make them get in their carseats. I would have loved to have been able to settle down into the grass and have a leisurely chat about flowers, but we just didn’t have time. I needed to get home to make an important phone call, I was late getting started on a crockpot recipe for that evening’s dinner, and we had to hurry and get to a friend’s house for a lunch playdate.

Later that night I forwarded an email to some family members that ended with the admonition, “Don’t forget to stop and smell the roses!” I sat back and asked myself: Do I ever do that? Do I ever really stop to smell the roses on the path of life, or do I just forward emails about it?

The obvious example of dragging my children off when they had literally stopped to smell some flowers was the first thing that came to mind, but I thought of countless other examples as well. In the past few days alone I had brushed off an opportunity to let my children help me cook dinner, bristled when my husband wanted to take the long way home from Mass to drive through a lovely historic neighborhood, politely declined when the neighbor girls asked me if I wanted to watch some bicycle tricks they’d perfected — and those were just a few examples that I thought of off the top of my head!

I realized that I want to have the kind of life where I stop to smell the roses, where I embrace the opportunity to take unexpected detours and savor those special spontaneous moments with loved ones…but I hardly ever do it. In fact, to be totally honest, I’m sometimes annoyed when those kind of situations arise.

I’ve spent the past few days thinking about what I need to change to make this something I actually do rather than something I just forward emails about, and here’s what I’ve come up with:

I think that the biggest problem I have in this department is lack of buffer in my daily schedule. When you’re trying to cram 15 hours of work into an eight-hour period, you really don’t have time to stop and smell the roses.

To use my example from above, I don’t think it was a mistake to rush my children into the car. I barely had enough time to start that recipe and make that phone call before we had to be at our friend’s house; a few minutes meandering through the neighbor’s yard was a few minutes we didn’t have. The mistake I made wasn’t when I told the kids to hurry, but when I decided to cook, make an important phone call, have the kids visit my mom and go to a friend’s house all in the same morning.

I’ve written about this many times before — like when I realized that I couldn’t even do half of the things I wanted to do and that I am more tempted to commit certain types of sins when I am overbooked — but I never cease to be amazed at how easy it is to slide into getting overloaded. When I look at my calendar and see that I only have “go to grocery store” penciled in for the next day, it’s so tempting to think that I can do more than that. I have a huge tendency to forget about the invisible to-do list items of preparing and cleaning up after three meals, diaper changes, naptime routines, potty help sessions, a little down time for me, and all the work involved in just keeping the house at a level that I wouldn’t be arrested if someone from the Health Department were to unexpectedly stop by. When I actually stop and take a look at all the things I have to do that aren’t written down on the calendar, it becomes glaringly obvious that I really can’t expect to do more than just go to the grocery store.

It’s also worth noting that this kind of thinking can be a problem in any state of life. In fact, I was probably more tempted to let myself get overbooked before I had children because I thought of myself as having so much more free time than I actually did.

I talked about this more in my post about surviving the baby/toddler years, but I’ve learned the hard way to be very wary of any commitments that involve deadlines or hard schedules. For example, if I have to take one of the kids to the doctor at 2:00 and be at a prayer meeting at 7:00 and have an article to an editor by 8:00 tomorrow morning, my opportunities for rose smelling are severely limited. Of course some of that is unavoidable (like doctors appointments), and some of it might be worth it (like getting paid to write about something I enjoy), but I’ve found it important to acknowledge that every hard deadline I commit to adds a significant amount of stress to my life, and evaluate the tradeoffs accordingly.

If you’re a control freak who has a tendency to get fixated on the way you want things to go, stopping to smell the roses is actually pretty annoying. I know this from personal experience. That day that the neighbor girls wanted to show me their new bike tricks, for example, the problem wasn’t that I was overbooked (for once); it was simply that I was set on the idea of using that time to do something else, and I didn’t want to change. When they asked me to come outside my mind flashed to what I’d planned to do during that block of time and I got that NO WAY THE WORLD WILL STOP SPINNING ON ITS AXIS feeling I often get when I contemplate not being able to do something I wanted to do, and I ended up missing an opportunity to share something special with my little neighbors.

An attitude of gratitude

In order to stop and smell the roses, you have to see them first; and if you’re focused on problems and discomforts, you’re probably going to walk right past a lot of little roses that God puts in your path. I was hit over the head with this lesson the night that I was trying to get dinner on the table and my children were underfoot. It had been a long day, I was tired, I was preoccupied with worries about some medical bills, and I ended up shooing them out of the kitchen in irritation. Later I realized that I had passed up the opportunity to let them join me in the cooking — the type of thing that life’s most precious memories are made of — all because I was too focused on the negatives in my life to see that a beautiful moment was right in front of me. (If you need some inspiration for appreciating all the little gifts of daily life, Ann Voskamp always has some wonderful thoughts on that subject.)

That completes my “good ideas that I am horrible about implementing in my own life” list of tips for how to really stop and smell the roses every day. If anyone else has struggled with this, I’d love to hear about it. How do you make sure you appreciate life’s little unexpected joys on a daily basis?