By popular demand, I’ve put together a “Best of Quick Takes about Yaya” post collecting all the times I’ve referenced my mother-in-law in 7 Quick Takes. 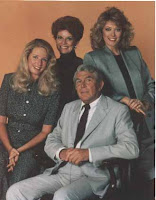 Matlock has become a verb in our family, specifically when used in the phrase “getting Matlocked.”

When Yaya is in town, one of the activities that we can all agree on as fun and not offensive is to watch reruns of the 1980’s show Matlock, which we record on our DVR specifically for this purpose. What has happened more than once, however, is that we end up getting sucked into one of the mysteries only to find out that we accidentally recorded a two-hour made-for-TV movie or that the episode we’re watching is continued in a Part II. But by the time we realize it we cannot rest until we see how it ends, so we end up staying up ridiculously late to see the story through to the finish. This is called “getting Matlocked.”

Yaya is visiting for a week. This picture pretty much summarizes the trip: 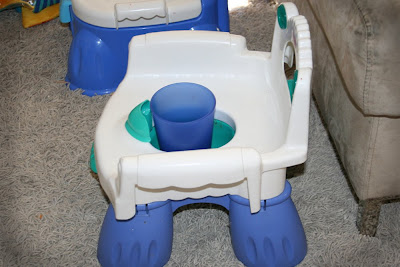 To my great distress, we saw a scorpion a few weeks ago (“a few weeks ago” as in “IN FREAKING FEBRUARY DON’T THESE THINGS EVER HIBERNATE!!!!!”). It is somehow not surprising that Yaya was involved (longtime readers may remember this classic Yaya + scorpion story). I heard her urgently calling the kids to come out on the back porch and ran out myself to see what all the commotion was about.

When we all got outside she was forlorn, explaining that she’d found a scorpion under the kids’ toy box and tried to catch it for them to play with but, alas, it was gone now. Having long since given up on trying to have the age-old “Are scorpions appropriate playthings for young toddlers?” debate with her, I feigned disappointed and turned to go back inside.

Just as I was about to close the door, on a hunch I asked, “Where did the scorpion go?”

If you were to look up “setting yourself up for failure” in an English phrase dictionary, this is what you would see: 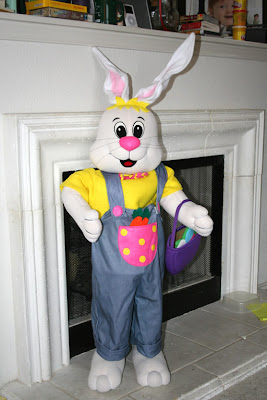 Yaya brought this life-sized Easter bunny when she came to stay this week. It’s evidently something she’s had for a while that she wants to keep nice, so she’s adamant that the kids not touch it. It is sitting in the middle of our living room. Our older kids are ages 4, 2 and 1. This awesomely huge bunny has his own little outfit, an Easter basket, floppy ears and moveable arms and legs. And they’re not supposed to touch it.

About every ten minutes my husband and I have to run off to another part of the house to secretly laugh hysterically when Yaya reacts with shock that one of the kids is yet again playing with the rabbit. Many a joke along the lines of “Maybe we could put a mountain of candy in the middle of the floor and tell them not to look at it!” has been made. 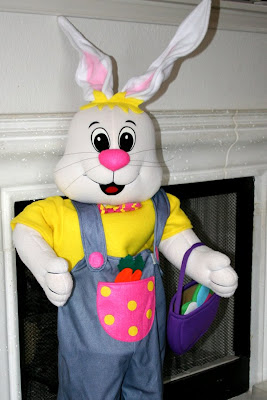 Yaya took him back to her house, the rabbit riding shotgun all the way down to Houston.

I have to admit, I miss the Sisyphean drama that unfolded hourly when he was here (described a bit in #2 here). Yaya would get the rabbit fixed up just right, then one of my little girls would bounce up and put a bonnet on him or take his little basket away. Yaya would react with shock — utter, complete shock — that the toddlers weren’t following her stern admonishment to not touch the brightly-colored, life-sized toy rabbit in the middle of the living room. She’d get him all fixed up again…and then my four-year-old son would come racing up and see how many times he could rapid-fire karate chop the rabbit before Yaya yanked him away. She’d get the rabbit all fixed up again and then…well, you get the idea.

After a glass of wine on Friday night I was inspired to do an interpretive performance of the events week, and went outside to yell at moths to tell them to STAY AWAY FROM THAT LIGHT. (Yaya was only mildly amused.) 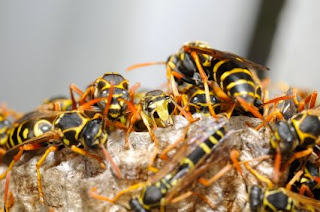 Speaking of my tendency to write about stinging insects, here’s a Yaya story from this weekend: Shortly after we arrived, I was on her back porch with the kids and looked up to see a thriving wasps’ nest right above my head. Under normal circumstances I would tell you that it’s important to control your phobias so as not to impart your own irrational fears to your kids. However, when I looked up to see 100 (OK, maybe eight) wasps buzzing around their nest about a foot away from my head, my reaction was something along the lines of “RUN FOR YOUR LIVES! NOW! NOW! BEFORE THE WASPS ATTACK US! THEY’RE GOING TO STING US!!! AAAAH!!! IT’S SO TERRIBLE!!!!!”

I had just dragged all the kids to safety out in the yard when Yaya walked outside, holding some scissors she’d gone inside to get. I shrieked a warning at her just as she walked under the nest. She looked up, shrugged, and knocked the wasps’ nest down with the handle of the scissors. The nest fell right next to her feet, angry wasps darting all around her, and she took a moment to wipe off the scissors with her shirt before strolling off.

And you guys thought I was kidding when I said that she’s nonchalant about being stung by scorpions in bed!