Of cat ownership and “little” sins 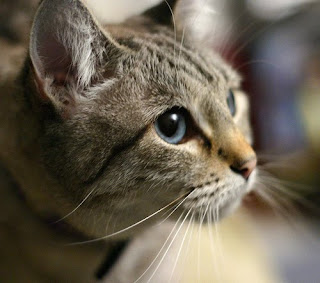 My post from Monday reminded me of a story that’s been in my “to write about” stack for more than a year, yet another lesson along the lines of “be very careful about not being loving at all times…”

Longtime readers may remember that a couple years ago I had some serious angst about the neighborhood kids frequently ringing my doorbell and running. The problem was that they tended to do it during my kids’ naptimes, and the fact that they would beat the door a couple times and hit the doorbell about five times was always enough to startle my children and wake them. I even talked to the neighbor kids about it, explained the problems it caused me, and they looked me in the eye and said they wouldn’t do it anymore. And then they kept doing it. And let me tell you. After about the fifth time I found myself sitting on the couch holding three young children who had previously been sleeping peacefully, all now fussing and crying from being woken prematurely, I started to see red.

One of the pranksters lived next door, an 11-year-old girl named Riley, and she and the others would often cross the line into our yard to play with a friendly white outdoor cat we’d inherited from the previous owner of this house. We were planning to give the cat to some friends since we never exactly signed up for petcare duties, but in the meantime I liked having her around, and I always watched the kids closely to make sure they didn’t harm her. It turned out that that was one area in which I didn’t need to worry; the neighbor kids, especially Riley, always seemed to treat the cat well.

One afternoon I walked out front and Riley and her friends shouted over to ask me where the cat was. I was so irritated I could hardly look at them. The day before I’d needed a break so badly, and they’d repeatedly rung the doorbell yet again and woke my children 20 minutes into their naps. I’d opened the door to try to catch them but they were too fast, and I was just standing there in the doorway, red-faced and on the brink of tears, as I heard them snickering from some hiding place a few yards away. Oh, and I felt old. And dumpy. And hated. And it brought back bad memories from junior high. (I emphasize all this woe-is-me stuff so that you will maybe think I’m a slightly less awful person for what I thought of next…)

I muttered that I didn’t know where the cat was in response to their question, but an idea occurred to me: after our friends took the cat, the next time the kids asked about her I could say something like, “Sorry, kids, the difficulty of having my children’s naps constantly interrupted stressed me out so much that I had to dump her at the pound!”

I snickered at my plan. That would be satisfying. I knew it wasn’t the right way to handle it, but, like any good sinner, I rationalized away such inconvenient thoughts. Sure, it would be somewhat sinful — it was a lie, and my vengeful motives were an act against love — but it would really be just a little sin. A harmless joke, really. No big deal. Maybe at some point I’d even tell them the truth.

Fast forward a few months: I disconnected the doorbell, and the Holy Spirit miraculously brought me together with the girls, who ended up becoming fixtures in my living room (that whole story here). Also, the cat stayed. Our friends couldn’t take her in so we adopted her by default.

About six months into my friendship with the girls, one Saturday afternoon Riley and Carmen stopped by my house while they waited for Riley’s mom to pick them up. Over the course of our friendship I had found out that the neighbors Riley lived with were not her parents; she was not able to live with her mom due to some kind of difficult situation. But today was a special day because she was going to get to visit her mom’s house for the weekend and even bring a friend! Both girls had fixed their hair and painted their nails bright colors for the occasion, packed some clothes and snacks into backpacks, and Carmen’s mom had bought them new little purses to take on their trip.

They said they only had a minute before she arrived, so we kept our conversation brief. But thirty minutes later, they were still there. They both began shifting uncomfortably on the couch.

Then Riley’s cell phone rang. She stepped into the other room and I heard a snipped of the conversation with her aunt in which she whispered, “She said 11:45…” I looked at the clock. It was 12:30.

Riley came back into the room and laughed nervously, saying that her mom was late sometimes. Then her phone rang again; she listened for a moment, then hung up. Her mom wasn’t coming. Riley indicated that this wasn’t the first time that something like this had happened, saying with a forced laugh that she figured that this is how it would go. I thought my heart was going to break in half.

Almost on cue my children opened the back door and let the cat in, and her presence in the tense living room was a welcome diversion for all of us.

Riley scooped her up and said, “I love Snowball.”

We’d never named the cat, so I was surprised to hear her called that. Eager to change the subject to anything other than the failed weekend plans, I asked her where she came up with that name.

Her cat? I asked her what she meant by that, and over the next few minutes I learned that the previous owner of my house had also asked Riley’s relatives if they wanted the cat, and they had said Riley could have her. He didn’t tell them that he also asked us if we wanted the cat; each of us thought we were the only owners. That explained so much! The kids being unusually vocal in asking about her, following her into my yard, the fact that the cat never seemed to eat that much — it all came together.

Riley proceeded to cuddle and kiss the cat, talking about how she would sometimes let her into her room when she felt lonely at night. “Sometimes I feel like she’s the only one I have to talk to, ” she said.

And then I remembered my little “plan.”

Let me just tell you, internet, that seeing how much that child loved that cat — her cat — and knowing now a little bit more about how difficult her life had been, when I thought about how close I’d come to letting her think her cat had been taken to the pound, I wanted to slink down into the baseboards like the scum that I was. I could hardly concentrate on the rest of our conversation because I was so busy inwardly shouting prayers of thanksgiving to God for having mercy on those of us who occasionally find ourselves caught up in a perfect storm of selfishness, thoughtlessness and intense stupidity.

I think about that moment of Riley cuddling her cat on the day her mom didn’t show up any time I catch myself rationalizing away some “little” sin. I already knew on some level that even the smallest acts against love hurt God more than we could understand; as I learned that afternoon, sometimes those little sins hurt our fellow human beings more than we could understand too.