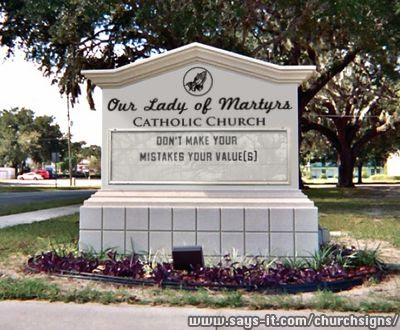 The other day I was driving around and saw a church sign that said:

DON’T MAKE YOUR MISTAKES YOUR VALUES

I thought it was a powerful message, one that could have saved me a fair amount of time in my conversion if I’d heard it early on. When I was first open to the possibility that God might exist, it was tempting to use my own life choices and beliefs (some of which were bound to be mistakes) as the golden standard, to find a belief system that told me that God thinks that I’m fine, everything I’ve ever done is fine, and everything I’m planning to do is fine. But as I quickly found out, you can’t find God until you’re willing to be vulnerable — vulnerable to the scary prospect of following the truth even if it leads you to a God who is much different than you might have imagined, and vulnerable to the possibility that some of the biggest choices in your life just might have been mistakes.

All those thoughts flashed through my mind as I drove closer to the sign, and just before I passed it I noticed that I’d read it wrong. It actually said:

DON’T MAKE YOUR MISTAKES YOUR VALUE

I liked this advice as well, and thought it made a nice follow-up to the misread message I’d just been thinking about. After you acknowledge your mistakes (i.e. sins) that have separated you from God, it’s tempting to believe that God couldn’t possibly love you as much as he loves people who haven’t screwed up as much as you have. It’s so important, as the sign actually said, to know that your mistakes are not your value.