Breathing with the Body of Christ 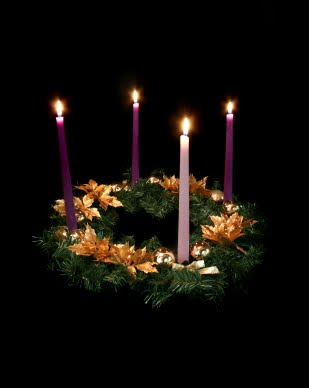 As I mentioned the other day, until recently I didn’t understand what Advent was all about. Actually, I didn’t completely understand what Lent, Easter or Christmas were all about either. The significance of the different seasons of the liturgical year was one of the last things that I researched in my long road from atheism to Catholicism; I had so many other tough concepts to explore that figuring out why Catholics didn’t eat meat on Fridays was the least of my worries.

But I went through the motions anyway.

In 2006, before my husband and I were even certain we were going to convert to Catholicism, I decided to participate in traditional Lenten practices. I’d heard people on the Catholic radio station talking about what they were giving up for Lent, and I decided to give something up too. I didn’t know exactly why I was doing it, but it sounded right on a gut level that it might be a good thing to take a step back from the decadence of modern life for a while, so I gave up something I really enjoyed: wheat/flour products. It was very difficult to pass up goodies like cookies, cakes, pasta, pizza and breads, but I stuck to it for all of Lent.

Giving up so many of my favorite foods for such a long time without a selfish ulterior motive like wanting to lose weight did an interesting thing to my state of mind: it naturally left me thinking about how often I felt entitled to whatever I wanted, and how rebellious I was at the whole concept of sacrifice.

The physical surroundings at the parish church where we were regular visitors only reinforced this mindset. The decorations were sparse, and the priests wore robes that were deep purple, the color of penance. The music was slow-tempo, serious and occasionally somber. There were no festivities on the parish calendar, other than the weekly Friday night fish fry where people got together to eat a meat-free dinner. The entire parish seemed to be in a slower, reflective state.

When the weeks-long Easter season rolled around, it was like a great exhaling to shift gears and begin a time of feasting, lavish decorations and joyous singing. The altar that had been bare for all of Lent was now banked with colorful, fragrant flowers as the choir belted out bright, merry tunes. Once again, even having only a basic awareness of what the Easter season was about, I naturally fell into a celebratory mood. It had been good to take a big step back from it all during Lent, and now it felt equally good to balance that with merriment and celebrations during Easter.

When Advent began later in the year, once again I merely mimicked what I saw other families doing, taking time to talk with the children about nice things we could do to make the baby Jesus happy, or lighting an increasing number of candles as the pre-Christmas weeks wore on. Our church was decorated with some simple green trees — nothing like the lavish decorations we’d see in the 12-day Christmas season that began on Christmas day, but pretty nonetheless. I noticed that they had the one candle lit, and knew that we would not see them all lit until the end of this season.

It wouldn’t be until months later that I really began to internalize the profound truths at the root of these practices, to embrace Advent as a season of waiting, or to have Lent inspire me to awe at the greatest mystery ever seen. For quite a while I was simply, almost blindly drawing close to the great Body of Christ, inhaling when it inhaled, exhaling when it exhaled. And yet these motions began to have a profound effect on my soul, even when I didn’t know the how’s and why’s behind them. It started me thinking in the right direction, regularly breaking me out of the apathetic routines and thought processes of my daily life as I changed my habits to move the with motion of the Church. This “breathing” with the Body of Christ functioned as a sort of CPR to resuscitate me from the spiritually dead state I was in.

Obviously it’s not ideal to go on too long participating in customs that you don’t completely understand, and I certainly have a deeper, more spiritually fulfilling relationship to the liturgical year now that I understand each of its seasons better. But, as another Advent rolls around and I’m reminded of how I once didn’t understand this season at all, I’ve been thinking about how much the soul benefits from participating in the liturgical year, even when a person is just going through the motions. The simple process of clinging to the Body of Christ, breathing in and out along with its gentle rhythms, can be the beginning of the resuscitation process that will lead a suffocating soul back to life.