My male readers saw this title and thought, “Oh, no, chick talk!” Sorry, guys. To make it up to you, here’s a link to pictures of the 10 greatest moments in the NFL. Anyway, quite a few friends who are pregnant with their first children have been asking me about childbirth, so I thought I’d do a post about it to collect all my thoughts in one place. Here we go! 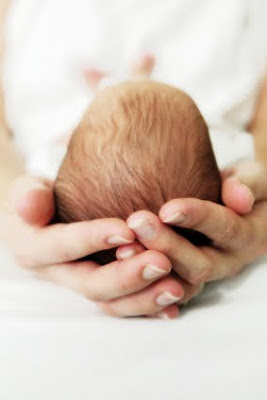 I used to be horrified by the idea of childbirth. In movies and TV shows I’d seen all these depictions of women in labor as screaming, confused and helpless, lying flat on their backs on hospital beds, hooked up to IV tubes, begging their doctors to rescue them from this awful situation. It sounded horrible.

Shortly before I became pregnant with my first child, however, I came across writing from people who boldly claimed that birth does not need to be treated as a medical emergency, that it is a perfectly natural process that typically requires little to no medical intervention. They talked about “empowered birth, ” the idea that it’s better for both mom and baby when women take charge of their own childbirth experience. I pored over great books like The Thinking Woman’s Guide to a Better Birth, Ina May’s Guide to Childbirth, Natural Childbirth the Bradley Way and The Sears’ Birth Book and became not only less fearful but hopeful and even a little excited about the idea of giving birth. I became a walking encyclopedia of statistics about hospitals’ disturbingly high rates of cesarean sections, episiotomies, use of forceps, etc., and I shook my head at how often women were encouraged to get epidurals rather than being given the support to work with their bodies to have a natural birth that would leave them free of the risks and side effects that came with epidurals.

When I found out I was pregnant with my first child I signed up for a Bradley Method class and made an appointment at the local midwife-staffed birthing center. I was going to have one of these empowered births I’d heard so much about.

The birthing center was not in a hospital and had no major medical equipment on-site so going there was basically a homebirth, just at someone else’s home (we lived in a downtown loft that wasn’t exactly the most ideal place for childbirth, otherwise I would have had the baby at my place). When I finally went into labor on a warm September evening, I didn’t have any worries. I’d done so much research on childbirth that I felt like I knew what to expect, and I was happy to be going to the birthing center where the midwives would allow me to be in control of my own birth.

Seventeen hours later, however, I didn’t feel quite so confident. It turned out that the baby was compound presentation, meaning his fist was up against the side of his head, which made labor extremely painful and difficult. None of my Bradley techniques for pain management worked, and the last five hours of labor were excruciating beyond description. When my son was finally born I was so exhausted and stressed that I only vaguely remember those first few hours with him. I went home about four hours after he was born, so tired that I was borderline delusional.

A Change of Plans

When I found out I was pregnant with our second child, I planned to go to the birthing center again. None of the hospitals in our city allowed midwives to have hospital privileges at the time, so a midwife birth in a hospital wasn’t an option. Even if it had been, I doubt I would have considered it. I’d unintentionally fallen into a sort of “us vs. them” mentality when it came to childbirth, and, ironically, in my zeal for empowerment I’d limited my own options by developing a very narrow view of what birth should look like.

But then, a monkeywrench was thrown into my plans.

When I was eight months pregnant I developed a life-threatening blood clot in my right leg called a deep vein thrombosis (DVT). To make matters worse, testing revealed that I have a genetic blood clotting disorder called Factor II which makes pregnancy and birth dangerous for me. Both my midwives and the physician who diagnosed the DVT agreed that I had to have a hospital birth with an obstetrician who specialized in high-risk cases, with additional monitoring by a hematologist. I did my homework on the risks involved and agreed: I’d never be able to have an out-of-hospital birth again.

After the first obstetrician’s appointment I found out that labor would have to be induced in order to manage my blood thinning medications, I’d have to be hooked up to an IV, and I would have to wear special circulation-boosting boots that would keep me tethered to the hospital bed. In other words, I’d be the classic “woman strapped down to hospital bed at the mercy of her doctors.” I started sobbing. I was grateful that my daughter would be OK, but felt angry and frustrated that my dreams for having a natural, empowered birth had basically been flushed down the toilet.

When the big day rolled around it was all overwhelming — I’d just met this doctor, had never even visited this hospital, and I’d been in too much pain from the DVT to research what to expect from a hospital birth. I felt completely helpless. I ended up getting an epidural at the very end of labor because the nurse seemed to think that I would need it, though looking back I think I could have done without it. The overall experience was fine — the doctor and nurses were friendly, and I was happy that the baby and I made it through safely — and I sadly accepted the idea that all that empowered birth stuff just wasn’t an option for me anymore.

Baby number three came along shortly after baby number two, and this time I felt a little more comfortable going to the hospital. I’d gotten to know my doctor better and I knew what to expect this time. I ended up opting to get an epidural, and this time it was without any pressure from anyone. I just wanted it. Once again, in the end I felt that I had missed out on something because it was such a thoroughly “medicalized” birth from beginning to end, and especially because I’d gotten an epidural and therefore given up a lot of control of the process. I had wistful thoughts about being able to go back to the autonomy that came with natural childbirth.

But when I walked into the now-familiar hospital to have baby number four, after making a few jokes about needing one of those frequent customer punchcards (“Have four babies here and the fifth is free!”), something finally clicked. As I relaxed into the hospital bed as the nurses hooked me up to the circulation boots and monitors and an IV, it occurred to me that something was different this time:

I had stopped seeing self-reliance as one of the most important aspects of birth.

One of the things that had come of all my research into natural childbirth is that I’d unconsciously developed an assumption that a key aspect of a good birth experience (after the wellbeing of the baby, of course) was self-reliance. With all talk about women trusting their bodies and being fully in control of their own labors, I had unintentionally fallen into the mentality that ceding control of the birth process to medical professionals in anything other than a serious crisis was always a negative, and that medical intervention except in true emergency situations was always a less-than-ideal outcome. None of the books I read or people I talked to explicitly stated that opinion, and it wasn’t something I’d articulated either; rather, it was a vague, unspoken feeling that had developed in the back of my mind after hearing so many stories of women and babies who had bad birth experiences due to unnecessary medical intervention.

Labor with baby number four, our sweet baby “Joy, “ ended up being my best birth yet, even though not everything went smoothly, I was hooked up to all sorts of tubes and equipment, I requested an epidural, and I didn’t ask a ton of questions about the doctor’s decisions. It was truly empowering, not because I did or didn’t give birth a certain way, but because I finally realized what it’s really all about. After thinking a lot about it, I’ve come to believe that truly empowered birth comes down to these six things:

I think that what made it all click for me was #6. As baby Joy’s due date approached I was increasingly worried about everything that could possibly go wrong, and my reaction was to go into ultra-controlling mode: I had images of haranguing my doctor with tons of questions about every decision he made, launching a campaign with my OB and hematologist to avoid induction, insisting on different monitoring techniques, etc. And then I read this excellent post from Elizabeth Foss where she pointed out that we’re kidding ourselves if we think that we have the power to single-handedly control the outcome of anything, let alone birth. “Sometimes, ” she wrote, “handing over all illusion of control is really a greater skill than learning how to ‘manage’ labor without drugs or ‘manipulate’ the medical community. Sometimes the hardest thing to do is to do nothing — but trust.”

That has been my experience as well. It’s important to feel empowered, in the sense of not feeling helpless or fearful about childbirth, but don’t make the mistake I did and confuse empowerment with total self-reliance. The truth is that you can’t control your way into a good labor, and making a conscious, educated decision to turn over some control to medical professionals or accept a medical intervention that makes things easier on you is just as empowering as having a great all-natural birth. If I’ve learned one thing from having four babies in five years, it is this: Regardless of how or where you have your baby, a good birth experience is going to involve a lot more trust than control.

I’m sure others have some thoughts on this topic as well, so feel free to share. My friends expecting their first babies will be reading and looking for tips!