Eulogy for a friend

The following is a piece that my father wrote for the memorial of his dear friend, astronomer O. Richard Norton, author of the great book Rocks from Space: Meteorites and Meteorite Hunters, who died this past summer. I thought it was so touching that I wanted to share it with you all.

By Don Bishop (my dad) 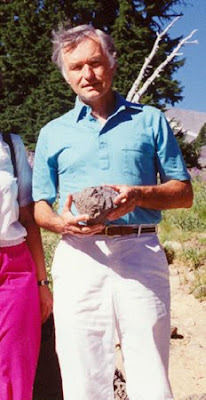 I first met Richard in 1977 when he was teaching an astronomy night class in Tucson. I was in awe of him because he was the first real astronomer I had ever met. Little did I know just how awed I would eventually be. We got to know each other during the class and sometimes I would stay after to discuss or argue a point from the lecture. Richard told me of his slide business, and he needed some pictures of the northern Arizona volcano fields for the geology section. I told him I had an airplane, so when did he want to go. He was excited as only Richard could be.

A couple of weekends later, when my wife and daughter were away visiting family, we took off and headed north. We flew over Sedona so he could get some aerial shots of the red rock area. Finally we reached Sunset Crater and the other volcanoes with their dark lava flows contrasting with the light desert sand. He sat in the back seat to avoid getting the wing strut in the shots and poked his camera out the window over my shoulder. He would holler instructions over the wind noise to bank steeper, get lower, climb higher. Richard was not concerned with the laws of aerodynamic flight, he needed some good shots.

By early afternoon we were done and headed south to Tucson. Back at his house Richard went into the darkroom to develop the film and I went to the store and got steaks and wine. We ate the steaks then went out to the patio and there, as the stars started to appear in the deepening twilight, we finished the wine and talked of stars and galaxies and quasars and the mysteries of the Cosmos. A day of pure magic.

Several months later he needed more pictures. He wanted shots of whole constellations or star groups but needed a guiding telescope atop which he could mount the camera for long exposures. His homemade Newtonian was too big to fit in a car so we loaded my eight-inch Celestron and headed for Kitt Peak. Richard, of course, knew where the gate key was hidden so we drove in and set up the Celestron almost in the starlight shadow of the four-meter telescope that was Kitt Peak’s flagship.

After he would make an exposure, sometimes we needed to wait for another subject to rise higher over the horizon, he would almost shout, “You want to see something really neat?” Without any reference at all he would point the telescope in a new direction. “Wow, would you look at that!” he would say, but I couldn’t “look at that” because he wouldn’t give up the scope. Here was a man who had seen whatever this object was through some of the largest telescopes, yet he was like an excited kid to see it again.

And of course there was Richard being funny without meaning to be. As he got more serious about meteorites and acquired more, he gave me an egg-sized nickel iron that came from Meteor Crater in northern Arizona. I stared at it in amazement. Here was a piece of the 100 foot diameter chunk of iron that came from the interior of an exploding planet, had traveled unknown millions of years and miles to finally impact in Arizona 50, 000 years ago.

Richard said it was called a Canyon Diablo meteorite because it was found west of the crater near Canyon Diablo. In a flash of engineer’s intuitive logic I said, “So that means the meteor came in from the east, impacted and the horizontal momentum carried the ejecta to the west.” I was impressed with myself.

Richard simply said, “No, the west side is where you can collect them without being caught by the Park Service.”

Now that Richard is gone, I realize that I will be missing more than just one of the best friends I ever had. Since the news of Richard’s malady and imminent demise I have spent a lot of time thinking how special and unique he really was. I use the term “magic” a lot regarding Richard, but that’s what he was.

Over the years I have often told my daughter I needed to visit Richard and Dorothy periodically to get my “science fix.” The visit with my wife and daughter some years ago was wonderful. We spoke of fossils and stars and meteorites and they were the perfect hosts. Richard proudly showed me his Martian meteorite. When I was working in Idaho I visited for a long weekend and attended one of the concerts. Sunday morning Richard drove me to the airport in the snow. We said a rather casual goodbye and I got on the plane. Little did I know that would be the last time I ever saw him.

I was looking forward to visiting again when my current project is over, but now that will never be. As Richard drifts away to join his stars, there will never be another time and my life will be sadder for it. But I will never again see a meteor streak across the sky without thinking, “There goes the soul of Richard Norton. He was my friend.”