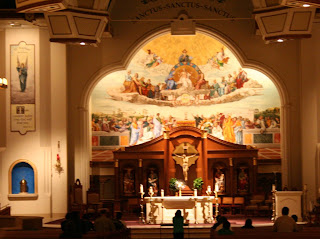 The other weekend my husband went out of town with the three older kids, and I stayed home with the baby. I decided to take the opportunity to tackle pretty much every household project I hadn’t gotten to in the past four years, and ended up staying up until 3:00 AM on Saturday night. When the baby woke up around 7:30 the next morning, I felt like I’d been hit by a truck. My muscles ached from moving furniture and hauling trash bags full of garbage and Goodwill items up and down the stairs all night, and my mind was foggy from so little sleep.

I got her dressed in a daze, and we headed out to go to Mass. As soon as we settled into a pew I got frustrated. I always enjoy picking up the missalette and looking over the Scripture readings ahead of time, but the baby kept grabbing at the pages so I gave up and put it away. I wasn’t up for any deep thought anyway. I sighed and prepared myself to not enjoy the service very much today.

Yet as the Mass started and my physical and mental fatigue prevented me from doing the things I normally do, I began to experience it in an entirely new way.

Normally when the lectors get up to read the first and second readings I have my nose in the missalette and am energetically analyzing the Scriptures from all possible angles to wring from it as much meaning as possible. But this day I simply sat back and listened, absorbing only the most plain truths of the words. Surprisingly, I might have even got more out of it than usual since not having the words printed in front of me kept that noisy overly-analytical part of my brain from kicking into high gear.

When the cantor went up to the lectern to sing the Psalm, I instinctively leaned forward to grab the missalette again. It was actually a small revelation when I realized, “Hey, I can actually just sit back and listen.” Receiving the wisdom of the Psalm only through musical words in the air added a whole new dimension to it, and allowed me to feel it as much as I thought about it.

As the Mass moved on and I was easily able to do everything I needed to do, even while exhausted and having both hands occupied with a squirmy baby, I was overwhelmed with a feeling of being taken care of. I didn’t need to be “on” to get something out of the service; I could be exhausted and frazzled and unable even to hold a missalette and still hear the Word of God proclaimed and renew my covenant with him by receiving the Eucharist.

I marveled at the perfection of the Mass, how God has given us a system for worship that will enrich you regardless of your state of mind: if you’re feeling sharp and energetic you can bring books to help you gain a deeper understanding of each line of Scripture, you can ponder the astounding connections of the Mass to the book of Revelation, and think about the infinite mysteries of the Eucharist; or, if you are tired and weary, if your gifts don’t lie in the area of analytical intelligence, or even if you don’t know how to read, you can still be a part of the Mass as much as anyone else.

Feeling so uncharacteristically tired myself, I began to think of all my sisters in Christ who feel this way all the time. I thought of all the women throughout the world at Mass this day, hearing these same readings, also with babies on their laps, also feeling fatigue down to their bones. I thought of those of them for whom this is not an uncommon feeling, their bodies reeling from working sun-up to sundown seven days a week. I thought of how many of them are illiterate, too busy just trying to survive to get much of an education, never having learned even the most basic reading comprehension skills that I typically employ at each Mass as I study the missalette. And yet, spiritually, they are taken care of too.

As I stood with the baby at the apex of the Mass, the reception of the Eucharist, I was overwhelmed with gratitude for this gift that is as simple as it is profound. You eat God. He becomes part of you in a physical way. The whole concept is stunning and yet so primal, so primitive, that anyone in almost any state can grasp it.

Rarely in my life have I felt so comforted as I did that day at the Mass. I realized that no matter what happens to me, whether I become rich or poor, whether I end up strong and healthy or feeble and frail, at the Mass I will be taken care of. Because the only thing that will ever be required of me to fully participate is simply a love of God.