Seven life-changing lessons I learned in 2009 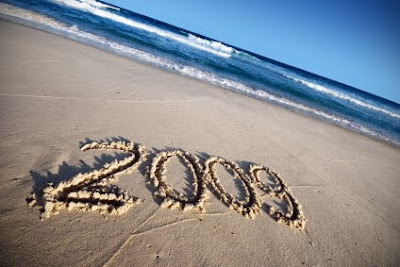 As the new year approaches, I’ve enjoyed looking back on 2009 and thinking about the big things I’ve learned this year:

1. If you want to have a good prayer life, it’s important to take care of yourself physically and mentally

I first wrote about this in late 2008, when I recounted the story of going to meet with my spiritual director to tell her about my slack prayer habits. To my surprise, rather than talking about prayer she wanted to focus on a passing comment I’d made earlier in the conversation when I said I was tired all the time. “Is there anything you can do about that?” she wondered. “Because if you’re really tired it’s going to make it much harder to pray.”

That was a major ah-hah! moment. Based on that realization, I began to take a hard look at the ways in which I wasn’t taking care of myself, which eventually led to me realizing that I had issues with food addiction, that all my previous weight-loss-based attempts at changing my diet boiled down to exchanging one vice (gluttony) for another (vanity), and that what I really needed to learn was detachment.

Needless to say, feeling better by taking care of myself physically wasn’t a magic bullet that made my prayer life perfect, but it did break down a lot of barriers I’d intentionally put up that made focusing on God more difficult than it needed to be, and my prayer life benefited greatly from the results.

2. Breaking out of an “If only!” mindset starts with re-thinking gratitude

As I wrote in my post about escaping from “If Only!” island, I’ve always felt like I was stuck in this vicious cycle of feeling certain that if I just had this widget or that different circumstance that then I’d be fully content…and then I get those things and am still not happy.

As I talked about in that post, it was a huge lesson when I realized that I needed to re-think gratitude in order to break out of that mentality. When thinking about what I was grateful for, I basically got out the “How Comfortable is Jen Today?” meter and started thinking about the material things that brought me pleasure…but, while the meter was out, it left me awfully tempted to dwell on all the things that were inconveniencing me as well. By learning to change my focus to spend more time thinking about God’s love in my life and less time thinking about stuff and comfort, I’ve been able to make huge strides in feeling content with my life as-is, and am slowly breaking away from “If Only!” Island.

I should add, since I saw from comments and emails that I don’t think I communicated this well the first time, that I am not at all suggesting that it’s bad to be grateful for material things. (I know Ann Voskamp’s “Thousand Gifts” posts are constant source of inspiration for me, and she frequently lists life’s simple pleasures.) My lesson was not that I should never feel grateful for soft sheets or air conditioner in the summer, but that I should always remember that those things are not the true source of my happiness.

3. When you trust God, it actually like works out and stuff

Regular readers know that trusting God on a moment-to-moment basis is not something I’m good at. At all. Nevertheless, I am always trying to control less and trust more, even if it’s usually a process of taking two steps forward, one step back. Ever since reading 10 Prayers God Always Says Yes To, where author Anthony DeStefano emphasizes that God can bring good out of any situation, I’d been inspired to focus on trusting God fully at each moment, worrying less about whether any given situation was due to God’s direct will or my stupidity or randomness or whatever, and just turning to him and saying, “I trust that you’ll use this situation for good. What do I do next?”

There have been countless examples of seeing the wisdom of this lesson in action, but the biggest one was with the book and the unplanned pregnancy:

In the summer of 2008 I signed a contract with an agent to write a book about my conversion from atheism to Christianity. A book deal! What a dream come true! With three kids under four it was hard to find time to write, so I began a rigorous schedule of getting up two hours before the kids each morning to have writing time. Then I was floored to find out that I was unexpectedly pregnant with another high-risk pregnancy. In addition to concerns about having four children under age five, pregnancy fatigue meant that I could no longer get up early, and my writing schedule was demolished. In fact, it was clear that it was now going to take more than double the time I’d originally set to finish it.

For a long time I felt upset, worrying that my demolished timeline and the chaos of so many kids would mean that my dream would turn to smoke, but I grudgingly decided to trust that God would bring good out of it. Of course when the baby got here I got a clue and realized what a tremendous blessing she was and how privileged we all were to have her as part of the family, but even in terms of the book, I began to see how the whole situation worked for good.

The first draft was not that good, but I hadn’t seen that at the time. Had I had the energy to power through it as I’d originally intended, I am certain that I would have polished up that first draft and sent it off to my agent in my zeal to see the book deal come to life. Being forced to slow down gave me the time to get a better perspective on it and see that it had some fundamental flaws, and having worked on turning the whole thing over to God gave me the grace to make the very painful decision that, after a year of work, I needed to rewrite it from scratch. Now that I’m working on the rewrite and have an unbelievably precious and sweet 10-month-old daughter, I am overwhelmed with gratitude that my original plans got derailed.

Whether it’s with unplanned pregnancies, writing books, getting locked out of Adoration chapels or mistakenly getting fries instead of onion rings, I’ve learned over and over again through life’s little daily struggles this year that trusting God really does work out.

4. Kids behave better in church without snacks or toys

I was skeptical, but after reading a lot of the great advice in the comments to this post about getting kids to behave in church, I decided to try not bringing toys or snacks when we took our four young children to church with us. The results? It was a humiliating endeavor reminiscent of a pay-per-view WWF special that ended with my dragging one kid screaming out of church while the other clung to my leg and my husband bounced a baby on his lap in the cry room while trying to keep another child from tearing up the missalettes…but a big improvement from the times we brought snacks or toys! Normally on top of all that we had the kids arguing with one another about what we’d brought to amuse them, and they really didn’t seem to miss it. It’s made Mass much easier to manage (by our standards, anyway) without those extra steps and distractions.

I also realized, based on the comments to that post, that the best way to get kids to behave in church is to just jump in: start bringing them every Sunday, also to daily Mass too if you can swing it, and they’ll slowly but surely start to show improvements.

5. You can’t show Christ to people if you’re expecting them to fill you up

So many times since my conversion I would go to some event and think, “I am just going to shower these people with the love of God!” And then I’d walk into the event, see a couple people give me stares that I interpreted as not being friendly, and immediately slam the “Show God’s Love” lever down from the “on” to “off” position.

As I discussed in this post, I realized that the problem was that I was expecting them — not the Holy Spirit — to fill me up. And as long as you’re deriving your strength from other people, you’re not free to show them real love.

6. The root of stress is usually fear

As I waited nervously for the baby’s arrival early this year, wondering if I could possibly handle it all, I spent a lot of time thinking about stress. It had seemed like my daily stress came from a thousand difference sources, but when I really looked into it I found that it almost always came down to one thing: fear.

During Lent I committed to taking a one-day-at-a-time approach to working on this by simply trying to make each day “a day without fear.” I found that learning to let go of fear in the little stressors of daily life — traffic jams when I’m in a hurry, kids waking up at night, plans that go awry — was surprisingly difficult, and yet surprisingly fruitful. It made me turn to God on a moment-to-moment basis like I’d never had to before, improved my discernment process, and lifted so much anxiety off of my shoulders by simply trying to let go of fear.

7. You never, ever want to mess around with the poop fates

Before this year, I had only vague awareness of a mysterious law of the universe that says that if you laugh at another parent’s poop-related misfortune, the wrath of the poop fates will soon come down upon you. Then I laughed at a post in which another blogger had an embarrassing situation with a potty-training toddler, and soon I understood. The poop fates evidently weren’t finished, however, since it got all The Ring up in here when a couple of commenters who chuckled at my post reported back after putting away the rubber gloves and Lysol that it came back to haunt them, and Melanie Bettinelli experienced something similar as well. As 2010 approaches and I reflect on 2009 and ponder the new year, I think my biggest goal is simply to not mess around with the poop fates.

What were your biggest lessons in 2009?

« Merry Christmas!
"You pray before battle" »