"You pray before battle" 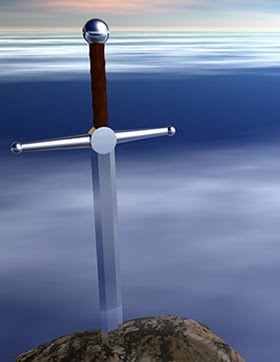 Last week I was praying about how I’m bad at praying. (I use the word “praying” loosely here; “whining in God’s general direction” would be a better term.) I was walking around as I cleaned up the kitchen after dinner, half-consciously thinking stuff like, “I dunno, I do try pray, but I always get distracted, or I forget, or I just don’t feel like it. Actually, let’s be real, it’s usually that I just don’t feel like it…”

I try to “pray without ceasing, ” turning to God regularly as I go about my days, but lately I’d been increasingly apathetic about having any kind of set prayer time where I give God 100% of my attention. Even though I recognized that when I pray the Liturgy of the Hours it helps me on every level, even when I tried setting simpler goals like just focusing on freeform prayer for five minutes per day, it still wasn’t happening. And so I found myself whining about it in the kitchen one night last week.

And, to my surprise, I got an answer.

In the midst of my unfocused rambling, a loud message interrupted all my other thoughts and got my full attention. I guess it could have been from my subconscious, but it really seemed like one of those moments of “hearing” God since it came out of the blue and was so foreign to all my other thoughts. It said:

You pray before battle.

What? I wasn’t even sure what that meant. I responded prayerfully: “Huh?”

I heard it again. As I rinsed dishes and swept the floor, I thought about what that meant in relation to my struggles with prayer. Then I realized:

If I were going into battle tomorrow — a real battle, facing bloodshed and mortal danger — I would pray. I wouldn’t have to remind myself why it’s important. I wouldn’t whine about it. I wouldn’t drag my feet. And I dang sure wouldn’t forget.

In fact, if I were doing anything of great importance, I would naturally turn to prayer. Let’s say, for example, that Oprah invited me on her show to make the case for orthodox Christianity, or that I had a chance to meet with an influential politician to talk to him or her about an issue that’s important to me. Not only would I not forget to pray beforehand, but you’d hardly be able to get me to do anything else.

A big problem with my prayer life is that I’d stopped feeling like I do anything important on a day-to-day basis. Now, I’ve always known that my job is the most important job in the world; I’ve never doubted that my role as a mother is critical in the grand scheme of things. But on the average day? Hmm. Not so much.

Somewhere along the way my attitude had become saturated with ennui, and I came to see my days as consisting of “make breakfast, ” “clean up after breakfast, ” “try to keep the house from getting destroyed between breakfast and lunch, ” “make lunch, ” and so on. Not very exciting. I’d made the dangerous mistake of forgetting that every day is a battle, a war of good against evil, that every time I choose love instead of sin it’s a victory on a cosmic level that I can’t imagine. There are always opportunities to step out of my comfort zone in trust in God, to serve in ways I’ve never served before, to bless other people with the love of God — and that’s on days when I don’t leave the house! It’s a vicious cycle, really: the more I skip prayer and lose touch with God, the more I forget that the Christian life is always the exciting life, regardless of your external circumstances.

As the new year rolls around, I think that one of my biggest goals is simply to break out of this lackadaisical approach to daily life and renew my understanding that every day really is an opportunity to fight a glorious battle. Anyone have any advice?