A word for the year 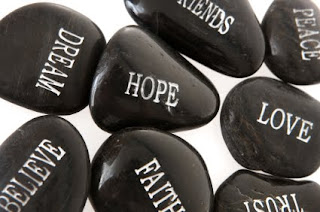 When I first heard about the concept of having a “word of the year, “ choosing a single word to meditate on and set your goals around for the whole year, I wasn’t sure it was for me.

“Here’s the problem, ” I told a friend. “Ann Voskamp’s word is YES, Rachel Balducci and Arwen Mosher are both doing JOY…I feel like holy people like that can do this sort of thing, but I’m too much of an overly analytical grouch for it.” I thought that if, say, I were going to try to be more joyful, I would need specific, measurable goals in that department, lest I end up just rolling my eyes at the “JOY!” sign posted on my refrigerator as I shuffle around joylessly.

(Later I emailed that same friend with a wry note saying that I had finally chosen a word, and it was sesquipedalian. Without missing a beat, she replied that hers was floccinaucinihilipilification.)

I thought I’d given up on the concept, but then I came across a passage in the fantastic In Conversation With God book of daily meditations, and it hit me that I need a word, and I knew exactly what it was. The problem wasn’t that the concept didn’t work for me, it was just that I hadn’t found the right word. But I got it when I read:

Fortitude in our ordinary life

We have to [pray] to be strong, not only in difficult circumstances which are out of the ordinary, such as persecution, martyrdom, or a serious and painful illness, but also in the normal events of each day: being constant in our work, smiling when we don’t feel like it, or having an affectionate, pleasing word for everyone.

We need fortitude in order not to give way when we are tired, or feel lazy, or don’t want to be bothered. We need it too, to overcome our fear of fulfilling difficult duties, etc. “By nature man fears danger, discomfort, suffering, ” [John Paul II wrote]. “Therefore it is necessary to seek brave men not only on the battlefield, but also in hospital wards, or by the sick bed of those in pain, ” in the ordinary tasks of everyday life.

An important part of this virtue of fortitude is the interior firmness to overcome more subtle obstacles such as vanity, impatience, diffidence and human respect. Other manifestations of fortitude are self-forgetfulness, and not thinking too much about personal problems…

This virtue has many manifestations in the apostolate — speaking about God without being afraid of what people will say, or what they will think of one; always acting in a Christian way, even though this clashes with a paganized atmosphere; running the risk of taking the initiative to reach more people, and making the effort to put these initiatives into practice.

Mothers frequently have to practice fortitude discreetly and normally in a pleasant, patient way. They will then be the solid rock on which the whole house rests.

And that’s when I knew that I had my word for the year: FORTITUDE.

If you were to choose a word for this year, what would it be?