How the Superbowl reminded me why I love Lent

Yaya is here and I’m taking some extra time to work on the book, so here’s something I wrote a while back that I’ve been thinking about lately. It was originally published on February 4, 2008. 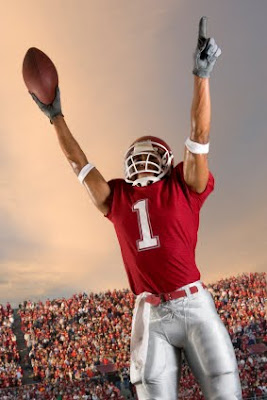 This weekend I heard a guy on television talking about Tom Brady’s amazing life: he’s a handsome star NFL quarterback who was on track to have an undefeated season (this was before the game, obviously), not to mention the fact that he’s dating the beautiful Victoria’s Secret model Giselle.

The guy on television talked about how unfathomably amazing Brady’s life would be if the Patriots won the Super Bowl. He stared in wonder for a moment as he reflected on this concept. You could practically see the wheels in his mind turning as he pictured walking off the football field from an undefeated season in the NFL, feeling the rain of confetti, hearing the cheers of screaming fans, heading off to spend the evening with his hot celebrity model girlfriend. Clearly, this scenario represented the very pinnacle of the human experience for this man.

Being too tired to do anything more mentally productive, I took a moment to try to think of what my version of a big Super Bowl win would be. I thought back to the days when my life revolved around pursuing things like status and money and comfort, and thought about what it would have been like if I’d achieved more success in that area than I could have ever dreamed.

One result of this thought exercise is that I realized that my dreams were really nerdy (the best I could come up with was imagining my picture on the cover of Forbes where it was announced that Google and Microsoft were in a ruthless public bidding war over some amazing software I wrote). The most interesting result, though, was that I knew exactly how I would have felt if I had achieved all of my worldly ambitions: excited, prideful, honored…and a little bit depressed.

I’d forgotten about this until now, but up until a few years ago, almost every time something exciting or good happened I would feel a tinge of depression. No matter how great or exciting the situation, for some reason I could never quite feel fully happy about it. Just as my happiness would be about to reach a crescendo, something would make it fall flat, like when a singer just barely misses the high note. I didn’t generally struggle with depression in this time in my life; it was just that, for some odd reason, whenever something particularly good occurred, it would trigger a vague sensation of despair somewhere deep down inside. I didn’t understand why this happened. My best guess was that maybe I had some problem with not feeling like I deserved good things, or that I had some issue with depression that I wasn’t acknowledging.

Though those two things may have been factors, I don’t think they were at the root of the problem. Thinking back on it today, it’s clear that something else, a very real, inconvenient truth was there in the back of my mind when I got that promotion, deposited the big paycheck, bought the cool car, moved into the downtown loft, got that amazing Christmas present, traveled to the interesting places, went to the hip parties, landed a big client:

This is as good as it gets…but it’s not quite good enough.

The fun wasn’t fun enough, the luxuries weren’t luxurious enough, the excitement wasn’t exciting enough to completely smother out that part of my soul that begged for something more. It wasn’t that I wasn’t grateful — to the contrary, I regularly felt overwhelmed with gratitude for all the wonderful things in my life — it’s that there was a subtle but present sense of despair that these things weren’t doing what they were supposed to do. I was kind of happy. But why wasn’t I fully happy, why wasn’t I completely at peace, why was I still a little bit restless, even when I technically had it all?

Christians used to ask me: “Don’t you feel like there’s something missing?” To which I would respond by rolling my eyes. In my worldview, the only things humans could possibly need or want were the goals that our species had evolved to need and want, and as long as I had those things or felt certain that I could attain them (which I did), nothing could be missing from my life. I continued to pursue happiness from the possibilities given to me by the material world alone. At some point I came to the realization that the best the world has to offer was probably never going to be good enough; that achieving my wildest dreams , even my own personal version of a Super Bowl win, would make me happy to a certain extent…but not fully. It was a bitter realization.

This is why I love Lent.

For me, Lent is a reminder that what I once thought was the worst news in the world — that there is nothing in the material universe that was going to bring me the deep happiness I craved — is actually the best news in the world. To give up worldly pleasures during Lent, things that I once built my life around pursuing, is to put them in their proper place; to disentangle my hopes and dreams from things and fleeting accomplishments; to set my sights much higher.

Lent reminds me to have a healthy amount of awe for one of the greatest mysteries ever seen: that the human animal, who should know of nothing other than the material world at hand, has from the beginning held on to this perplexing notion that what he needs and wants cannot be found in the only world he’s ever seen. Almost every culture throughout history, separated by time and space, has come up with this idea. I always wrote that off when I was an atheist, assuming that people just needed stories about fantasy worlds to make themselves feel better. But now that I have discovered God’s existence, I get it. This idea won’t die because the thirst we feel deep in our souls is real, and the material world offers us only saltwater to quench it. Looking outside the material world, finding God, is to finally find the pure water that fully satisfies the aching thirst.

Lent reminds me not that all the status and comforts and possessions I’ve pursued are necessarily bad, but that there is Something infinitely better. To quote C.S. Lewis: “All that we call human history — money, poverty, ambition, war, prostitution, classes, empires, slavery — [is] the long terrible story of man trying to find something other than God which will make him happy.”