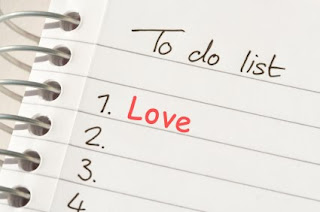 A few months ago I attended a “How to be a More Loving Christian” seminar at our parish. (That’s not exactly what it was called, but that’s the basic gist of it.) It was a meal, followed by a talk, then some discussion.

Before I got in line to get food from the buffet, I looked for a place to set down my purse and notepad to reserve seats for my husband and myself. I scanned the room. All the tables were over half full, except for one that had plenty of seats available. I started in that direction, but stopped when I saw who was sitting there.

Alone at the table was a man with a very disheveled appearance, so much so that I thought he might be homeless. Without thinking through it all that much, I turned and set my stuff down at another table with more, ah, appealing-looking people.

I got in line for food, but as I stood there, my decision began to gnaw at me. I looked over at the man sitting alone at the table, thought about what I did, and realized:

I did it. I did that thing I said I’d never do.

Back at the beginning of my conversion, when I was starting to visit churches for the first time in my life, one of the things that always puzzled me was when Christians would be rude to each other in the parking lots after the service. I didn’t see it often, but when I did I was utterly perplexed. Sure, I understood that even devout Christians aren’t going to be able to be perfectly loving 100% of the time…but couldn’t they at least wait until they were off the church premises?!

“I don’t get it, ” I told my husband after seeing a lady honk and make an angry gesture at another car while trying to get out of a church parking lot. “Do they secretly not believe the ‘Gospel’ stuff that they talk about in church? Or they don’t interpret Jesus’ command to love your neighbor literally?”

My husband didn’t seem all that surprised by it, but I thought it was a shocking level of hypocrisy. I told myself that if I were to get involved with this religion, I’d never be that person. I might not be perfect, but I wouldn’t have such a deep disconnect from my beliefs and my actions that I couldn’t remember it for 15 minutes after church.

Yet there I was, on the church grounds, opting out of an opportunity to show love to a lonely person because I had — to put it bluntly — deemed him “undesirable.” The weight of the irony got even more crushing when I considered that the topic of the talk was “How to be a More Loving Christian.”

I planned to remedy my mistake, but luckily my fellow parishioners are not the spiritual trolls that I am; by the time I got through the food line there wasn’t a seat left at the man’s table, and a couple young men were involved in an animated discussion with him.

When I got home that night, I spent a lot of time thinking about how that had happened. How had I fallen into such an obvious, glaring disconnect between my beliefs and my actions, especially since I had specifically promised myself that I’d never do that? It didn’t take much deep thought to realize:

I had planned to do something other than love.

You see, I had plans for that night. Important ones! There were a few semi-urgent things that my husband and I needed to talk about, and with all the chaos at the house we hadn’t had a chance to catch up in a few days. I had planned to use the mealtime and other breaks at the seminar for us to chat. When I saw the man in the bedraggled clothes and uncombed hair at the table, I worried that his behavior might be unpredictable (was he mentally ill? maybe just quirky? how would he interact with us?) and I didn’t want to endanger my chat with my husband. It all happened in a split-second of subconscious thought, but that was my reasoning.

Thinking of the parking lot example, I realized that, now that the newness of my beliefs have worn off, I too have been guilty of somewhat rude behavior (and very rude thoughts) while trying to get home from Mass. And it’s always because of plans. We need to hurry home for the kids’ naps, to turn off the sprinklers, to make it to the takeout place before they stop serving breakfast, and so on. There’s always a “good reason.”

Obviously, planning your day is a good thing to do. Having goals and a list of what I want to accomplish each day is super important for keeping me motivated and (somewhat) organized. But as I thought back on that evening at the seminar and all the other examples of my actions not backing up what I claim to believe, I realized that making those things my highest priority directly leads to unintentionally hypocritical behavior — because all too often, I’m faced with a choice between getting done what I wanted to do or treating another human being with kindness, and I can’t do both.

One of the things I’ve been trying to do in light of this realization is to look at my daily to-do lists in a new way. I’m trying to find that balance between being motivated about getting things done, yet having my number one plan be simply to take every opportunity to love.