To seek God is to seek love 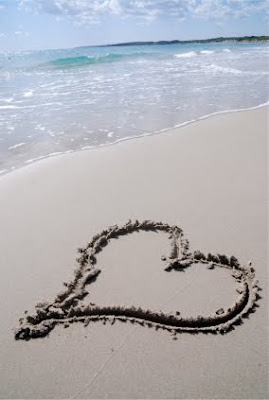 Growing up in the Bible Belt, I was frequently exposed to the expression “God is Love.” I saw it on t-shirts, bumper stickers and the occasional Precious Moments figurine, and figured that I pretty much knew what it meant: it was a shorthand way of describing one of God’s characteristics, i.e. “God (that Guy we believe in who’s kind of like a dad, only nicer) is love (meaning he’s really, really, really loving).” Right?

It is only recently that I realized that I had it wrong. One of the biggest lessons I learned in the conversion process, maybe the biggest lesson I learned in my life, was that the phrase “God is Love” is meant to be taken literally: God is love. God = Love. It’s not just some characteristic, but his essence. To paraphrase the Cynical Christian’s recent post on a similar subject, when we say “God is love, ” we’re not describing what God is, we’re describing what love is — love is God.

I’ve been thinking about this a lot lately, how this understanding of God and love played such a key role in my conversion. It brings light to three issues in particular that would sometimes perplex me as I walked the long path from atheism to belief:

1. It explains the importance of humility.

When I first began to explore the possibility of God’s existence, I approached the endeavor the way one might approach proving that something in the material world exists: I put God under the microscope, so to speak, waiting with arms folded across my chest until proof of his existence was presented to me. Occasionally I would read something about the importance of humility, which I took to mean that one should be open to new data. So I’d make a mental note to make sure that I wasn’t closing my mind to any sort of proof God might offer me, and promptly return to sitting and waiting with my arms folded across my chest.

This approach made sense since I thought I was seeking an abstract theoretical concept called “God, ” and saw myself as involved in a process that should require nothing on my part other than observation of data. Yet I couldn’t seem to escape this concept of humility — and the more I read, the more I realized that all these great Christian thinkers were talking about something much more than just admitting that you don’t have all the answers. They were talking about embracing radical, self-abandoning humility. I didn’t get it. Did these people have hang-ups or something? Why were they so determined to believe that you had to be humble yourself before you could seek God?

Now that I realize that I was seeking not an impersonal theoretical concept but love, Love itself, it makes sense. I won’t get in over my head by trying to fully explain the Christian virtue of humility and get into all the reasons it’s important; suffice it to say that I came to see a close connection between love and humility. Even in human relationships, I realized, one does not find love by starting with an overly skeptical, “prove it!” sort of attitude. Love is not something that can be dissected under a microscope; to find it requires emotional involvement on the part of the seeker, a willingness to investigate with the heart in addition to the coldly rational part of the mind. It requires a questioning mind, and a humble heart.

Which brings me to the next thing I realized…

2. It explains why it took me so long to “feel” God’s presence.

As anyone who’s glanced through the archives to this blog knows, I never used to “feel” God’s presence. I eventually came to believe in his existence on an intellectual level, but was disappointed that I didn’t feel much on an emotional level. It always seemed like I was talking to myself in prayer, and I often felt a bit jealous that other people seemed to “know” God in a way that I did not.

Part of that might have been due to the normal spiritual dryness that most people experience at some point or another, and part is surely because I’m not a very “touchy feely” type of person. But there was another factor as well, possibly the biggest factor: I didn’t understand that God is Love. Once I realized that you could replace the word “God” with the word “Love” in almost any instance, the problem behind a lot of my spiritual struggles became clear. For example:

When I considered the statements on the left side of the equations, each sounded like a nebulous, intellectually difficult endeavor that would require lots of passive contemplation from an armchair; but when I considered the statements on the right side, each sounded like an exciting, intriguing endeavor that would require the active participation of my mind, heart and soul. I might not have felt like I knew much about experiencing God, but I did know a thing or two about experiencing love: I knew that you don’t fall in love by reading about it in books. You don’t increase the amount of love in your life by sitting back and waiting for others to make the first move.

3. It explains why I now believe in God with all my heart.

In his conversion story, former atheist John C. Wright likened coming to know God to falling in love. He writes: “It was like falling in love. If you have not been in love, I cannot explain it. If you have, you will raise a glass with me in toast.” I can’t think of a better summary of what I’ve experienced.

Back when I wrote my original conversion story I talked a lot about how much more sense the world made to me after seeing it through the lens of Christian teaching. The profound changes I saw based on that understanding alone were enough to convince me that Christianity spoke the truth about God and the world. But in the year and a half since I typed that up, something else has happened as well: my life has been infiltrated by Love. A real, external, palpable force of love has entered my life, a distinct presence that wasn’t there before. I don’t mean that I just feel happy more often or that I try to be more loving towards others or that I think nice thoughts more than I used to (though all that is true), but that the very Source of those things is now involved, and it’s not coming from within me.

I used to think I’d always have doubts about God’s existence. I’d been too atheistic in my beliefs for too long, so it would be too much of a change to think in terms of the supernatural. What I didn’t anticipate when I made that prediction, however, is that I would find Love. This Love that has ever so slowly become the center of my life is more powerful than anything I’ve ever known, and to doubt its existence would be to doubt reality.

I could have probably come to deep, unhesitating belief in God much sooner if I’d understood from the beginning that by seeking God, I was ultimately seeking Love.

« The Saturday Evening (Blog) Post
Encouragement for parents in the trenches? »