Maybe it was the music 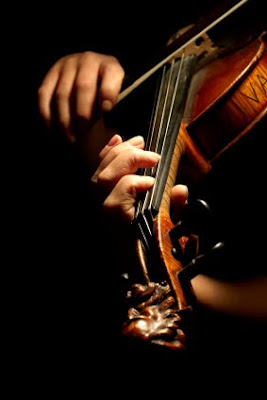 One day last year I told an atheist acquaintance that I’d cried at Mass that morning. It was one of those times that I just felt overwhelmed with the presence of God, I explained. I was so perfectly at peace, so surrounded by love that I couldn’t help but be moved to tears.

“Maybe it was the music, ” he responded. He went on to offer an erudite analysis of how music is known to produce certain positive sensations in the brain, noting that religious leaders from time immemorial have used the evolved human response to the stimulus of music as a way to delude the faithful into believing that they’ve experience the divine.

I had to smile at his suggestion, because I actually agreed with part of his argument.

I’ve mentioned before that I never had a “religious experience” before my conversion (and, in fact, not until well after I considered myself a Christian). I couldn’t even imagine what that might be like. Do harp-playing angels appear in front of you? Or do you hear a booming voice in your head? I had no idea.

There had been a handful of moments in my life, however, when I experienced something that was unlike anything else I’d ever felt. Every now and then — no more than once or twice a year — I’d feel overcome with this odd sensation, this ecstatic elation on top of inner stillness that was so powerful that it made me feel as if I’d dipped my head into some other dimension. It was a moment of feeling compelled to relax, to let go, to just trust (trust in what or whom I didn’t know, but that was definitely an overriding feeling when I had those experiences). Those moments were…well, if I hadn’t been so certain that nothing existed beyond the material world, I might have said “spiritual.” And they always occurred when I was listening to music.

It seemed kind of illogical, really, that a mere arrangement of certain sounds in a certain order could transport me, for however brief a moment, into such a sublime state. I was aware of all the natural explanations for music’s impact on the human brain; yet when I’d read about how the cochlea transmits information along the auditory nerve as neural discharges into the auditory cortex in the temporal lobe, I’d think, “Uhh, yeah, that’s true…but I feel like there’s something more going on as well.”

One of the many things that rang true when I began studying Catholic theology was the emphasis on art — music, in particular — as a reflection of God. As I said in another post, I came to see art as a secret handshake of beings with souls: we share 96% of our DNA with chimps, but chimps don’t write symphonies. Dogs don’t rap. Dolphins can be trained to reproduce musical rhythms, but they don’t sing songs. Only the creature made in the image and likeness of God can speak the secret language of music.

In other words, I realized that all those experiences I’d had while listening to music were so tremendous because they were experiences of my soul having a brush with its Creator.

The encounter with the beautiful can become the wound of the arrow that strikes the heart and in this way opens our eyes, so that later, from this experience, we take the criteria for judgment and can correctly evaluate the arguments. For me an unforgettable experience was the Bach concert that Leonard Bernstein conducted in Munich after the sudden death of Karl Richter. I was sitting next to the Lutheran Bishop Hanselmann. When the last note of one of the great Thomas-Kantor-Cantatas triumphantly faded away, we looked at each other spontaneously and right then we said:

“Anyone who has heard this, knows that the faith is true.”

The music had such an extraordinary force of reality that we realized, no longer by deduction, but by the impact on our hearts, that it could not have originated from nothingness, but could only have come to be through the power of the Truth that became real in the composer’s inspiration.

Christianity doesn’t deny that beautiful music can move us to feel something; in fact, it acknowledges it and then takes it a step farther by articulating exactly what it is we’re feeling. And that’s why I smiled when I heard my atheist friend’s comment. It is actually because I am a Christian that I take that moment at Mass when I became filled with so much love and hope that I felt like I could explode with joy, and I say: Yes, maybe it was the music.