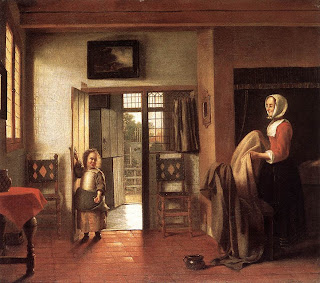 I woke up at four o’clock this morning and couldn’t go back to sleep. As a the biggest non-morning-person in the world, this was an unusual occurrence.

After an hour I finally just got up — I figured I might as well get something done if I was going to be awake. I walked downstairs, feeling groggy and a little down. I was too tired to be very productive, yet not tired enough to go back to sleep. On top of that, I had a bunch of things I wanted to get done today, and now worried that I wouldn’t have the energy to accomplish them all.

I drifted into my office, flipped on the light, and prepared to sit in front of my computer. But just before I sat down, a book caught my attention. Francis de Sales, Jane de Chantal: Letters of Spiritual Direction seemed to jump out at me as if it had a spotlight on it. It was weird because I’d never noticed it before. I don’t even know where I got it.

Anyway, Francis de Sales and I go way back (all my posts on how his wisdom has impacted my life are here). As soon as I saw the book I knew that I was meant to pick it up, and that the first page I turned to would have something awesome for me. I don’t know whether that was the Holy Spirit or just the fact that de Sales has never written a paragraph that wasn’t fascinating; either way, it worked. I opened it to a random page, and my eyes immediately fell on this part of a letter that he wrote to one of the women who’d asked him for spiritual advice:

Soon we shall be in eternity and then we shall see how insignificant our worldly preoccupations were and how little it mattered whether some things got done or not; however, right now we rush about as if they were all-important. When we were little children how eagerly we used to gather pieces of broken tile, little sticks, and mud with which to build houses and other tiny buildings, and if someone knocked them over, how heartbroken we were and how we cried! But now we understand that these things really didn’t amount to much. One day it will be like this for us in heaven when we shall see that some of the things we clung to on earth were only childish attachments.

I’m not suggesting that we shouldn’t care about these little games and trifling details of life, for God wants us to practice on them in this world; but I would like to see us not so strained and frantic in our concern about them. Let’s play our childish games since we are children; but at the same time, let’s not take them too seriously. And if someone wrecks our little houses or projects, let’s not get too upset, because when night falls and we have to go indoors — I’m speaking of our death — all those little houses will be useless; we shall have to go into our Father’s house. Do faithfully all the things you have to do, but be aware that what matters most is your salvation and the fulfillment of that salvation through true devotion.

After I read that passage, I flipped through the book. I was charmed by all the letters, written by both Francis de Sales and Jane de Chantal (Francis was Jane’s spiritual director, and she went on to be a spiritual director herself). The letters collected in the book offer wisdom and encouragement for the little concerns of daily life: one shares advice on how to pray during the exhaustion of pregnancy, another with how to respond to unkind behavior by friends. They also discuss deep suffering; three of Jane de Chantal’s children died, and her beloved husband was killed in a tragic accident on the day she gave birth to their last child, when she was only 28.

In one letter Francis de Sales commented that he was writing these words before dawn. As I sat at my own desk in the pre-dawn stillness, I felt dizzied by the fact that his words that I could relate to so well, that sounded like something straight out of my own life, were written 400 years ago.

His advice in that first excerpt became even more powerful when I considered the four centuries that separated us. It’s one thing for someone who’s currently living to remind you that earthly accomplishments are fleeting; it’s another to read it from someone who lived so long ago, where you can look back across the timeline of world history and see that they were indeed just players, and the story belonged to God all along.

It was illuminating to consider how my own life might look from such a distance. I imagined a journal entry I might write that morning if I were to do a brain dump of all that was on my mind:

April 27, 2010
Woke up earlier than I wanted to. Ugh! Worried that I’ll be super tired all day. Have been feeling a little stressed about getting those screens on our windows fixed. Also, I’m annoyed by a note I received the other day that had some really unkind criticisms of something I wrote — just wait until I set him straight in my reply! Plus, I need to sign my son up for sports, and should probably get the girls some kind of lessons as well. Really wanted to write something today. It’s going to be so annoying if I don’t have time.

It was interesting to imagine that same note, but reading it from a distance of 400 years. I pictured this:

April 27, 1610
Woke up earlier than I wanted to. Ugh! Worried that I’ll be super tired all day. Have been feeling a little stressed about getting those screens on our windows fixed. Also, I’m annoyed by a note I received the other day that had some really unkind criticisms of something I wrote — just wait until I set him straight in my reply! Plus, I need to sign my son up for sports, and should probably get the girls some kind of lessons as well. Really wanted to write something today. It’s going to be so annoying if I don’t have time.

That thought exercise was a real thunder-and-lightning moment for me. It made me want to shout to the woman writing in 1610, “Dude, reprioritize! Don’t put so much energy into trivial stuff!” As Francis de Sales points out, it’s not that those little worries of life don’t matter at all — obviously, we have to attend to the duties in front of us — but that we should always strive to keep them in perspective. In the end, they’re not nearly as important as how much we loved, i.e. how well we served God.

Francis and Jane have both been dead for four centuries. I say “dead” as a shorthand for their departure from earthly life — I believe that they’re very much alive, and still interacting with this world. In fact, it was probably their prayers that guided me to that book this morning. (The saints have certainly made bold moves in my life before, as I recounted here and here). As I read through their letters in the darkness of my office at five o’clock this morning, my mind flashed through all the history that has played out in the hundreds of years since they wrote those words, and I could imagine them whispering to me: Eternity is a whole lot longer than a handful of decades on earth. Prioritize accordingly.

I wouldn’t be giving you the full picture if I didn’t offer this update:

My day ended up being a disaster. Normally I get an hour or so of down time in the afternoons when the kids have nap/quiet time, but today all four of the kids opted for “screaming time” instead. When a bowl full of freshly-chopped cantaloupe got shattered on the kitchen floor, I ended up placing one of those “bad day melodrama” phone calls to my husband, where I screeched a litany of everything that had gone wrong that afternoon, ending by noting through gritted teeth that it was exasperating that I couldn’t finish the one simple thing I’d been working on.

“What was it?” my husband asked.

I paused. “It was, umm, a blog post about how we shouldn’t freak out about small problems.”

So, yeah: easier said than done.