In memory of a lost cat 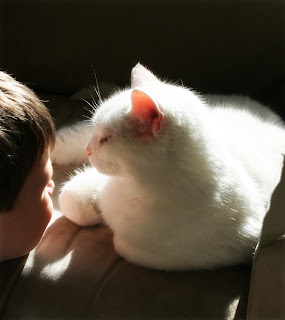 Our cat is gone. We have no idea what happened to her: animal control and the local pounds don’t have her, and the neighbors haven’t seen her recently either. She simply disappeared.

We didn’t exactly sign up to be cat owners. She belonged to the ex-wife of the house’s previous owner, and we were under the impression that he would take her to the pound before we moved in if we didn’t want her. My husband is allergic to cats and we were expecting our third baby in three years at the time, so we weren’t exactly looking for another little mammal to keep alive; but she was an outdoor cat and very friendly, so we agreed that she could stay.

I hadn’t realized how much I associated her with my religious conversion until she was gone: we moved into this house the night of my first confession during Lent 2007. The fluffy, all-white cat was there, out in her kitty bed on the back porch, looking on through the window as I stood in the kitchen among moving boxes and told my husband all about the amazing experience I’d had.

It was thanks to her throwing up on our carpet that I first learned what it means to die to self, and the surprising story of her ownership history taught me a lesson about “little” sins that I’ll never forget. She helped me learn how to grow in faith despite the imperfections of life, such as the morning that I was praying Lauds as part of my reckless experiment with prayer, standing at the back door and soaking in the glow of the morning sun, only to glance down from my prayer book and see a decapitated squirrel that the cat had left at our doorstep. (I will note, though, that her tendency to drop these little gifts was balanced by the fact that she helped out with the whole terrifying scorpion infestation thing.)

We never did decide on a name. The previous owner named her Emma. My then-three-year-old son came up with White House, presumably inspired by the color of her fur. The neighbor girls called her Snowball. Yaya named her Possum, a humorous nod to an uproarious controversy that erupted when Yaya wanted to bring a wild possum she’d trapped in her yard up here for the kids to play with; I won, and the varmint stayed in Houston, but she called the cat Possum after that.

The last time I saw the cat was on Good Friday, almost three years to the day after she first came into our lives. I’d often agonize about how we’d take care of her on our tight budget; it never occurred to me that she might just disappear. I would have expected that I’d feel more relief about not needing to deal with the cat anymore, but I’m finding that I actually miss her. It was part of my morning routine to hear the soft padding sounds of her paws on the back window when I first walked into the kitchen each day. It’s weird to be greeted with silence.

So goodbye to Emma White House Possum Snowball, wherever you are. We’ll miss you.