It’s stressful to be a god 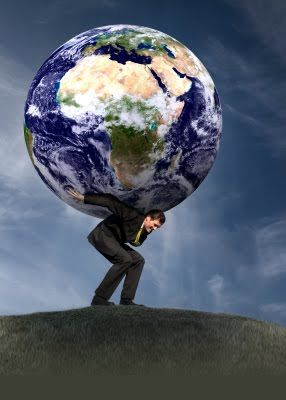 During Lent, I resolved to pray more frequently. I committed to setting aside more dedicated, focused prayer time, and I did a pretty good job of sticking to it. I prayed about how I wanted certain events to turn out in my life, what I needed for spiritual growth, my worries about various situations that weren’t going the right direction, etc. — I poured it all out in prayer.

I found it odd, then, when a couple weeks into Lent I felt more frustrated than ever.

In fact, I found myself with that certain angsty lack of peace that I’ve come t recognize as a symptom that something is out of whack in my spiritual life. How could that be, given that I’d actually been praying more?

One afternoon I was just about to settle in for prayer time, a million little problems and concerns weighing on my mind that I wanted to pray about, when I came across some spiritual writing that led me to one of those “this should have been totally obvious but was actually a major revelation” moments. I realized:

I hadn’t been thinking about Christ.

Of all the extra minutes I’d poured into prayer during Lent, not a single one had been dedicated to thinking about who God is, what he’s done for us, who we are in comparison to him, what his nature is like — to be honest, I was barely aware of his presence. To read a transcript of my prayers, you would have thought that the One to whom I was speaking was my wish-granting genie.

Obviously, it’s a good thing to tell God everything that is on your mind; the mistake I made was that that was the only thing I was doing in prayer. And the result was that my own concerns began to grow and grow and grow in my mind…and my understanding of God began to shrink. The end result was that I’d made myself a god.

When I realized that that afternoon, I dedicated that entire prayer time to thinking about the life of Christ. I spent a while meditating on his miracle at the wedding at Cana, then I lost myself in the mystery of his baptism. When my prayer time came to an end, I hadn’t had any time to think about my own problems. When I realized that I’d focused on God instead of myself, I was overwhelmed with a certain feeling:

In his great book Praying with Icons, Jim Forest says that “contemplation of the face of Christ can save us from the hell of fear-driven selfishness.” And that’s exactly what I’d been experiencing: the hell of selfishness, driven by fear that I would suffer too much or I wouldn’t be happy or things wouldn’t go the “right” way if I wasn’t in control.

As I know from an entire lifetime of making myself a god, at first it’s fun. The world revolves around you! You don’t need to mess around with sticky concepts like trust or humility — you set your life up so that you control everything since, after all, you know what’s best. There’s no room for patience, since your will must be done immediately. You certainly don’t need to waste any time on charity since nobody has it all figured out like you do.

But as time goes on, and your status grows in your own mind, you start to feel the weight of it all; when you make yourself a god, you assume the responsibilities of a god: being everywhere at once, taking care of everything, having an answer for every possible dilemma. You must plan, plan, plan to make sure that everything goes the right way, and then come up with infinite backup plans in case those plans don’t work out — after all, you alone hold the entire universe in existence.

As Lent went on, I found that the more deeply I delved into Christ’s birth, earthly life, death and Resurrection, the less interest I had in thinking about all those other things that bothered me. I found bottomless peace in the contemplation of who God is, who I am, and what our respective responsibilities are. I fell back and landed in the soft place of understanding that I am not the one in charge; and, I see now, I wouldn’t even want to be.

Happy Easter, everyone! It’s good to be back.
If you’d like to share anything you learned during Lent, I’d love to hear it!

« Some notes about this week
Safe miracles »