The Rosary: I’ve been doing it wrong!

Or, How I Was Reminded that Focusing on Christ Keeps You Sane 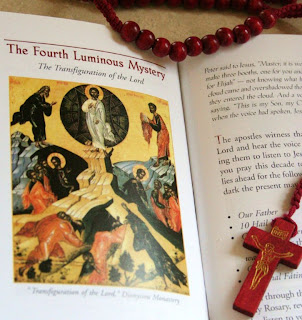 It’s embarrassing to admit that I’ve been praying the Rosary incorrectly for four years. At first it was really bad: when I was researching Catholicism I constantly heard about the astounding power of the Rosary, so I decided to give it a shot. I’d sit next to my son’s bed at night with the beads in my hand — the only problem was that I didn’t have any of the prayers memorized. Undeterred, I’d make my best guess when I forget the details, so it would often sound something like, “We believe in God, the Father Almighty, Creator of earth…and of all the other stuff too, like the planets…and Jesus his Son…and, umm…” at that point I’d start rattling off whatever the Church taught that I’d come to agree with, tossing some stuff about transubstantiation and purgatory into the Creed.

Yeah. It was a mess.

So when I actually got most of the prayers memorized, it was such a step up that I figured I was home free. I’d announce each mystery, say the prayers, and that was that. I didn’t exactly enjoy praying the Rosary (sometimes I would rush through the prayers so quickly that I’d recall Darwin once quipping that he had an Irish grandmother who just about got rope burn from her eight-second Hail Mary’s) but this type of prayer brought such tremendous grace into my life that I kept it up anyway.

Then, a few weeks ago, I was in Adoration and had one of those moments where something I should have known and did kind of subconsciously know finally got through to me and ended up being a major revelation. I suddenly realized:

I never really meditated on the mysteries.

Now, anyone who’s ever prayed a Rosary probably just said: “Seriously?” After all, that’s the entire point of the thing: to draw yourself into the mysteries of Christ’s life, death and Resurrection. How could a person miss that? All I can say is: I know! I would even tell people that when I explained the Rosary to them! I even wrote about how powerful it was when my favorite Rosary CD brought me into each mystery! So how it was that I went for four years almost never spending more than a couple seconds actually meditating on the mysteries when I prayed the Rosary on my own, I do not know. (Actually I do know, and it has to do with my tendency towards ADD making my attention span comparable to that of a toddler who’s been mainlining sugar, but that’s another story.)

The revelation occurred when I was in the Adoration chapel, looking at my Rosary prayer sheet from Rosary Army. I noticed the quote on the very center of the page that I’d seen a dozen times but had never actually read it. It said:

Without [the Rosary’s] contemplative dimension, it would lose its meaning…Without contemplation, the Rosary is a body without a soul, and its recitation runs the risk of becoming a mechanical repetition of formulas, in violation of the admonition of Christ: “In praying do not heap up empty phrases as the Gentiles do; for they think they will be heard for their many words.”

Umm…guiltily. Actually, what I’d been doing was worse: I’d drift into thinking about my own problems and intentions while I said the Hail Mary’s; in other words, I was meditating on myself while I prayed the Rosary.

This was the ah-hah moment I referred to in my post from last week where I talked about the stress that comes with making yourself a god. When I turned my attention away from myself and started focusing on Christ instead, the relief was indescribable. It brought to mind a point Thomas Merton made when he said:

To consider persons and events and situations only in the light of their effect upon myself is to live on the doorstep of hell.

Of course it’s important to tell God everything that’s on our minds, but, as I said in that other post, the problem was that those were the only types of prayers I was saying. I’d ended up making my needs and desires and plans so huge that I’d taken over God’s role in being responsible for the entire universe. So when the Rosary finally broke me out of that, it was like being freed from a prison. I felt like I had real inner peace for the first time in a long time.

I should note that I do think that God blessed my initial efforts at the Rosary. As Elizabeth Mahlou pointed out in her great comment to this post, God doesn’t play games of “Gotcha!”, punishing us for making mistakes in form despite good intentions. God managed to use even my misguided actions, some of which were probably the very definition of “vain repetition, ” to bring me closer to him.

I still see that same grace in my life through the Rosary now that I’m actually meditating on the mysteries; the main difference is what it’s done for my peace of mind, thanks to a renewed understand of Jesus, what he’s done for us, and who I am in relation to him. Praying along with the Church by meditating on the prescribed mysteries for that particular day — as opposed to what I might feel like thinking about — allows God to lead me in new directions. I have the freedom to roam wildly with Christ in all the different moments of his life, yet the structure to make me ponder elements that I might not have sought out on my own.

I finally get why so many people are such passionate advocates for the Rosary: not only is there that unmistakable grace that comes with it, but, if you pray it as it’s supposed to be prayed, it’s not only a portal into the life of Christ, but a safeguard against the hell of making yourself a god.

Image from the book Praying the Rosary by Amy Welborn and Michael Dubruiel.