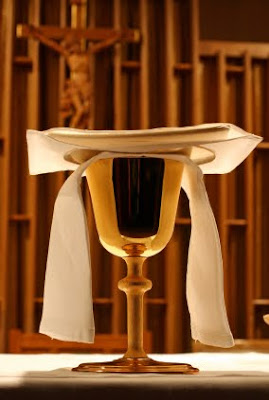 I can’t think of a time in recent memory that I have had less fun than I did on Easter Sunday. It was the day I found out that feeding four young children a breakfast of donuts and Easter basket candy results in the same behavior you’d expect to see if you gave crack to monkeys. It was the day that I learned that my husband and I are evidently descended entirely from warlike peoples, our genes leaving our offspring without a shred of proclivity towards civilized behavior or docility. It was a day that I was blessed with bountiful opportunities to work on the sins of pride, wrath and despair, all within the span of an hour.

It started out nicely enough. My mom had bought a new suit for my five-year-old son, and identical teal floral dresses for my three daughters, all ages three and under. After going through the process of wrestling the sugar-manic kids into their fancy clothes and finding matching socks and dress shoes for each one of them, we actually managed to get out the door in time to arrive at church a little early.

We got a seat in a pew towards the front, and my two toddler girls immediately started getting fussy. It was an ominous sign, considering that Mass wouldn’t start for ten minutes.

On top of their breakfast devoid of a single nourishing molecule, they hadn’t slept well the night before. I looked over and saw my three-year-old daughter enact the universal sign for “YOUR ENTIRE DAY IS ABOUT TO BE AN EPIC FAIL” by lashing out in frustration and then rubbing her eyes. She was cranky. It was because she was losing control from being overtired. This was going to be bad.

The choir started belting out a joyous hymn, and the entrance procession began, a deacon holding up a large gold-plated Bible as he walked down the center aisle. Everyone stood, the traditional Christian posture indicating readiness to hear and respond to the Word of God. Everyone except for my two toddler daughters, that is, who threw themselves on the floor when I asked them to stand.

Their behavior got worse and worse, and after a few minutes I left my husband with my son and the baby so that I could take the two girls to the “cry room, ” a glass-walled soundproof room within the sanctuary. I nodded hello to some parents I recognized from Mother’s Day Out, whose children were coloring quietly in their seats. I settled us into some chairs at the front. “Should be fine from here, ” I thought fatefully. At least their whining, harrumphing, and occasional shouts of “no!” whenever I so much as looked at them wouldn’t disturb the congregation. We made it through the first two Scripture readings, and I even managed to get the girls to sing along with the Psalm.

Then it was time for the Gospel — and not just any Gospel reading, but the account of the glorious Resurrection that we were there to celebrate! We all stood, and I traced the sign of the Cross over my forehead, lips and heart, in the traditional sign of desire that Christ’s words might be on my mind, on my lips, and in my heart. I was ready to enter into the mysteries of the Word.

I closed my eyes. Speak, Lord, for your servant is listening.

I opened my eyes just in time to see a flash of teal as my two-year-old daughter football-tackled her sister, the two of them rolling across the floor like a pastel-colored, screaming boulder. Hair was pulled, shoes were kicked off, and the shrieking was enough to shatter an eardrum. If the other people in the cry room could have heard me, I would have shouted over the noise to explain that I found these two feral children living in the woods behind the church — in, umm, matching designer dresses — and took pity on them and brought them in. Instead I just dragged the girls outside, attracting the full attention of the thousand or so people in attendance when the girls’ screams filled the sanctuary in the time it took me to get from the cry room to the exit.

It took about fifteen minutes to get them calmed down. By the time I returned to the cry room I’d missed the Gospel and most of the priest’s homily. The rest of the Mass was better, in the sense that it was the kind of day where only having to hiss “don’t lick the chair!” three times was a step up. We made it through the consecration, Communion and the final blessing; I even managed to keep my composure when one of my daughters asked me during the closing hymn what her “special church tweet” was going to be, referring to the goodies we sometimes give the kids after Mass when they behave well.

When we got outside, the three of us looked like we’d been through some sort of battle. My skirt was hanging lopsided from having it yanked on so many times. The girls were each missing a shoe, which I carried under my arm, and their bows dangled limply from their hair.

“Wow, that was a catastrophe, ” my husband commented when he saw us.

I realized as we walked back to the car that, oddly enough, I didn’t feel like it was a complete failure. I was puzzled by my own reaction that I felt like it was actually a fulfilling experience.

I thought back through the Kafkaesque memory reel of the preceding hour, and I think it was then that I understood the wisdom and beauty of the Eucharist more than I ever had before.

When I was first researching Christianity I read some of the writings of the early Christians, and felt like I had stumbled across a very odd religion here. They all seemed to see their church services as revolving around Communion, and they seemed to think that this Eucharist, the bread they ate at Mass, was, literally, the body of God incarnate.

After Ignatius of Antioch found out he was to face execution for being a Christian, sentenced to die in front of jeering crowds by being attacked by lions in The Coliseum around 100 A.D., he exclaimed, “I take no pleasure in corruptible food or in the delights of this life. I want the bread of God, which is the flesh of Jesus Christ, who is the seed of David; and for drink I want his Blood which is incorruptible love.” In another letter he referred to the Eucharist as “the medicine of immortality, and the antidote to prevent us from dying.”

“We do not consume the eucharistic bread and wine as if it were ordinary food and drink, ” Justin Martyr wrote around 150 A.D. “The food that our flesh and blood assimilates for its nourishment becomes the flesh and blood of the incarnate Jesus.”

My initial reaction to this stuff was to get all John 6:60 about it. It was a hard teaching.

After enough reading, I eventually came to an intellectual acceptance of the idea of God’s own flesh being made present at the Mass, though I still felt somewhat puzzled by why God would do something so outlandish and why it was necessary in the first place.

Over the past few years, though, something changed. As I’ve said before, the more I received the Eucharist, the more I understood in both my mind and my heart that this is indeed life-giving food for the soul. I’ve come to see the genius of God giving himself to us in such a primal way, and what an unfathomable gift it is that he strengthens us with his own physical being.

And it has never been more clear than on Easter Sunday.

Church that day was more about survival than enjoyment, with 100% of my brain power and emotional energy going to wishing that straight jackets came in sizes 2 and 3T. I wasn’t able to even hear the Word, let alone think about it, and any deep contemplation of the Resurrection was out of the question. And yet when the priest placed the Eucharist on my tongue, I received Jesus Christ himself — who is the Word and who is the Resurrection.

As I walked away from the church building, disheveled and frazzled, I smiled when I thought back on my very un-fun morning at Mass. I was overwhelmed with relief to realize that I didn’t need to be able to feel happy emotions at church (or even be able to think much at all), and still I’d receive everything I could ever want or need.